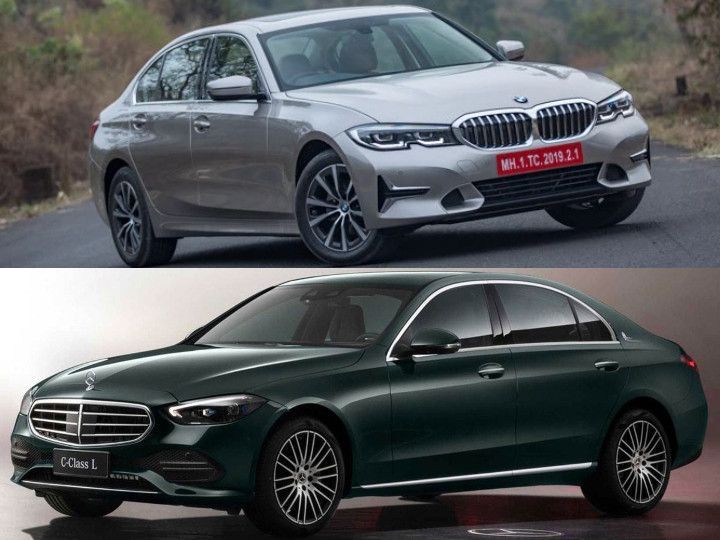 The BMW 3 Series Gran Limousine (GL) is currently the only long wheelbase model in its segment in India. It offers superior rear seat comfort for the chauffeur-driven, while also retaining the well-known BMW handling prowess. Mercedes has now unleashed the 2021 C-Class L (long wheelbase variant) at the ongoing Auto Shanghai and from the looks of it, it could steal the Bimmer’s thunder. So in this report, we’ll be comparing both these long wheelbase powerhouses on paper.

Which One Has The Longer Wheelbase?

While the C-Class L is longer than the 3 Series GL, the Mercedes’ wheelbase is shorter than the BMW by a whisker. So in the real world, the rear legroom of both models should suffice. The C is also slightly narrower, but taller than 3 so headroom shouldn’t be an issue for six footers.

Those opting for long wheelbase models tend to spend most of their time in the rear seats. So it’s crucial the rear cabin offers a decent set of features for a comfortable experience. Both models here come with charging ports, climate control, and an armrest with storage.

The Mercedes, however, goes an extra mile with soft pillows for that extra bit of comfort. That said, we wish both cars came with rear sun blinds. Not only do they protect you from harsh sunlight, but also ensure added privacy.

Both models get a few common essential features including a touchscreen infotainment system (with their respective UIs), a digital driver’s display, tri-zone climate control, a sunroof, powered front seats, a branded audio system, ambient lighting as well as Android Auto and Apple CarPlay connectivity. Truth be told, both models barely get any exclusive features to sway your opinion.

What Powers These Sedans?

The C-Class L, which is offered only in China as of now, comes with two petrol engines only. So we have compared it with the 330Li in this test.

The 3 Series GL is also offered with a 190PS 2.0-litre diesel engine in India. If Merc decides to launch the C-Class L in the country, it could be provided with an oil burner considering diesels are still relevant despite stricter emissions regulations.

It’s yet to be known if Mercedes intends to launch the C-Class L in India. If it does, the C-Class L has all the right elements to fight it out with the BMW 3 Series GL. A diesel engine should also give the Mercedes C-Class L an added advantage, but at the end of the day, it comes down to pricing. If Mercedes manages to price it similarly or undercut the 3 Series GL (Rs 51.50 lakh to Rs 53.90 lakh, ex-showroom), it could have a winner on its hands.