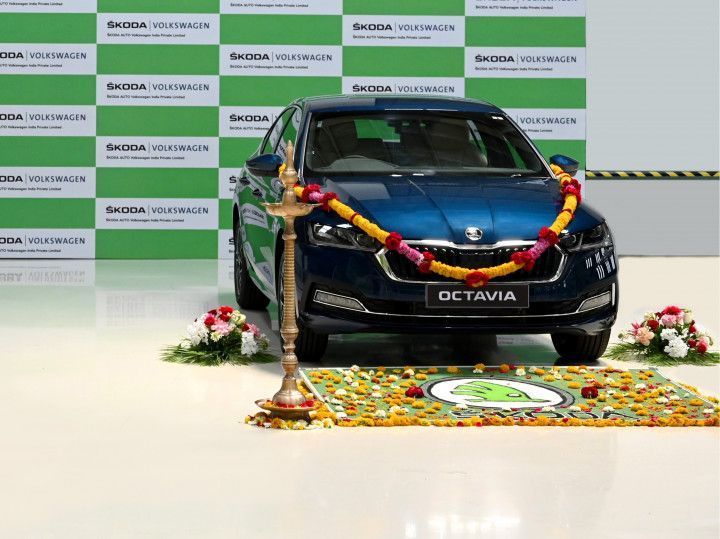 The fourth-gen Skoda Octavia is all set to make a comeback by the end of April. Production has begun at the carmaker’s Aurangabad facility, and vehicles have already started reaching dealerships ahead of launch. Test drives are likely to start soon.

The new Skoda Octavia is based on the Volkswagen Group’s MQB EVO platform. Despite the wheelbase measuring the same at 2686mm, the new Octavia is 4689mm long, which is 19mm more than before. It is also more powerful than the India-spec third-gen model, thanks to the VW Group’s 190PS 2.0-litre turbo-petrol engine paired with a 7-speed DSG. However, the fourth-gen Octavia will be a petrol-only offering. So, if you’re looking for a diesel, you only have the Hyundai Elantra, which gets a 115PS 1.5-litre diesel engine.

A smaller 150PS 1.5-litre turbo-petrol engine could be introduced later for those looking for an affordable Octy!

The Czech carmaker’s classic butterfly grille and C-motif tail lamps (with crystal-like detailing) find their way into the Octavia. The grille sits wider and lower, flanked by conventional single-piece LED headlamps. Except for the turbine-like alloy wheels, the car’s side profile looks similar to that of the third-gen model. At the back, the Superb-inspired styling is evident from the split tail lamps and angular tailgate.

The interiors have been designed afresh. The new and larger infotainment system does away with most of the knobs on the centre console as all functions can be accessed through it. This lends the cabin a neat and minimalistic look. The digital driver’s display ups the style quotient, while Skoda’s new two-spoke steering wheel (with those lovely metal knobs) tops off the design.

Fun Fact: The new Octavia utilises a shift-by-wire system instead of a traditional gear-lever!

The new Skoda Octavia is likely to be priced from Rs 20 lakh (ex-showroom). Follow this space for more updates on the upcoming sedan.