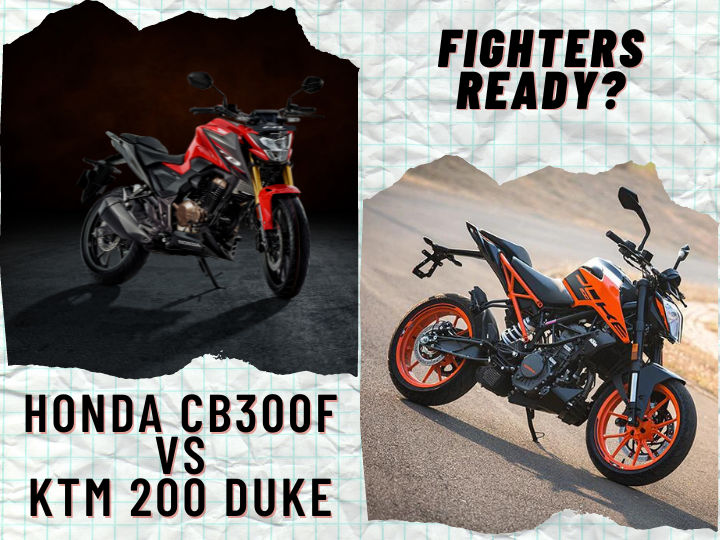 Entry-level streetfighters–there’s a dime and dozen of those. But the ones actually strapping performance and thrill–there’s dearth of them. While KTM has ruled the roost with the 200 Duke with an approachable price tag of Rs 1,91,693 ex-showroom Delhi, Honda Big Wing enters the ring with the new CB300F, a premium 300cc streetfighter with enough performance to rattle the Austrian’s cage.

Streetfighters are all about that aggressive, brawler look. While the KTM 200 Duke dons a sleek, laser-cut look, the new Honda CB300F resorts to a traditional beefy Japanese style look. It simply looks brawnier with its head tucked inside those flared tank shrouds.

While the Duke gets a basic halogen headlight with fang-like LEDS strips, the Honda gets a modern LED unit that’s inspired by the Honda CB500F. That said, indicators and tail light on both are LED units.

The 200 Duke is powered by a smaller albeit more advanced 199.5cc, single-cylinder, liquid-cooled motor which is mated to a six-speed gearbox and churns out 25PS and 19.3Nm. The Honda on the other hand makes 24.47PS and 25.6Nm from its 293cc, 4-valve, single-cylinder, air-oil-cooled engine which too is mated to a six-speed gearbox. However, the CB300F gets slipper clutch and Honda’s Selectable Torque Control (read traction control system), features the Austrian misses out on.

The KTM 200 Duke features a single 300mm and 230mm disc at the front and the rear, and its dual-channel ABS is switchable with the help of ‘SuperMoto’ mode which disengages the safety net at the rear. Honda on the other hand has given the CB300F a smaller 276mm and 220mm single disc setup front back respectively and the dual channel ABS is not switchable.

Here is where the KTM feels a little dated to be honest. The basic back-lit LCD console just feels old and does not blend well with the new design leap. It misses out on simple stuff like Bluetooth navigation and USB charging.

The Honda however feels more premium in that sense with its brick-like LCD instrument cluster with Bluetooth connectivity, voice control and type-C USB charging.

The Honda CB300F will be sold in two variants and three colours. The Deluxe variant will cost Rs 2,25,900 and the Deluxe Pro will set you back by Rs 2,28,900 (all prices are ex-showroom Delhi). Sure the KTM misses out on features and extra displacement, but streetfighters are all about performance, and in that sense it still offers great bang for the buck. 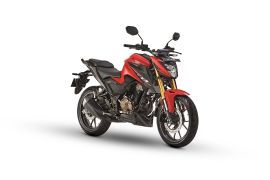