Tata Avinya EV Concept Revealed: All Details You Need To Know In 10 Images

The Avinya concept will be the first Tata car to be based on the dedicated Gen3 EV platform, meaning it will only be a pure EV 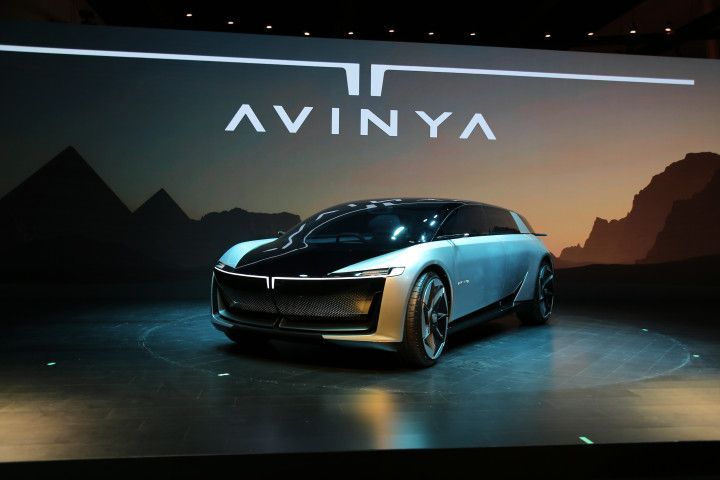 It’s raining concepts from the house of Tata Motors. After making a splash with the Curvv SUV-coupe, Tata Motors has taken the wraps of its latest concept, the Avinya. It will be the first battery-powered vehicle based on Tata’s dedicated Gen3 EV platform, which means it has been conceptualised as a pure electric vehicle only. Further, Tata says vehicles based on this concept will enter production in 2025.

At around 4.3 metres long, the Tata Avinya is a mix of an MPV, SUV, and hatchback. But if you look closely, the concept’s wheels have been pushed to the extremes, to extract as much space as possible. Main thing helping its case here is the dedicated EV platform, which allows for better packaging.

Like the Curvv, the Avinya gets a DRL that spawns the entire width of the car. However, there’s one difference and that’s the Tata logo that has been integrated in it. Just below the DRL is the super large grille that dominates almost the entire fascia. It gets LED lighting elements a la Audi’s latest concept, the Urban Sphere.

The Avinya’s proportions make the side profile look more MPV. It’s relatively a clean design, until and unless you open the door, whose butterfly-like style is identical to Rolls Royce cars. Then there’s the roof, which looks like it’s floating, thanks to the large glass roof finished in a dark hue. And while the concept sits on large 22-inch alloys, we expect them to be toned down in the production model.

The hatchback essence can be seen in the rear three quarters. Like the front, the rear features an LED bar running through the width of the concept and forms the Tata logo as well. There is a subtle spoiler, and the tailgate is partly finished in black, a la the Altroz. The sporty bumper with black touches rounds off the design.

Cars interiors have been becoming more and more screen-laden, but Tata has taken a vice versa approach here. Rather they are limited to the small screen on the steering wheel and a sleek unit that runs along the width of the dashboard that shows all the vitals. Two more screens are there on the sides of the dashboard that relay information from the cameras outside.

So the next obvious question is how do we use the features of the vehicle, right? Well, voice commands will take priority here, as the main reason for an almost screen-less interior is to save screen time. Furthermore, it boasts speakers located in the headrest.

Tata has given an air dispenser in the cabin to keep the ambience soothing and nice. Plus, the electric concept will boast features like the latest suite of connected car tech and Advanced Driver Assistance Systems.

The Tata Avinya will be based on Tata’s Gen3 platform that is dedicated for EVs, meaning it will purely be a battery-powered vehicle. This is a skateboard platform, meaning it will support multiple body styles and multiple configurations, including rear-wheel drive, all-wheel drive, and different types of battery packs. Speaking of which, Tata says the minimum real-world range of vehicles based on this platform will be around 500km.

The Tata Avinya concept is a preview of what future Tata models from the same platform will look like as and when they go on sale in 2025. So stay tuned, as more details will follow soon.