All The Juicy Details Of The Honda Hornet 2.0

Japanese two-wheeler giant Honda has launched the new Hornet 2.0 in India today. Doesn’t that name remind you of another Japanese bike? Anyway, moving on, it is the most premium motorcycle in Honda’s portfolio to be manufactured in India and also its most premium offering in the sub-200cc segment. The new Hornet 2.0 will be powered by a new 184cc motor. Here are some interesting details of the Honda CB Hornet 2.0 which replaces the CB Hornet 160R.

Engine
The biggest talking point of the new CB Hornet 2.0 is its engine as it’s the second-largest displacement Honda to be built in India after the now-discontinued Honda CBR250R. The new Honda motorcycle is powered by a 184cc, single-cylinder motor that produces 17.3PS and 16.1Nm of peak torque with a 5-speed gearbox. In comparison, the Honda CB Hornet 160R’s engine was rated at 15.09PS and 14.5Nm. We had hoped the new bike would be powered by a 200cc powerplant, however, the engine specs are similar to the Hero Xtreme 200R and the Hero Impulse.

Styling
The styling of the new bike is more of an evolution of the CB Hornet 160R’s design, which isn’t a bad thing by any means. You get a sharp LED headlight, a chunky fuel tank with large tank extensions, and a premium-looking 3D Honda badge. The split seat, stubby muffler, engine cowl, and the X-shaped LED tail light enhance the streetfighter styling. The one element that really elevates its street cred is the gold-finished USD fork. It also features redesigned alloy wheels with a beefy 140-section rear tyre. The Hornet 2.0 will be available in four colour options: black, red, blue and grey.

What the Fork!
Another big surprise on the CB Hornet 2.0 is the inclusion of a USD fork, a first for any Honda motorcycle manufactured in India. It also makes the new Honda bike, the second sub-200cc bike after the KTM 125 Duke to feature a USD fork. The diamond-type frame has been carried forward from the Hornet 160R and so has the monoshock suspension. For braking, the Hornet 2.0 features a 276mm dia petal disc at the front and a 220mm petal disc on the rear wheel. It gets a single-channel ABS, which is a bit disappointing! Honda hasn’t shared the seat height which leads us to believe that it’s on the taller side. The new Honda motorcycle weighs 142kg and has a 12-litre fuel tank.

Features
The Hornet 2.0 is the first Honda motorcycle in its India portfolio (barring the imports) to feature all-LED lighting including the indicators. It also gets a hazard switch and all-digital LCD instrument console with a gear position indicator, another first for a sub-200cc Honda bike. The display has five different settings for brightness. The keyhole is positioned on the fuel tank. The Japanese brand has proudly mentioned that the Hornet 2.0 features an engine kill switch, welcome to 2020 Honda.

Price and Rivals
The Honda Hornet 2.0 is priced at Rs 1,26,921 (ex-showroom Delhi). Compared to the CB Hornet 160R, that’s a steep price hike of Rs 29,000, but we must not discount the fact that it gets a BS6 update, makes a step-up in the segment, and sports better features. Its only direct rival is the Hero Xtreme 200R, but it seems Hero won’t be giving it the BS6 update and will instead focus on the new Xtreme 160R. With respect to pricing, the Hornet 2.0 is uncomfortably close to much more advanced and powerful bikes such as the TVS Apache RTR 200 4V (Rs 1.30 lakh) and the Bajaj Pulsar NS 200 (Rs 1.31 lakh). 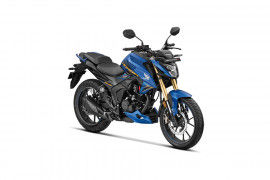