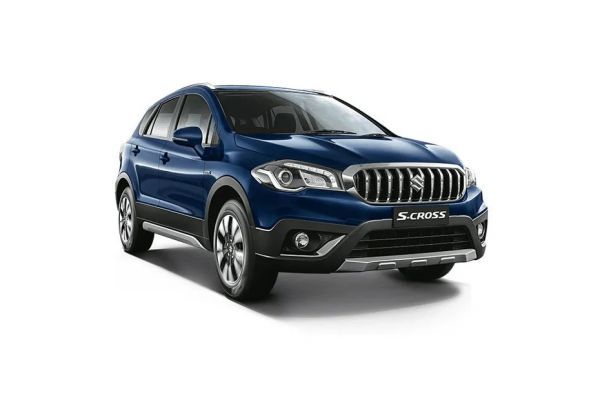 Maruti Suzuki has unveiled the new BS6 S-Cross crossover in India at Auto Expo 2020. It now comes with a petrol-only powertrain, driven by the BS6 K15B engine from Maruti Suzuki. The engine produces 105PS of power and 138Nm of torque which is 30PS more and 52Nm less than the 1.3-litre diesel S-Cross. The carmaker has slightly revised the front and rear fascia of the S-Cross with a redesigned chrome grille and bumpers. The crossover-SUV will rekindle rivalries with the Hyundai Creta, Nissan Kicks, and Renault Captur once launched. We expect it to hit the market later this year. Prices are likely to be higher than the current model which retails from Rs 8.81 lakh to Rs 11.44 lakh (ex-showroom).

Maruti Suzuki has dropped the prices of various models in India by Rs 5,000. The price reduction is made possible by the government's recent reduction of corporate tax. All the variants of S-Cross are also subject to the price cut.

After the announcement that Maruti will discontinue all their diesel engines post April 2020, the S-Cross is all set to get a new petrol engine. The current 1.3-litre DDiS200 engine will most likely be replaced by the Ciaz's 1.5-litre K15 Smart Hybrid petrol unit and this updated S-Cross will make its debut at the 2020 Auto Expo.

Earlier, Maruti Suzuki had updated the S-Cross with a couple of new features. The news comes shortly after the launch of the new Ciaz facelift. Quite a few features will be carried over from the C-segment sedan and additions will be made to the standard equipment as well, including the TFT MID (multi-info display) as well as the speed alert system. Additionally, the base Sigma variant will now get wheel caps instead of bare steel wheels.

However, it’s the Delta variant that gets a majority of the updates. It will now come with push-button start-stop along with keyless entry, cruise control, alloy wheels and electrically adjustable and retracting ORVMs. Other added features include rear wash and wipe with demister and auto AC. The Zeta and Alpha variants, however, get no changes whatsoever. Also, the SmartPlay infotainment system is only available with the top-spec Alpha variant.

On the powertrain front, the S-Cross will still be powered by the same 1.3-litre diesel engine, which makes 90PS and 200Nm, mated to a 5-speed manual gearbox. Expect Maruti Suzuki to hike the prices ever so slightly. Currently, the crossover is is priced between Rs 8.6 lakh to Rs 11.32 lakh (ex-showroom Delhi).

Maruti Suzuki S Cross is amalgamation of two different body styles and it claims to provide the best of both worlds, i.e., luxurious sedan and rugged SUV. Exteriors of the S-Cross feature projector headlamps and the vertically slatted grille lends menacing character to the car. Maruti's SmartPlay infotainment system is the highlight of the S-Cross’s quality cabin and you will be pleasantly surprised with the plenty of cabin room. Boot is equally capacious and the best part is the sensible way it has been laid out to maximize the capacity. Under the hood, Maruti has employed Fiat-owned 1.3-liter multi-jet diesel engine (DDiS in Maruti Speak) putting out 90PS/200Nm. This gasoline engine now features the Suzuki’s smart hybrid system and comes mated to 5-speed manual gearbox. Pitted against the likes of Renault Duster and Hyundai Creta, 2017 S-Cross can be had in the price range of Rs 8.49-11.29 lakh (ex-showroom, Delhi).

Maruti Suzuki has ditched the fun-to-drive 1.6-litre engine. The 1.3-litre DDIS200 is your only choice now. The four-cylinder motor makes 90PS of power and 200Nm of peak torque; just like before. The manufacturer has added their SHVS mild hybrid tech which makes the S-Cross 7 per cent more efficient at 25.1kmpl. The engine is available with a 5-speed manual gearbox only. There’s no automatic transmission on offer, and Maruti says it’s unlikely the S-Cross will feature an automatic in the future.

The S-Cross is available in four variants - Sigma, Delta, Zeta and Alpha. The base-spec variant is best avoided as it skips out on essentials such as a music system. It’s best to choose between the Delta and the Zeta. We’d recommend the Zeta since it ticks all the right boxes.

Maruti Suzuki have taken the term “facelift” a bit too seriously with the S-Cross. In an attempt to fix the crossover’s droopy face, most of the updates are focussed at the front. So, there’s a new upright chrome grille, a new set of LED projector headlamps and a resculpted bonnet. From the side and the rear, the S-Cross is unchanged save for a new set of alloy wheels wrapped in wider rubber, and new LED tail lamps. It is still no SUV, but it’s got a bit of that wow-factor it once lacked.

Changes to the cabin are of the blink and you miss it variety. The silver highlights have been replaced by a satin one, and the texture on the dash is slightly different. The top-spec Alpha variant is loaded to the gills with features including a 7.0-inch touchscreen with Android Auto and Apple CarPlay, automatic climate control, steering-mounted audio controls and leather upholstery. The S-Cross is a genuine 5-seater with ample room in the rear seat. The boot isn’t all that big at 353-litres, sadly. Talking of safety, all variants of the crossover get dual airbags and anti-lock brakes (ABS).

Renault Duster : The car that started it all, the Renault Duster is the only modern crossover in the segment to feature an AWD system. Its butch design, adequate space, CVT transmission (petrol), AMT (diesel) and all-weather ability make it score a lot of brownie points in the segment. Interior quality and limited service network make it less appealing.

Nissan Terrano : : The Duster's better-looking cousin (for some), the Terrano suffers from being too overpriced for its own good. It does get a diesel AMT variant which is a good option for those looking for a convenient urban SUV.

Renault Captur : The Captur brings some style to a segment of boxy SUVs. If you want to stand out in the crowd or while munching highway miles - the big Renault is worth a dekko!

The S-Cross might not be your traditional square SUV, but it nails the basics of practicality, space and comfort. But then, that’s what we expect from Maruti, don’t we?