The big Jag has a small 2.0-litre motor under the bonnet. Does that take away from the Jaguar experience? 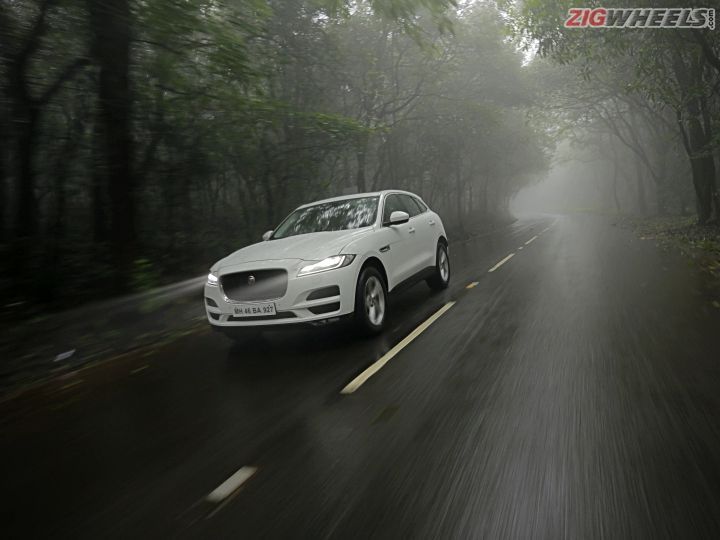 The F-Pace is a genuinely puzzling SUV. For a vehicle its size, it shouldn’t behave the way it does. Underneath the big-cat SUV clothes lies a little (okay, maybe not literally) agile kitten that’s ready to pounce. The R-Sport version we tested a while back was a capable handler and had a bucketful of punch to boot. We aren't expecting the 20d to be just as good. We're simply figuring out if it offers an agreeable compromise.

Rs 76.83 lakh, ex-showroom, which translates into a Rs 97.91 lakh on-road price. Spec your F-Pace Prestige the way our test car was, and you'd be writing down a near-eight-figure sum on the cheque. For the record, the car you see in pictures was decked out with quite a lot of goodies from the optional catalogue. This includes the all-LED headlamps, 19-inch alloy wheels (18s are standard), reclining rear seat, and the bigger 10.2-inch touchscreen paired with the LCD instrument cluster.

It still misses some features we expect in a car that costs as much, including bits like ventilated seats, a memory function for the electric seats, four-zone air-conditioning and electric adjust for the steering. You can get all of these, provided, you guessed it - you scribble a larger amount on the cheque. Gulp!

Does it feel special?

Undoubtedly. There's method to Jaguar's madness. And, most would happily sign away obscene amounts of money for the F-Pace purely because it's got the knack of making you want it. On a personal level, I'm not a huge fan of the design. But the number of heads that this thing turns is astounding. A kid got whacked on the head by his accompanying adult because he nearly uttered the f-word when he saw it standing tall next to him. I have a hunch he was going for 'F-Pace' but got a high-five on his head anyway.

It's not desperately pretty, but it definitely demands attention. And we've got similar thoughts about the insides. The layout is functional and easy to get used to. While there's not much to complain about in terms of fit, we wish the build quality was bumped up a notch. The buttons on the steering wheel and the ones on the centre console feel out of place on a big Jag.

There's a lot in the options list to get pensive about, but what should be a no-brainer is the inControl Touch Pro infotainment, paired with the Meridian sound system. Tick the 825W audio system if you're feeling extra generous and want to treat your ears. The touchscreen itself is among the best you'd use, but we did miss Android Auto/Apple CarPlay. Mainly because the onboard navigation is a hit or a miss. The interface isn’t the most intuitive to use, and honestly, Google Maps is just plain quicker. That said, you can have the 12.3-inch virtual instrument cluster display the whole map so viewing it in your peripheral vision is sufficient to see where you are going and you don't have to move your line of sight. Thoughtful.

What's commendable is that the Jaguar isn't a triumph of form over function. It's a lovely blend of both. The door bins will happily swallow water bottles, and the lockable glovebox is just the right size for your plus-size iPad. There's some more storage under the armrest, and the sliding cover (which is optional, by the way) will give you access to a couple of cup holders. There's a 650-litre boot for your golf bags, and enough space for the golf cart itself if you fold the second row of seats.

By all means. But, don't have astronomical expectations from it. A 2.0-litre 180PS/430Nm motor lugging a near 2-tonne weight doesn't sound all that exciting on paper, and it doesn't defy laws of physics (and logic?) on road. Naturally then, 0-100kmph takes a leisurely 10.32 seconds.

But, what it does do brilliantly, is cruise. It's among the rare breed of Jaguars that doesn't really egg you on to go pedal-to-the-metal all the time. Unlike the 3.0-litre variant this one doesn't have the mountain of torque to pin you to your seat.

In Normal mode the gearbox seems confused and ends up holding onto revs a notch longer than needed. The Eco mode felt best for pottering around town. The throttle feels a lot more linear and relaxed as the peaks in the power range are dulled out significantly. Dynamic mode is the diametric opposite, that keeps the four-pot where it's at its best. The throttle feels snappier and you'll feel a bit of weight added to the steering wheel too.

Speaking of which, the F-Pace is a really obedient kitty cat. You can get the nose pointed exactly where you want it. Yes, the steering feels artificial at low speeds, but there's more than enough meat in it when you drive spiritedly around twisties. The suspension feels just right, and although it feels slightly top-heavy, it doesn't really roll too much even when it's dunked hard into a corner.

Grip from the Pirelli tyres is astounding, to say the least. But, much like the R-Sport, the traction control is a bit too obtrusive here as well. But we didn't bother switching it off this time around - we simply backed off. That's because the chassis feels underwhelmed by the engine, lacking the punch to let you stitch switchbacks together. Some extra helping of power would've really made the driving package a whole lot better.

The power (or rather the lack of it), means it isn’t a thirsty cat. On test, the F-Pace 20d returned a respectable 11.05kmpl inside the city, and 16.81kmpl on the highway.

We'd gladly toss the keys over to the chauffeur inside the city. The F-Pace is questionably wide, which means manoeuvring it inside the city can be a headache. It's got parking sensors at the front and rear that ensure you don't nick the expensive paintwork, but they too have a hint of lag and get paranoid about a harmless scooter that's easily a good foot away. So, yes, jump into the rear if you intend on using it to get from point A to point B.

Once you’ve climbed up into the rear bench, space will be the least of your concerns. We'd like to believe it's a four-seater thanks to the big transmission tunnel, but you can fit in a fifth occupant if you absolutely had to. It's the ride we aren't too kicked about though. Inside the city, the F-Pace seems a bit of a mixed bag. The ride has that stiff edge one would associate with Euro cars, and it will also rock about if the chauffeur negotiates a pothole carelessly. It does regain its composure quickly, and feels more and more relaxed as the speeds climb.

The F-Pace's trump card is its desirability. Yes, it has its share of flaws, including lack of kit and the commuter-spec engine. But the upsides include the sense of occasion and the wow factor that (oddly) only Jaguar knows how to serve up. If you've got your heart set on the F-Pace and the 3.0 seems out of reach, the 20d does give you a convincing bargain. But if you're simply looking for a convincing alternative, the Range Rover Sport might just fit the bill better.