Updated Bajaj Chetak Spotted Testing, Might Have An Orange Connect 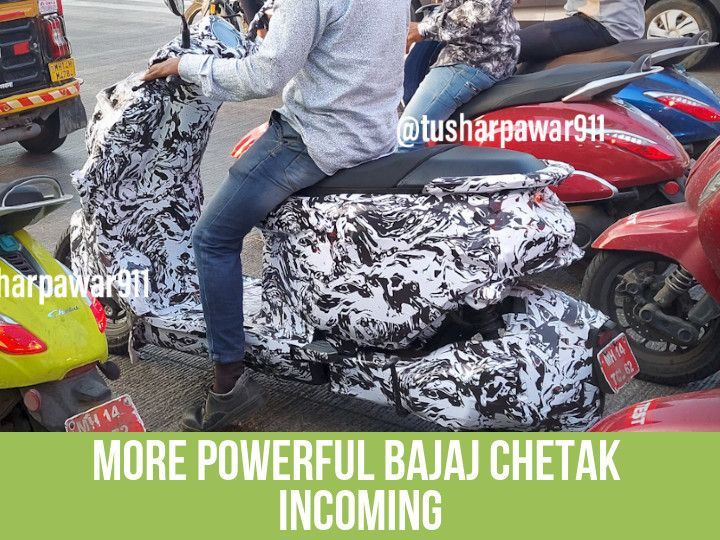 A new and updated Bajaj Chetak has been spotted testing on public roads for the first time. And considering the Chetak electric scooter hasn’t really raked in good sales in recent times, it only makes sense for Bajaj to work on an update.

The test mule of the new Chetak was spotted alongside a fleet of current-gen Chetaks. The new Chetak’s design, though wrapped in camo, seems different from the current-gen model. The proportions, including the front apron, wheelbase, bodywork, and floorboard, appear much bigger than before.

The highlight for us, though, is the revised tail featuring a new grab rail, split seat, and a large tyre hugger housing the number plate -- all of which look more premium than before.

Look closely at the rear, and you’ll notice the hub-mounted motor is seemingly bigger than the existing Chetak too. And bigger usually means more power and consequently better performance, which is something the current-gen Chetak falls short of, especially when compared to the Ola S1 or the Ather 450X.

If the new Chetak indeed turns out more powerful, we believe it could also serve as a blueprint for KTM’s upcoming electric scooter. Even Stefan Pierer, KTM CEO, has in the past hinted that KTM’s e-scooter might be based on the Chetak’s platform, considering the two companies are already locked in a JV.

Meanwhile, not a lot seems to have changed on the features front. The test mule here gets a similar circular LCD instrument cluster, which we feel is slightly long-in-the-tooth now, especially in these TFT times.

The scooter seems to be in its early testing stages, and we expect an official launch by late 2022. It will certainly command a premium over the current-gen EV, which is priced from Rs 1,42,390 (ex-showroom, after FAME-II reductions).