The Bajaj Avenger Street has been recently spotted at a dealership and the bike is expected to be launched anytime now. Bajaj Auto will depend a lot on the latest Avenger to kick up some sales numbers. We take a look at how it stacks up against the reining street bike – the Royal Enfield Classic 350 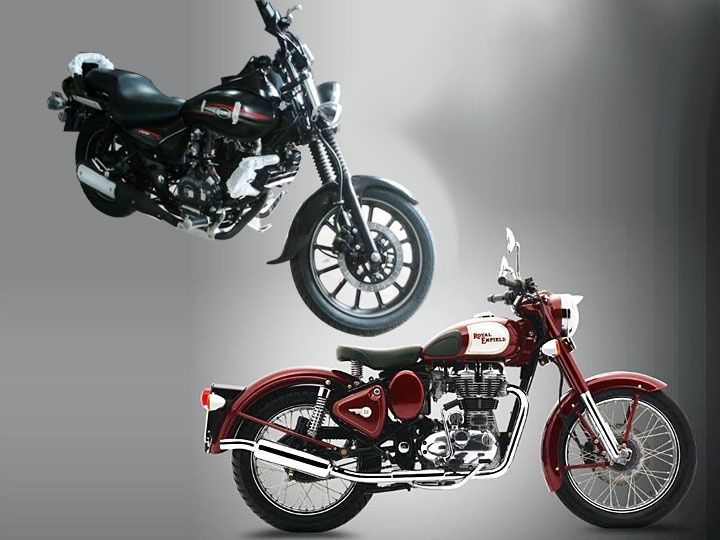 The latest in the Bajaj Avenger series – the Avenger Street – is likely to be launched anytime in the market, with the bike already reaching some dealerships.

For cruiser lovers, the Bajaj Avenger has always been a bike of choice. The Avenger’s chrome-filled cruiser looks, reliability, relatively low maintenance and very good service network made it a hot favourite of long distance tourers. The Avenger though, is long overdue for a facelift – and so, in comes the new Avenger Street, the latest incarnation of the Bajaj Avenger.

The Indian motorcycle market has always been split down the middle by cruiser lovers and sportbike aficionados. If it’s not a cruiser with tall, wide handlebar and relaxed riding position, it has to be a sporty number, preferably with a bikini fairing at the least, if not a full fairing. There is however, another genre of bikes, the street bike – at least the one which is not sporty and can only be termed as a modern classic which still sells in large numbers.

And in this segment, no other motorcycle comes close to the market position, image and presence of the Royal Enfield Classic 350 –the largest selling motorcycle from Royal Enfield.

So, how does the new Bajaj Avenger Street stack up head to head against the Royal Enfield Classic 350? After all, if Bajaj hopes to notch up some sales numbers, the Avenger Street will have to take the Classic 350 head on. What will buyers choose? And what are the strengths and weaknesses really? We bring you a comparison, at least on paper, for now.

The Royal Enfield Classic 350 has timeless design. Apart from minor updates in the graphics or the taillight and fuel filler caps, there has been no major upgrade on the basic design of the bike ever since Royale Enfield started selling these bikes over half a century ago.

More than the design, Royal Enfields have become synonymous with an image of a sturdy, macho, go anywhere bike. In fact, more than the technical prowess of Royal Enfield motorcycles, it is the brand and image which continue to stack up impressive sales numbers month on month for the company. And in September 2015 alone, Royal Enfield grew by a whopping 59 per cent, most of those numbers raked in by Classic 350 sales.

Add to that, the Bajaj name – great brand, fantastic after sales network and reputation for being frugal and easy on the pocket, the Avenger Street seems to be a winner all the way. But will it dent the Royal Enfield Classic 350’s market? Very difficult to say, and maybe even improbable. The typical Royal Enfield buyer will only want a Royal Enfield, and no matter how pragmatic the arguments sound against the brand, nothing else will do.

So, the Bajaj Avenger Street will certainly offer a very good option for first time buyers, but it will be difficult to dent the image of the Royal Enfield Classic 350 and the fan following it has.

The Royal Enfield Classic 350 is not what you’d call a high-performance bike. It certainly isn’t made for speed and acceleration, and even the company markets its products as leisure motorcycling. These are bikes which have a certain old world charm and are meant to be ridden leisurely, chugging along, admiring the scenery and at a very sedate pace at that.

That doesn’t mean the Royal Enfield doesn’t have decent performance. Yes, the Classic 350 will hit upwards of 110kmph if you’re so inclined, but the nature of the engine is such that it’s never happy doing that. Vibrations creep in anywhere above 85kmph and that pushrod motor certainly doesn’t like being revved at high rpms. Ride quality is fantastic though, even over broken terrain. So, give it a straight line, a few hundred kilometres over tarmac, mountain and sand, the Royal Enfield Classic 350 will happily take you, as long as you don’t start expecting it to behave like a sportbike.

The Bajaj Avenger Street is expected to be powered by the 200cc motor as seen on the Pulsar 200NS. It is the same motor derived from the KTM Duke 200, but retuned for more efficiency. So, while it may not have the spunk of the Duke 200, the Avenger Street’s motor will certainly keep you entertained; whether accelerating on a straight line or covering long distances at high speeds, without much of a protest from the engine.

Then again, the last generation Avenger has been a tool of choice for many tourers – for its reliability, and bulletproof reputation. The Avenger Street also promises to offer the same qualities – performance and reliability. And those are qualities which certainly tip heavy on the Avenger Street’s favour.

The Avenger Street on the other hand, comes with better build quality, although not as good as a Japanese brand. Head to head, overall fit and finish is commendable and the high levels of quality on Bajaj motorcycles do stand out, at least in comparison to a Royal Enfield. Also, Bajaj has a very good after sales and service network, and together with the reputation of frugal and maintenance free machines, the Avenger Street certainly makes a very good for itself.

So, if you are in the market for a new bike and you’ve narrowed your choices to these two, which one should you go for then? This is a question with no easy answer.

If it’s performance, reliability and low maintenance you are looking for, you should look no further than the Bajaj Avenger Street. It will keep you happy, with its low maintenance costs and strong service network.

And if it’s the image of the Royal Enfield that attracts you, then there is really no argument on this one, is it? But keep this in mind, if there are days where you want some performance out of your bike, it’s the Avenger Street that will keep you happy, and those days, you will be left wanting more from the Royal Enfield Classic 350 – it’s after all a leisure motorcycle, for the slow and steady cruise.