The Ducati SuperSport and SuperSport S has just been launched, but how does it stack up against the competition? Let’s find out 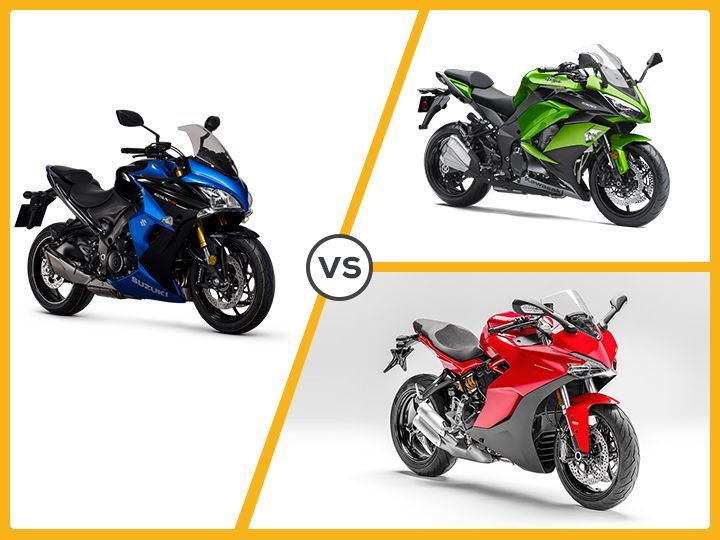 The Italians and the Japanese are the most renowned bike makers. However, they have very different philosophies when it comes to making them. The Italians focus more on the design lines and rider experience, while the Japanese are known for their love for refinement and vehicle reliability. So what happens when these Juggernauts collide with each other on the same platform? With the launch of the Ducati SuperSport and SuperSport S, we can now find out, how it will fare against its Japanese counterparts the Kawasaki Ninja 1000 and the Suzuki-GSX S1000F

The Ducati SuperSport uses the same 937cc, Testastretta L-twin engine found on the Multistrada 950 and Hypermotrad 939. However, the motor on this one makes 113PS of power at 9000rpm and 93 Nm of peak torque at 6500rpm, paired with a 6-speed gear box. The Kawasaki Ninja 1000, on the other hand, uses an inline four-cylinder engine that produces 142PS at 10000 rpm, and 111Nm of torque at 7300rpm, paired to a 6-speed gearbox. The Ninja comes with a host of updates, like the secondary balancer to eliminate excessive vibrations and an updated ECU for more power delivery. However, it is also the heaviest, which puts it at a slight disadvantage. Just like the Kawasaki, Suzuki has also employed an inline four-cylinder engine for the GSX-S1000F. The highly refined motor is taken straight out of the GSX-R1000. It produces 150PS of power at 10000rpm, and 108Nm of torque at a comparatively higher 9500rpm, when combined with a 6-speed gearbox. It’s safe to say that the Suzuki GSX-S1000F is the most powerful bike in this segment

As you expect from a Ducati, it gets loaded with lot of goodies. The SuperSport comes packed with Ride by Wire technology and three riding modes - Sport, Touring and Urban. The most affordable Ducati sports bike is also quite safe with 3-level Bosch ABS and 8 levels of traction control.The Ducati SuperSport S is also the first bike in this segment to offer bi-directional quick shifter.

The Kawasaki Ninja 1000 is no slouch when it comes to technology either. It comes with 3-mode Kawasaki Traction Control (KTRC), 2 power modes - Full and Low -, a slipper clutch and ABS for safety. The Ninja also gets the Kawasaki Cornering Management Function and the Bosch Inertial Measurement Unit (IMU).

The Suzuki is the oldest motorcycle among the trio, but it does come with essential safety features like ABS and 3-mode traction control

The Ducati SuperSport has a wheelbase of 1478 mm and despite a high seat height of 810 mm, it is quite easy to place both your feet on the ground due to a narrow seat profile. Ducati also offers optional saddle that reduces seat height by further 20mm. The bike weighs 210kg (kerb), which makes it the lightest in this comparison. It has a fuel tank capacity of 16 litres and a claimed mileage of 14kmpl. The fuel range on this Ducati is 200km.The Ninja 1000, on the other hand, has a more upright seating position.

Thanks to the three-way adjustable windscreen, the rider can keep the wind blast at bay. The Kawasaki bike, however, has a higher seat height of 820mm, which may turn out to be a constraint for some riders. It has the shortest wheelbase of 1440mm and is the heaviest at 239kg (kerb). It has a 19-litre fuel tank, which should be useful while touring. The Suzuki has the same seat height as the Ducati, but it feels slimmer in the seat with the foot pegs set a bit higher, for a more aggressive riding position. It also has a shorter wheelbase when compared to the Ducati, which is 1460mm and a weight of 214kg (kerb). The Suzuki GSX-S1000F has a 17-litre fuel capacity, and a company claimed mileage of 20kmpl.

The SuperSport uses a tubular steel Trellis frame. Suspension duties are handled by 43mm Marzocchi front forks and adjustable Sachs monoshock at the rear. The SuperSport S variant, however, comes with an upgraded suspension setup which uses Ohlins sourced 48mm fully adjustable USD forks at the front and a monoshock unit at the rear. The bike uses a  dual 320mm semi-floating Brembo front disc and 254mm single disc rear disc.

Kawasaki Ninja has an aluminium twin-tube frame, along with 41mm USD forks and gas charged monoshock unit at the rear. It uses a 300mm semi-floating front petal disc and a single 250mm rear petal disc to control its immense power. The Suzuki GSX-S1000F borrows its chassis from the older GSX-R1000 supersport. It uses 43mm KYB sourced adjustable suspension up front, and single link-type coil at the rear which is adjustable for preload and rebound. As far as braking is concerned, the GSX-S1000F gets Brembo Radial Mount Monobloc Calipers with dual 310mm disc at the front and Nissin single piston callipers at the rear.

The newly launched Ducati SuperSport will cost you around Rs 12.08 lakh, while the S variant costs Rs 13.39 lakh (both ex-showroom, Delhi), which is quite a premium, considering the fact that the Kawasaki Ninja 1000 is priced at Rs 9.98 lakh (ex-showroom, Delhi). Kawasaki has been able to offer the cut throat pricing as the sports tourer is brought to India in SKD (Semi Knocked Down) form. However, it’s not the same case with Suzuki, as the GSX-S1000F is sold as a CBU (Completely Built Unit) in India, and is thus available at Rs 12.70 lakh (ex-showroom, Delhi). The Ducati SuperSport then, is clearly the most expensive of the lot, but is it really worth your hard earned money? Find out in our review of the Ducati SuperSport.