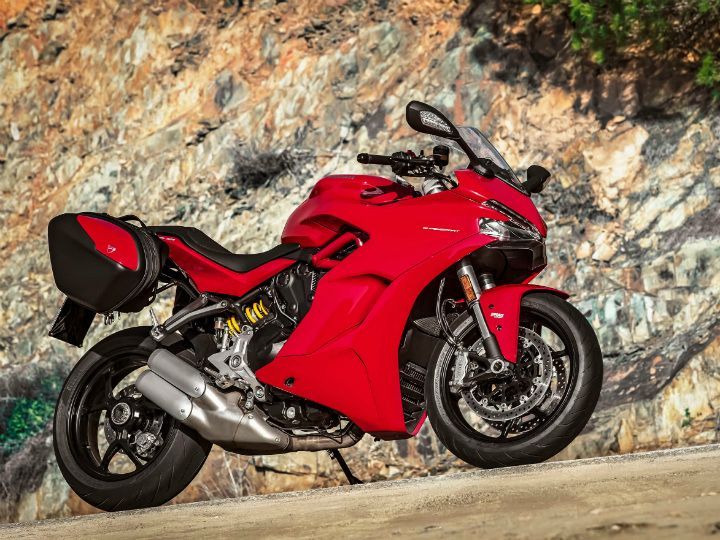 Ducati India will launch the new SuperSport in our two-wheeler market tomorrow. The new motorcycle is available in two variants - standard and SuperSport S - in international markets and it is likely that both variants will be launched in India as well. Ducati dealers across India had started accepting bookings for the motorcycle since August for a token amount of Rs 1-2 lakh (varies from state to state). The base version is expected to be priced at around Rs 12 lakh, while the SuperSport S might retail for around Rs 14 lakh (both prices are ex-showroom). The new Ducati SuperSport will be the latest addition to the Italian bike manufacturer’s sports bike range after the Ducati 959 Panigale.

In terms of its looks, Ducati has taken inspiration from the 959 Panigale while designing the SuperSport. The new motorcycle features a redesigned headlight with LED DRLs, a larger saddle, and smaller exhaust muffler to set it apart from the 959 Panigale. While Ducati sports bike offerings are usually track-focussed in their approach and have an aggressive riding stance, the Ducati SuperSport is more suited for the twisty mountain road than the racetrack. For this purpose, it has a relaxed and comfortable riding posture as opposed to the Panigale’s aggressive riding position.

Underneath the sculpted bodywork resides a 937cc, L-Twin Testastretta engine that debuted on the Ducati Hypermotard. The liquid-cooled motor delivers 110PS at 9500rpm, while 93Nm of peak torque is made available at 6500rpm. In comparison, the Ducati 959 Panigale’s motor produces 157PS and a higher torque of 107.4Nm.

The new Ducati SuperSport is loaded with goodies such as ride-by-wire, power modes, 3-level Bosch ABS unit and an 8-level traction control system. The SuperSport S, on the other hand, gets fully adjustable Ohlins suspension unit, a rear cowl and bi-directional quickshifter (optional on the stock variant). When launched, the Ducati SuperSport will compete against the Kawasaki Ninja 1000 and the Suzuki GSX-S1000F in the Indian two-wheeler market.