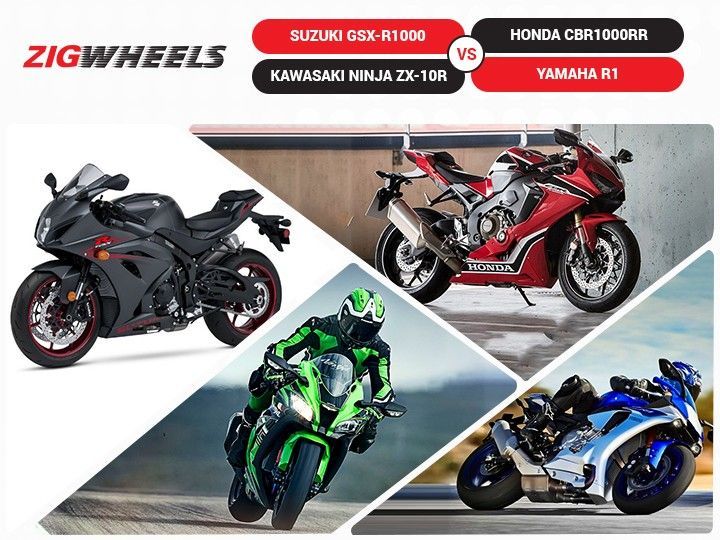 All the bikes listed here are road monsters but the true potential of the bikes can be best enjoyed in a controlled environment. These are the affordable and more street-friendly versions and they also have proper race- spec options available for anyone aiming to go ballistic on the track.

The Suzuki GSX-R1000 is the newest entrant to this club while the Honda CBR1000RR Fireblade was also launched some time back. All the motorcycles come equipped with hardcore electronics on offer and are engineered to make riders experience the ultimate adrenaline rush. We find out which is the best motorcycle you can put your money on in this quad.

The Suzuki GSX-R1000 gets a Suzuki Dual Throttle Valve (SDTV) system which has two butterfly valves in each throttle body barrel. The primary valve is controlled by the rider while the secondary valve is controlled by the ECM. The ECM enhances combustion efficiency, makes throttle response linear and improves low-end and mid-range torque. The bike gets Suzuki Drive Mode Selector (S-DMS) which allows the rider to select the rider from three fuel-injection and ignition-system maps and an electronically controlled steering damper which uses the ECM to monitor motorcycle speed and adjusts itself for lighter steering at slower speeds while delivering more damping force at highway speeds.

The Honda CBR1000RR Fireblade features a 5-axis Inertial Measurement Unit (IMU) that manages the ABS system, 9-level Honda Selectable Torque Control traction control (HSTC), Honda Electronic Steering Damper (HESD), Throttle By Wire (TBW), Rear Lift Control (RLC) and Wheelie Control. The bike offers three riding modes (Street, Circuit and Mechanic), five levels of power delivery and three levels of engine braking control. As you might’ve figured out, Honda made sure that even if they were late to join the electronic wizardry party, they made a banging entry. Moreover, the all-LED treatment to the headlight makes it looks cool.

As the spec sheets goes, the Kawasaki is the most feature- loaded motorcycle while the other three are not lagging much behind in the race.

The Suzuki GSX-R1000 gets a twin-spar frame which is welded on five cast aluminium-alloy sections. It also gets an all aluminium swingarm which is also welded using just three castings. The bike gets 43mm inverted Showa Big Piston forks at the front and link-type monoshock unit with adjustable rebound damping with spring preload at the rear. Braking duties are handled by twin 310mm disc rotors with radially mounted Brembo monobloc calipers at the front and 220mm rear disc rotor with Brembo calipers at the rear. ABS is offered as standard.  The motorcycle is shod with Bridgestone 120/70 Z R17 tubeless tyre at the front and 190/50 Z R17 tubeless tyre at the rear. Seat height is 810mm, ground clearance is 130mm, kerb weight is 203 kg and the fuel tank capacity is 17.5litres.

The Kawasaki Ninja ZX-10R gets a lightweight twin-spar cast aluminium chassis. The bike gets 43mm inverted Showa forks with external compression and rebound damping chamber at the front and a horizontal back-link monoshock with BFRC-L lite gas-charged shock and compression and rebound damping at the rear. Braking duties are handled by twin 330mm disc rotors with dual radially mounted monobloc 4-piston calipers at the front and a single 220mm semi-floating petal type disc rotor with single bore aluminium piston caliper at the rear. ABS is offered as standard. The bike gets Bridgestone 120/70 Z R17 tubeless tyre at the front and 190/55 Z R17 tubeless tyre at the rear. Seat height is quite high at 835mm, ground clearance is good for a superbike at 145mm, kerb weight is 204 kg and it gets a fuel tank capacity of 17 litres.

The Honda CBR1000RR Fireblade gets a diamond-type , aluminium composite twin-spar frame. The bike gets 43mm Ohlins inverted Big Piston forks with 120mm travel at the front and a monoshock unit with HMAS damper with 10-step preload stepless compression and rebound damping with 138.2mm travel at the rear. Braking duties are done by twin 320mm discs rotors with Brembo monobloc calipers at the front and a single 220mm disc rotor with Brembo calipers at the rear. ABS is offered as standard. The bike is shod with Bridgestone 120/70 Z R17 tubeless tyres at the front and 190/50 Z R17 tubeless tyres at the rear. Seat height is high at 832mm, ground clearance is 130mm, kerb weight is 196kg and gets a fuel tank capacity of 16 litres.

The Suzuki GSX-R1000 is priced at Rs 19 lakh. The Honda CBR1000RR is priced at Rs 17.61 lakh. The Kawasaki Ninja ZX-10R at Rs 16.4 lakh is the cheapest motorcycle of the lot. The Yamaha R1 is the most expensive motorcycle of the lot, priced at Rs 24.74 lakh (all ex-showroom, Delhi)- it is almost Rs 6 lakh more expensive than its nearest rival. Nearly all the motorcycles offer more or less the same electronics; all of them are Japanese so there are no issues with the reliability factor, and all of them have been updated in the recent past. The ZX-10R was launched in 2016 in the country and it is more or less a new motorcycle even now. With the pricing and features that it offer, it’s simply an irresistible deal to shell out your cash for. The green goblin, in my view, is the most bang for your buck in this segment.