Team Blue brought an armada of vehicles at the 2019 Tokyo Motor Show. Sadly, none of those are performance thoroughbreds that we’ve come to expect from the triple tuning forks 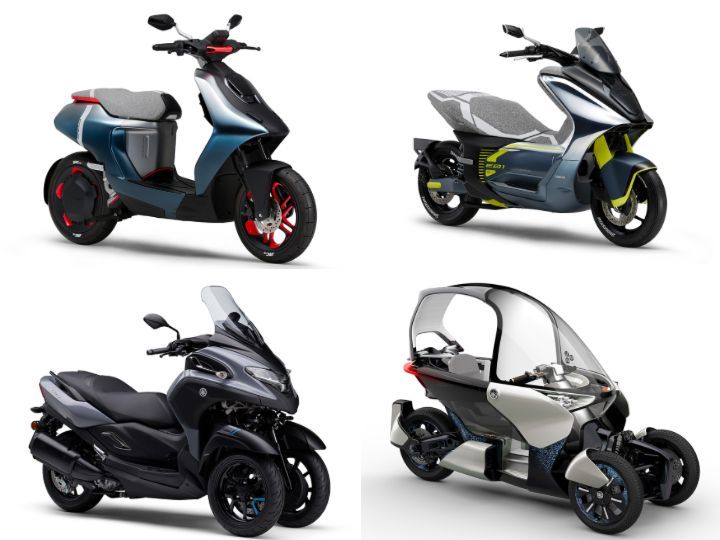 If bike makers were awarded brownie points for the size of their stalls, Yamaha would be right at the top. The Japanese manufacturer went completely berserk with the number of products it unveiled. Besides a few concepts, motorcycles such as the all-new R1 and the Ténéré 700 made their Tokyo debut as well. If you love machines, then Yamaha’s booth was the place to be. It had everything from electric scooters and three-wheeled scooters to a trials bike and even a drone! But unlike Kawasaki, who unveiled two brand-new motorcycles, Yamaha didn’t reveal anything new, which is a bit of a bummer!

There is a silver lining though. The concepts that Yamaha showcased will hit the production line soon. So what is Team Blue planning for the next few years? Take a look below:

Apart from unveiling a three-wheeled scooter, the Japanese bike maker also showcased the all-electric maxi-scooter, the E01. As of now, Yamaha hasn’t revealed a whole lot of details except that the E01’s performance will be similar to that of conventional 125cc scooters. Expect the production version to look almost like this model. As electric scooters go, it comes equipped with all the latest technologies from ABS, Bluetooth connectivity and a digital instrument cluster to smartphone compatibility. But most importantly, it will get a swappable battery setup. Now, swappable battery isn’t a new thing for Yamaha. We’ve already seen the Japanese manufacturer using this feature in the EC-05, which is on sale in Taiwan.

While Kawasaki was busy with its mad 1000cc naked monster, Yamaha unveiled a small electric scooter called the E02 to take on the conventional 50cc scooters. It’s the same drill here just like the E01: no specs, no information about the battery or the charging time. However, we do know that it could make it into production soon. We expect that Yamaha might launch it first in Taiwan, where it has already set up several battery swapping stations, making it convenient for the masses.

Remember the Yamaha Niken? Of course, you do. Who wouldn’t remember a three-wheeled motorcycle? But the Niken isn’t the only unusual vehicle in Yamaha’s portfolio. The Japanese bike maker has now applied the same formula to its scooters as well. It already has a 125cc three-wheeled scooter, but at the 2019 Tokyo Motor Show, the manufacturer took the wraps off the 2020 Tricity—a three-wheeled 300cc maxi-scooter.

The Tricity is based on the 3CT concept, which was showcased at the 2018 EICMA. We often see manufacturers changing the design of the production-spec models significantly, but not Yamaha. Apart from minor tweaks on the front and on some side panels, the 2020 model looks quite similar to the concept version.

As of now, there’s limited information on the scooter, however, we will get our hands on the official spec sheet at the 2019 EICMA. It is highly likely that the Tricity will share a lot of features from the XMax, a 300cc maxi-scooter that Yamaha is selling abroad. So expect the Tricity to come equipped with traction control, ABS, a smart key, all-around LED Lighting system, and adjustable handlebar and windscreen.

As far as its India launch is concerned, we don’t think that’s happening any time soon as a 300cc three-wheeled maxi-scooter will cost a bomb, making it difficult for Yamaha to find a clientele.

Was the Tricity the only three-wheeler at Yamaha’s booth? No, sir. The Japanese took the very same concept and applied it to another scooter, but this time, it has a roof on it! Enter the MW-Vision. This is just a concept version and Yamaha hasn’t revealed the specs (obviously). The only thing we can figure out from the images is that it’s a three-wheeled scooter with a roof and a comfortable riding position because while leaning to such degrees, you might want to prioritise your comfort.

Being a concept vehicle, expect it to have all the bells and whistles such as a digital instrument cluster, LED lights, AI-tech and more. However, its most interesting feature is the ‘attitude control technology.’ There’s no word on how it works, but we assume there are a bunch of sensors that monitor the rider’s face and change the riding dynamics of the vehicle accordingly.

Amid exciting bikes such as the ZX-25R, electric vehicles, and some gorgeous Lexus concept cars, Yamaha brought a bicycle. Well, an all-electric off-road electric to be precise. And Yamaha isn’t the only major manufacturer to dip its toes in this segment, Harley-Davidson is also planning to enter this space with its electric bicycle.