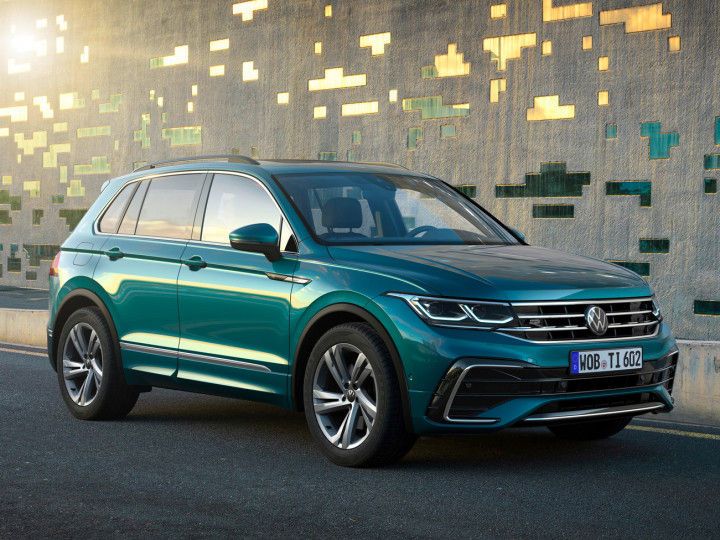 The Volkswagen Tiguan is an SUV for those who like their cars to be subtle yet premium. However, the facelifted model with its cosmetic updates seems to change that perception. It also comes loaded with bucket loads of technology and for the enthusiast, there’s a new Tiguan R variant as well.

Most of the Tiguan’s design updates are at the front, including a sleeker grille and redesigned LED headlamps which take inspiration from the Mk8 Golf. The bumpers are also new and feature aggressive intakes, giving the SUV more road presence. Apart from the new alloy wheels, revised LED tail lamps and the placement of the “TIGUAN” badging, the design of the SUV looks similar to the pre-facelift model. Overall, the updates have given the Tiguan a fresh lease of life and we expect these changes to be implemented on the larger Tiguan Allspace that’s sold in India soon.

There’s also a thoroughbred Tiguan R variant with aggressive design elements, larger 21-inch alloy wheels and quad exhaust outlets. Inside, the Tiguan R comes with sports seats with extra side bolstering to hug you while attacking corners as well as an R-specific steering wheel.

Hop inside the Tiguan and your eyes will be drawn to the new steering wheel which features touch-based controls.  Shift your focus to the centre console and you’ll notice touch-based climate controls and a larger infotainment system featuring Volkwagen’s latest MIB3 operating system and connected car technology.

In terms of engine options, the Tiguan facelift will initially be offered with a cleaner 150PS 2.0-litre TDI diesel engine that drives all four wheels. There’s also a cleaner plug-in hybrid variant which will be capable of covering 50km on pure electric power. VW is yet to reveal the Tiguan R’s specifications, though. However, VW has stated that it’ll feature a torque vectoring system to help it distribute power evenly between both axles as well as individual wheels.

The India-spec Tiguan won’t employ any of the engine options mentioned above. It will most likely be offered with the 150PS 1.5-litre TSI petrol engine as Skoda Auto Volkswagen India has decided to take the petrol-only route in the BS6 era.

The refreshed India-spec Volkswagen Tiguan is expected to be launched in 5-seater form early next year while the Allspace variant with similar upgrades will follow later. Expect prices to start from Rs 25 lakh (ex-showroom), putting it in the ballpark of the Skoda Karoq, Hyundai Tucson and the upcoming Citroen C5 Aircross.