Conquering The Himalayas With The TVS Zest Girls

We accompany a gang of girls to the mecca of all adventure tourers, Khardung La, aboard the 110cc TVS Zest. Who needs specialised touring machines anyway? 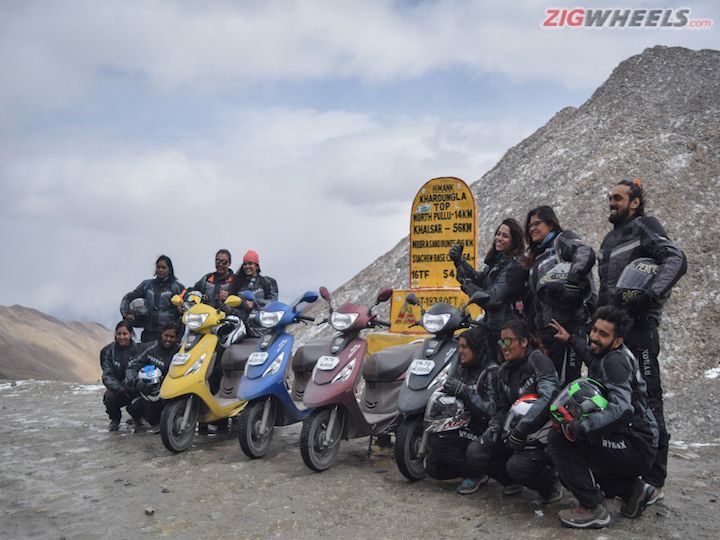 Riding across the Sahara, watching MotoGP live, visiting the Isle of Man… of all the things that bikers pin on their bucket lists, conquering the mighty Himalayas is right there at the top, for most. For centuries, this fabled mountain range has captured the feverish imaginations of adventurers everywhere.

And with the advent of motorcycling, it was inevitable that man – and woman – would try to go there on motorised contraptions too.

Unfortunately, we aren’t all Tenzing Norgay or Edmund Hillary, and bikes, even hardy purpose-built dual-purpose ones, aren’t capable of accomplishing what the human body alone can. Which is why, when it comes to the Himalayas, Khardung La is still the best we can aspire to, not the summit of Mount Everest.

Located at an altitude of approximately 18,000 feet above sea level, Khardung La is what Indian biking dreams are made of. Its claim to fame as the world’s highest mountain pass is such that people happily ignore that the Mana Pass is higher still.

Every year, hordes of bikers descend upon Leh, the nearest major town, to conquer this pass and the other challenges that the starkly beautiful Ladakh region has to offer. And almost, almost all of them ride one kind of Royal Enfield or the other, either from one of the numerous rentals in Leh or Himachal Pradesh, or shipped all the way from home, wherever that is.

The Himalayas is Royal Enfield’s stomping grounds. It rules everything around here.

Today it's the turn of the petite scooterette!  Not one, but twelve TVS Scooty Zests, and busting the stereotype properly are the ten ladies and two guys to steer them. No racers these! In reality TV fashion the 2017 edition of Himalayan Highs found these adventurers through a nationwide contest.

In the first edition of Himalayan Highs, TVS scaled the challenge with a solo rider, Anam Hashim, setting a Limca Record in the process. Next year, a girls-only group found its way into the India Book of Records again, this time for being “the first group of women to scale Khardung La on an 110cc scooter.”

But in the course of selecting the finalists for the second season, the TVS personnel noticed an interesting trend: Despite them making it clear that the ride was open only to women, there were a fair share of men who put their name forward anyway, wanting in on the action.

And so, for season 3 this year, TVS decided to assuage its male fans and basically said: “Come one, come all, and bring your friends along.”

When the dust of the rigorous selection process settled, there remained standing the final twelve, the ones who would be undertaking the TVS Zest 110 Himalayan Highs Season 3. Ten women and two men, from four regions of the subcontinent, ten states of India, all walks of life, and with wildly varying degrees of biking experience.

These twelve intrepid souls would start their ride from Mandi in Himachal Pradesh. Along their 750-odd km route to Khardung La, they would encounter some of the most beautiful and yet inhospitable terrains nature has to offer. Mountain passes, lunar landscapes, snowy deserts, and plain old crumbling roads would all work in unison to make their going as tough as possible. Not only would their riding skills be tested to the hilt, their team spirit, leadership skills, empathy and acumen would all be questioned.

And so will be the TVS Zest 110, their seemingly incongruous tool for this job. With their colours chosen by the women mostly to accessorise their own hair and nail styling (TVS’ words, not ours), these 110cc machines with 8PS of power and 8.4Nm of torque were built to take on city commutes, not these mountain ranges that even claims scores of hardened soldiers’ lives every year. But TVS has grown so confident of the Zest’s abilities over the last three seasons that they have chosen to simply mount the air intake and exhaust higher, to keep it out of harm’s way in those inevitable water crossings. Knobby tyres and a mesh cover for the CVT transmission, to protect it from rocks and pebbles, are the only other changes, and that’s about it.

We met up with the Season 3 riders in Leh a day prior to our combined assault on Khardung La. Despite having faced unprecedented hardships non-stop for the past week, the team was as euphoric as if they’d just won the World Cup. From a 19-year old girl who’d just entered college, to a 32-year old divorced mother who had just quit her cushy job to follow her passion, from a national-level autocross racer to a girl who hadn’t ridden even a moped before – everyone had gone through different stages of purgatory and came out with interesting stories to tell. Living with each other in such close quarters, they’ve formed bonds of friendship not just with each other, but with their respective steeds as well. And, despite having endured a multitude of problems on the road, and knowing what was to come, everyone was eager to see through the last leg of the trip.

This evening was also the only day of rest for the Himalayan Highs team, who had been riding constantly for over two weeks now. Late in the afternoon, we accompanied the team to Chowkhang Monastery, where they had a rare moment of levity teaching the Buddhist monks how to ride the Zest. In a generous display of largesse, the TVS team also gifted the monastery two brand new Zests, a charitable gesture that drew rounds of applause from everyone who witnessed it.

D-Day dawned with clear and sunny skies with just a smattering of rain-bearing clouds, promising good things for the 40-odd km ride to Khardung La and back. Half of the route up the pass is well paved thanks to the untiring efforts of the Border Roads Organisation (BRO); the other half is just gravel and rocks. Snaking and weaving their way through the mountains, they’re bounded by the steep rising walls of the Himalayas on one side and vertigo-inducing gorges on the other. Certainly not for the faint of heart.

And yet the women, the two men, and the journalists rode on, spurred by that same sense of adventure that has goaded explorers through these passes and glaciers since the ages. The air kept getting thinner, it got colder, and the view ahead started getting clearer and clearer until it was shining with such a searing intensity that even the most battle-hardened among us had to bring out our sunglasses.

Because of the extremely thin air at the top, we had planned to stay there for just 30 minutes before making a swift descent. But as plans like these are generally wont to, it all went haywire once we reached Khardung La. The wheezing and the dripping noses momentarily smothered by piping hot tea and Maggi noodles, we proceeded to take a few celebratory photos before putting back on our riding gear.

On the way down, I grabbed the keys of a violet-ish coloured Zest 110. The scooter purred to life instantly, even in that freezing altitude, and I was off, making a headstart over the Himalayan Highs participants so that I could take some photos of them riding past.

It is said that riding is a lonely affair and one that gives way for much introspection, and it is nowhere as true as when you’re riding at a place like the Himalayas. Barely a kilometre after leaving the din of Khardung La behind, and save for the odd SUV going in the opposite direction, I found myself riding alone in the lifeless folds of this mountain range. The sheer scale of the universe and the vulnerability of our own existence - infinitesimally small when compared to the bigger scheme of things - really hits you home like a sledgehammer.

Carl Sagan once said that astronomy is a humbling subject to learn, that studying it really makes you appreciate the universe around us, and goads us to be kinder to one another, seeing as how we are so alone - a small speck in a vast cosmic universe. For those of us who haven't been lucky enough to learn the subject, taking a ride through some desolate and beautiful roads like these would probably be a close life-affirming experience.

Ah yes, the Zest 110. Like those hardy BRO constructors who made these places accessible to us, she soldiered on with nary a whimper of protest. Its short-travel telescopic front suspension and 10-inch dual-purpose tyres managed to take the battering from the gravel road in its stride. Sure, there were a few occasions when the clutchless CVT engine sputtered to a halt on the downhill stretch, but it was understandable. The rear also had a tendency to lock up on hard braking, but I must confess, it was actually more fun than scary here.

What is all the more impressive is the way these tiny, barely modified commuting machines went about the bends, showing a clean pair of heels to the lumbering hulks of metal that commonly stomp these roads. Agile, svelte, and bedecked in the daintiest of colours, these scooters took everyone by surprise (and a little amusement) as they zoomed past, breaking mechanical and human prejudices.

The other part of the equation -- the women and men who took the Zest 110 to the top -- were no less stellar. They left us media persons and even TVS’ own support crew dumbfounded with their dogged determination, team spirit, and ability to pick up new skills. Almost all of them had turned into fast, safe and brave riders in the course of the last two weeks, and the final sprint down to the town of Leh was their graduation party.

The craggy monotone landscape was their canvas and they really painted it in the vibrant colours of the Zest.