Tata Motors Is Bringing All These Cars To India In 2020: Nexon EV, Buzzard SUV, Altroz, Nexon and Tiago Facelifts 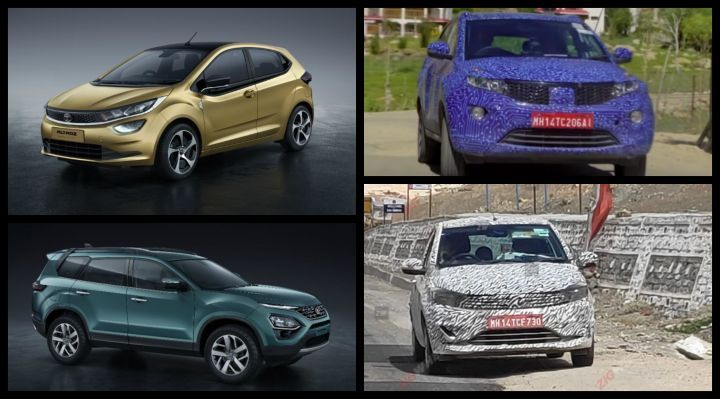 We know from all the test mules spotted across India that Tata Motors has a bunch of new launches up its sleeve for 2020. The most recent of the spy shots was the Altroz hatchback, which is likely to be the first vehicle to be launched next year. In the face of an industry-wide slowdown and mounting research and development costs, including BS6 upgrades for its own vehicles, Tata’s recent commitment to retaining the Jaguar and Land Rover (JLR) brand is a positive sentiment. The Indian carmaker has a slew of combustion and electric vehicles (EVs) lined up for launch next year, including two SUVs, two hatchbacks, and at least one EV. We hope to see them all at the Auto Expo 2020.

The last time we saw the Altroz, it was undisguised and in the bed of a transport truck in Minsk, Belarus. The hatchback, which sits in a segment above the Tiago, will compete with the Maruti Suzuki Baleno, Honda Jazz, and the Hyundai i20 when launched. It is likely to get two petrol and one diesel engine, along with features like automatic climate control, cruise control, and ambient lighting. The Altroz was slated for a September unveil, but the company has pushed the dates back. We might see the Altroz before the Auto Expo 2020, where we expect the car to be launched. Expect prices to be competitive in the segment, and may range from Rs 5.5 lakh to Rs 8.5 lakh.

The Tata Nexon electric vehicle (EV) was recently featured in Tata’s #TheUltimateElectricDrive ad campaign. It is being tested by celebrities Milind Soman and Ankita Konwar, who have been driving it across some of the harshest terrain in the country - the drive from Leh to Manali. The Nexon EV will be the first Tata to feature the Ziptron powertrain and will come with minor changes like the semi-digital instrument cluster. Tata claims that the electric SUV will have a range of 300km, which will likely drive up prices. Expect to pay Rs 15 lakh to Rs 17 lakh for the EV. When launched, the Tata compact SUV will go head-to-head with the upcoming Mahindra XUV300 Electric.

The facelifted Tata Nexon compact SUV was spied earlier this month. We now know that the facelifted compact SUV will have a new front fascia, with larger headlamps and a wider grille. The rear appears to be unchanged from before. We expect to see the new Nexon at Auto Expo 2020. Tata may launch this SUV soon after the Expo. It is likely to be priced higher than the current model, which starts from Rs 6.58 lakh ex-showroom.

Tata debuted the Buzzard at the Geneva Motor Show, and even though the carmaker has been tight-lipped about the car and its launch, it has been spied testing on Indian roads on multiple occasions. The Buzzard is really a 7-seater iteration of the Harrier SUV. To accommodate the third row, Tata has had to raise the roof by a few centimetres. The Buzzard also features a longer overhang. We expect to see this one at Auto Expo 2020, and it is likely to launch soon after. The new Buzzard will come with a BS6-compliant 2.0-litre diesel engine. With the 7 seats, the Buzzard will compete with the likes of the XUV500 and the upcoming 7-seater MG Hector.

Members of our team have caught the Tata Tiago facelift undergoing testing in Leh. Without the Nano, the upcoming Tiago hatchback will be Tata’s entry-level offering. The Tigor compact sedan, which shares its front-end with the Tiago, will also get a facelift. Exterior changes include a revised front fascia, with different headlamps and a more conventional slatted grille. Revised bumpers include air vents in the front, as well as a redesigned vent at the bottom. Inside, we expect the Tiago and Tigor to come with a semi-digital instrument cluster, with the possibility of cruise control being offered as an option or on higher trim levels. Likely to be unveiled at the Expo, the Tiago is sure to be priced at a slight premium over the current model, which costs between Rs 4.40 lakh to Rs 6.37 lakh, ex-showroom Delhi. Similarly, the Tigor is likely to be priced higher than the Rs 5.50 lakh to Rs 7.90 lakh current model.