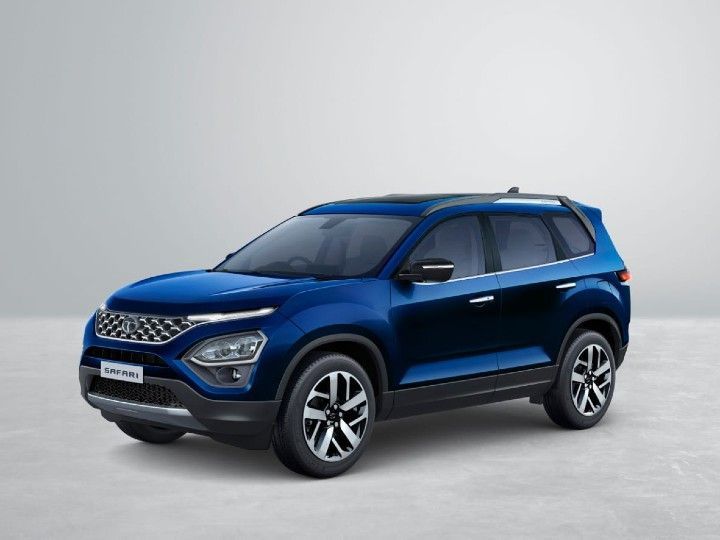 Tata Motors is all set to debut the new Safari in the country. Yes, the successor to the iconic Safari badge is a Harrier-based three-row monocoque SUV, but it will have some distinctive bits to make it stand out. Here’s all you need to know about the new Safari ahead of its debut on January 26:

The first major change to the Harrier is in the form of a stepped roof and an upright tailgate to accommodate the third row. For reference, the Gravitas concept is 63mm longer and 80mm taller than the Harrier. It also gets a new tri-arrow front grille finished in chrome, larger 18-inch wheels, swanky roof rails, and a new blue dark body shade. This colour will be offered alongside the expected Harrier shades of Camo Green, Telesto Grey, Calypso Red, Orcus White and Atlas Black.

Tata Motors teased a tiny snippet of the cabin which confirms captain seats in the second row that would make it a 6-seater setup. Also expect a 7-seater layout with bench seats. The teased images also hint at a new lighter black-creme colour scheme, which gives it an airier vibe. While it will most likely retain the majority of its features from the Harrier, it could add an electronic parking brake, connected car tech, and a powered tailgate.

Yes, the Safari will currently utilise the Harrier’s front-wheel-drive 170PS/350Nm 2.0-litre diesel engine with either a 6-speed manual or a 6-speed torque converter transmission option. But Tata Motors has confirmed the SUV is capable of accommodating an all-wheel drivetrain, albeit depending on demand. That being said, the official exterior shots have confirmed an added boost in the Safari’s braking prowess with the addition of rear disc brakes. This isn’t offered in the Harrier and instead utilises a rear drum brake setup.

The wait for the Tata Safari is almost over. It is likely to go on sale around early-February. Unofficial pre-launch bookings are already underway for a token amount of Rs 51,000. Prices could start from Rs 15 lakh (ex-showroom).

The Tata Safari will take on the likes of the MG Hector Plus and the upcoming 2021 Mahindra XUV500 in the country.