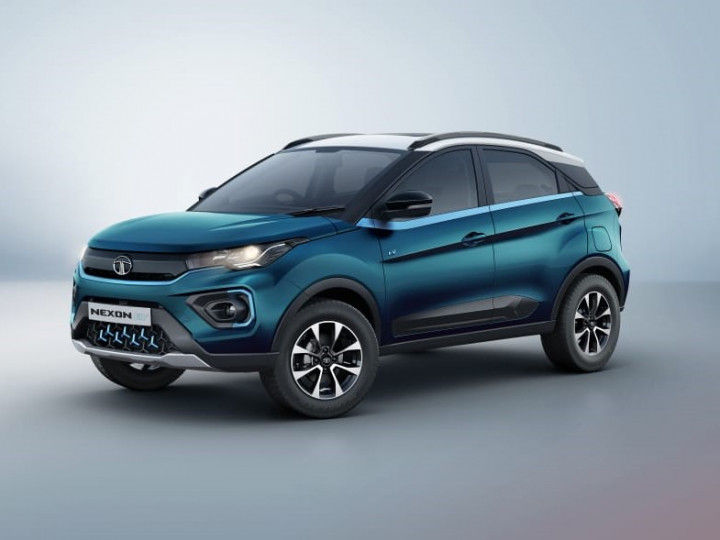 Tata Motors is in the news for the second time this month. First it was the much-anticipated Altroz but what we have here is Tata’s foray into long-range electric vehicles, the Nexon EV. The all-electric sub-4 metre SUV is claimed to offer an impressive driving range of more than 300km. We know everything about the electric SUV except for its price, and you can too, right here. The Nexon EV is also the first all-electric sub-4 metre and is destined for a launch sometime in early 2020. Meanwhile, here are 15 images of the SUV for a closer look.

The Nexon EV debuts updated styling which will also be offered in the facelifted Nexon in the coming days. Overall, the dimensions remain the same with cosmetic changes focused on the front and rear ends.

Gone is the rounded design language of the Nexon and in comes sharper lines complete with new headlamps, grille, and lower bumper. The twin barrel headlamps are slimmer than the ones on the standard Nexon and a closer look will also reveal electric blue accents signifying its green intentions.

The same blue accents have been carried over to the rear end, which also gains a new bumper design.

The lower window area features an electric blue strip that extends to the rear end. Apart from this, the new alloy wheel design is the only change to the side profile. Keen eyes will be able to notice the sunroof and the shark fin antenna.

The Nexon EV’s 30.2kWh IP67 rated battery pack can support fast charging that enables the SUV to charge to 80 per cent in an hour. It can also be charged via a 15A plug point. With a wall-mounted home charger, the Nexon EV takes 8 hours to juice up.

The electric blue accents are tastefully carried on to the cabin as well. The semi-digital instrument cluster, flat-bottom steering wheel, and the 7-inch infotainment system are lifted straight off the Altroz.

A huge cubby hole is present where the standard Nexon’s gear lever usually sits. The drive options - R,N,D, and S - are controlled through a rotary knob.

The instrument cluster features a fully digital section for the MID and other details like the battery condition, regen energy, power used and drive modes. To the right is an analogue speedometer that looks out of place with its bland design.

Here’s the cooled glovebox in action along with the controls for automatic AC and other features. Some of the notable features in the Nexon EV are ConnectNext connected car technology with 30 connected features, cruise control, Harman sound system, and keyless entry.

Tata has informed that the interior space and the ergonomics remain the same as the standard Nexon. Even though the battery is placed under the floorboard, the floor height also remains the same.

One of the reasons why the Nexon was chosen for electrification is its safety. The SUV was the first Indian car to score 5 stars in the Euro NCAP crash test. Tata claims the safety offered is on par with the standard Nexon despite the added weight.

A closer look at the flat-bottom steering reveals black inserts instead of the silver ones in the Altroz.

The boot space remains identical to the standard Nexon at 350 litres.

Tata Motors is likely to launch the Nexon EV at the Auto Expo 2020. As of now, the Nexon EV belongs to a niche category as the other eSUVs like the Hyundai Kona Electric and MG ZS EV belong to a higher price bracket. Tata will be offering the Nexon EV in three variants: XM, XZ+ and XZ+ LUX. Expect a price tag hovering between Rs 15 lakh and Rs 17 lakh (ex-showroom) for these variants.