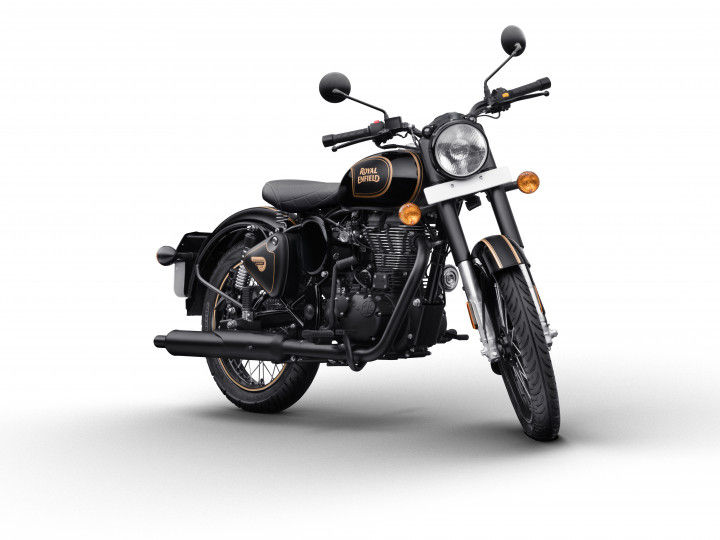 The Royal Enfield Classic 500 has been around for over a decade, and we’ve seen many guises over the years. Now, as its time draws to a close thanks to BS6 emission norms, Royal Enfield has decided to give it a special send-off in the form of a new, limited-edition colour scheme. Fittingly called Tribute Black, the limited edition colour option features gloss black body panels, with matte black inserts on the tank and battery box.

Of course, it wouldn’t be complete without pinstripes, so RE has thrown in some gold ones, which go very well with the gold rim tape and provide some contrast to the design. You can never go wrong with a black and gold colour combo, so if you’d like to pick up a Tribute Black Classic 500 for yourself, get onto the manufacturer’s website on February 10 between 2pm and 5pm. The motorcycle remains mechanically unchanged, so it’s powered by the same air-cooled unit construction 499cc motor churning out 27.6PS and 41.3Nm. The engine will not be updated to meet the upcoming BS6 norms, so Royal Enfield’s 500cc range (including the Bullet 500 and Thunderbird 500) will be on offer only till 31 March, 2020.

Find the full press release below:

31 January 2020: The Royal Enfield ‘Bullet Classic 500’ was launched over a decade ago, in 2008. Since then, the company’s hallmark UCE 500cc single-cylinder motorcycle has echoed Royal Enfield’s tradition of the long stroke character, producing an unmistakable thump that has reverberated through the hearts of its riders. These 500cc motorcycles were the genesis of the Classic 350 as we know it today, and have been instrumental in Royal Enfield’s success across the world.

Announcing the end of production of the 500cc single-cylinder, long-stroke, unit construction engine motorcycles in India, Royal Enfield today announced an end-of-production, special series motorcycles, the Classic 500 Tribute Black Limited Edition. These motorcycles will be the last in India to carry the iconic long-strokesingle-cylinderr UCE 500cc engine and will be exclusively made to order in a limited production run. Each of the motorcycles will carry a hallmark commemorative ‘End of Build’ serial numbered plaque making it unique to its owner. These motorcycles will be made available through a limited time online sale on February 10, 2020 from 2:00 - 5:00pm. Registrations for the online sale will start today on https://www.royalenfield.com/in/en/classic500tributeblack/

While the company will discontinue the retail sales of the present 500cc motorcycles in India on March 31, 2020, these motorcycles will continue to be available across all international markets. Service and spares will remain available for current owners across all dealerships in India.

The Royal Enfield Classic 500 Tribute Black Limited Edition motorcycles will bear the distinguished and iconic pin-striped just like the Classic 500s that were rolled out of the Royal Enfield Thiruvottiyur facility in 2009. For the first time, Royal Enfield will have a dual tone scheme on the fuel tank with fenders carrying glossy black and matt black. This unique all-black-livery and dual-toned shade adds a unique touch to the timeless aesthetics of the motorcycle. With an End of Builds Special Edition badge and a trendy all-black theme, the Classic 500 Tribute Black is an absolute collector’s edition.