The fifth round of the Pulsar FOS saw participants scorch the track at Aamby Valley in Lonavala, Pune 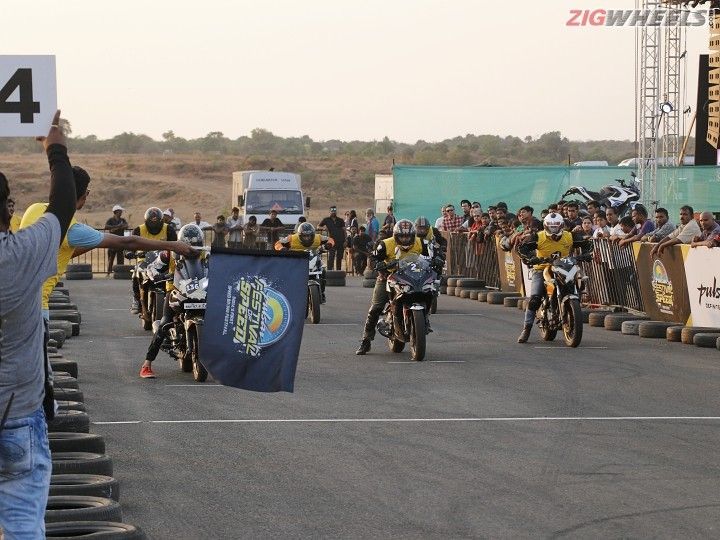 The second edition of the Bajaj Pulsar Festival of Speed is coming to an end with rounds in Gurugram, Chennai, Bangalore and Hyderabad already concluded. The fifth don'ts of the event was held on the Aamby Valley airstrip in Lonavala, Pune. The fifth round is a joint event for both Mumbai and Pune and saw riders from both cities race for glory on two separate racetracks made at the venue.

First off, a back story on the history of the Bajaj Festival of Speed. Started in 2015, the event aims to bring Pulsar riders and enthusiasts alike together for a gala event that includes two sections – races and carnival. The carnival is meant for onlookers to enjoy stunt shows and also indulge in shopping motorcycle merchandise and enjoy some good musical revelry.

The races are meant to be a platform for good riders to showcase their riding skills in a controlled environment with the inclusion of appropriate safety gear. There are three categories – Pulsar NS200 & AS 200 class, Pulsar 220 class and RS 200 class. The winners will be chosen via elimination and the final two riders from each class.  The winners selected from each of the six races (36 in total) will head to the final round to be held at the Kari racetrack in Coimbatore. The first three winners of the final round will share cash prizes worth Rs 2.7 lakhs amongst them.

This edition too had a lot to offer other than the races. Visitors had the option to shop for riding gear and biking merchandise. You could participate in an arm wrestling competition or undertake a session of CrossFit training. Those inclined into stunt riding could enjoy stunts performed by a BMX cycle stunt troupe or head the other way to be enthralled by motorcycle stunts performed by the Ghost Riderz. There was also a stunt clinic where prospects were taught the dos and donts of stunting and tips on how to prep your bike for stunting. There was also a Pulsar 220 clamped on a rig on which you could hone your burnout skills.

If that wasn't enough, Indie Rock band, Indian Ocean performed amidst a roaring crowd as the evening descended.

The racing section had two separate tracks for the Pune and Mumbai racers and also a new interesting addition in the form of a drag strip. The long Aamby valley airstrip provided the perfect backdrop to conduct a drag race here. The drag race event is not a part of the series but was exclusive to just this round. The event saw two categories -  one for the Pulsar NS 200, RS 200 and AS 200 and one for the Pulsar 220. The winner from both categories was decided by the fastest times covered and were awarded exclusive Pulsar goodies. It was heartening to see the manufacturer provide full leather riding suits, riding boots and riding gloves to the riders participating in the drag race. It meant that you just needed to get your helmet and bike along and on registration, get to ride with proper safety gear.

The main event saw a lot of action and spills as six riders each were set loose on the racetrack for a four lap race. The heat was on as the six riders scrambled for pole position on the tight circuit. The knockout-type racing series eventually saw Akash Vatmare from Pune being crowned the winner followed by Aejaz Patel and Vinay Channboyawelu.

The next round will be held in Coimbatore on April 9. It will also see the final round happening around the same time at the Kari Motor Speedway. While most of the rounds are over, those in Coimbatore willing to participate can head to the Bajaj Pulsar website to register.

Pune Round of Bajaj FOS winners-

Mumbai Round of Bajaj FOS winners-