Kawasaki is accepting booking amounts of upto Rs 1.5 lakh, with deliveries to start next April 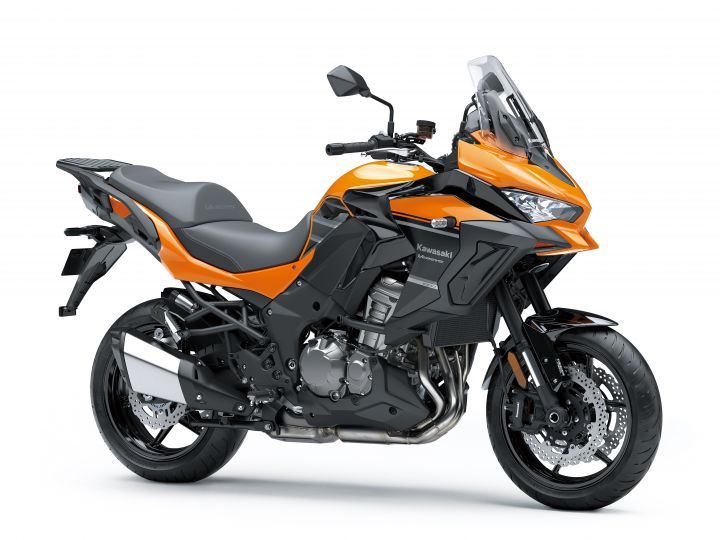 Kawasaki showed off its new Versys 1000 at EICMA this year. (Check out the new Kawasaki range at EICMA). Kawasaki will be launching this bike in India sometime around next April and have started accepting bookings for it now for a minimum of Rs 1.5 lakh. The big news is that Kawasaki is planning to bring the 1000cc ADV to India via the CKD route instead of the CBU one like the previous version. This move should drop prices for the bike from the previous Rs 13 lakh (ex-showroom) to an expected Rs 11 lakh. Bookings for the first lot of this bike will be available till December 31.

The updated Versys 1000 gets a new design more in tune with the new-gen faired Kawasaki bikes, with a sharper LED headlamp and more pronounced beak. It also gets an LED tail lamp and LED turn signals. The instrument console is new and similar to the one seen on the H2, with a digital LCD screen. For long-distance touring comfort you get an adjustable windscreen and a more padded seat.

The 1043cc inline four-cylinder motor now gets ride-by-wire for precise fuelling. It also allows for the fitment of cruise control. The other important update is the introduction of IMU-based cornering management for traction control and cornering ABS. Braking gets a boost via new radially mounted brake calipers. Its suspension setup has also been tuned to deliver a plusher ride.

16th Nov 2018 India Kawasaki announces a launch of Versys 1000 MY2020 by opening pre-booking facility for customers. The newly introduced Versys 1000 in the Indian market will be a standard variant, which will be assembled locally in the plant of India Kawasaki Motors. Boasting even greater comfort and versatility, the Versys 1000 is designed to offer maximum riding enjoyment across a wide variety of street riding situations like its predecessor. Its relaxed, upright riding position offers a high level of machine control, and is complemented by a highly comfortable seat and good wind protection, making it easy to spend a long time in the saddle.

Mr. Yutaka Yamashita, Managing Director, India Kawasaki Motors Pvt. Ltd, said, “Versys 1000 is known as any road, any time motorcycle. It also has the most versatile adventure-style for fun sport riding and touring. The locally assembled Versys 1000 certainly gives us an advantage to sell the bike at a very attractive price, but most importantly, we are happy to create more buying opportunities for our highly enthusiastic customers. We had a good success with earlier Versys 1000. In the recent times, we have received good number of enquiries from customers and therefore we again expect a good success with the new Versys 1000.“

A key to the Versys 1000’s fun factor is the exciting liquid-cooled, in-line four engine, which delivers more than just performance figures. The new Versys 1000 benefits from numerous upgrades that add to both riding exhilaration and touring potential. The engine now boasts Electronic Throttle Valves (ETV), which enable the addition of Electronic Cruise Control. The ETV system is Kawasaki’s first system with the accelerator position sensor located in the handle. Eliminating the throttle cable means less maintenance. In the standard model, updated front and rear suspension settings contribute to plusher feeling suspension.

While the Versys 1000 will be available in candy steel furnace orange colour, its ex-showroom price and specifications will be released in due course of time. Customers can pre-book the Versys 1000 MY2020 for an amount of Rs. 1,50,000 at the authorized dealership of India Kawasaki Motors and can expect the delivery of the bike post April 2019. The pre-booking facility is open from 16th November 2018 till 31st December 2018. As this bike will be produced in limited numbers in first lot, the bookings will be closed after reaching targeted numbers.