Both Kawasaki’s are touring motorcycles. So how are they different from one another? 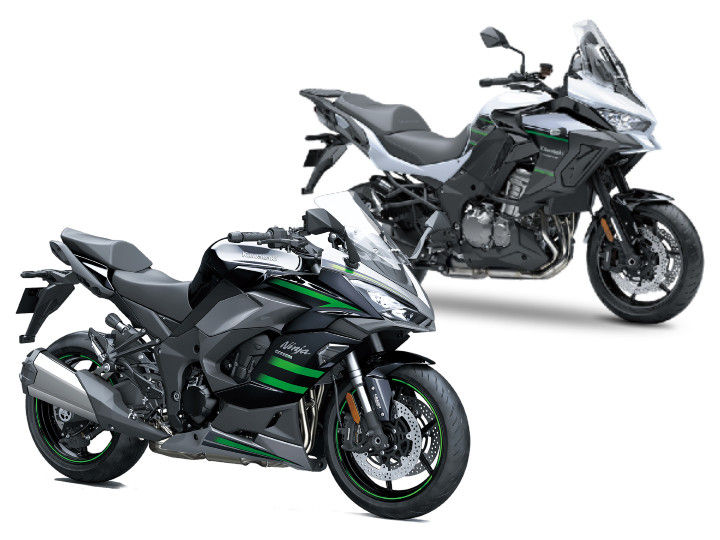 Kawasaki India offers two-litre class tourers in India: the Ninja 1000 and Versys 1000. Both motorcycles are now BS6 compliant and share the same in-line four engine as well. However, both cater to different categories of touring. Here’s how the Ninja 1000SX BS6 is different from the Versys 1000 BS6.

The Kawasaki Ninja 1000SX caters to the Sports Tourer segment while the Versys 1000 belongs to the adventure tourer category. The Versys though, is not meant for off-roading since its suspension and tyres are primarily meant for road use. Both motorcycles get a fairing with twin LED headlamps inspired by the newer Ninja’s. Both get adjustable windscreens too. But while the Ninja 1000 has a raked out unit that gives it a sporty stance, the Versys 1000 gets an upright unit that goes well with its upright riding position. While both are large motorcycles, the Versys 1000 looks more intimidating owing to its height.

The Versys 1000 should be more capable over the rough stuff owing to its taller ground clearance. It’s also capable of offering better range thanks to a larger fuel tank. The Ninja 1000SX has a shorter seat height and weighs less, so it should be easier to manage. That said, both bikes are quite hefty when compared to their respective competitors.

The Ninja 1000SX feels more like a sportsbike that’s built for touring. It gets clip-on bars and rearset footpegs, both of which are positioned for a sporty yet comfortable riding position. As part of the BS6 update, the Ninja 1000 SX gets a comfier pillion seat. The Versys 1000 gets an upright riding position. Its high set handlebars allow you to stand up and ride comfortably.

Given its better performance, the Ninja 1000SX gets a fully adjustable front suspension. The Versys 1000 gets semi-adjustable but thicker front forks with long travel suspension to soak up rough roads better. Surprisingly, the Versys 1000 gets better brake components than the Ninja 1000SX. It appears that the heavier ADV gets more sophisticated brakes to slow it down better. The Versys 1000 also gets a narrower but larger profile tyre for better cushioning over the rough stuff.

Which one should you go for?

If you want a sportsbike that is comfortable enough to travel long distances on well-preserved highway roads, you will have immense fun on the Ninja 1000SX. If you want a more comfortable touring experience and want a bike that can be ridden over dirt roads as well, the Versys 1000 is the more versatile of the two.