While this is a concept model, it looks pretty much production-ready 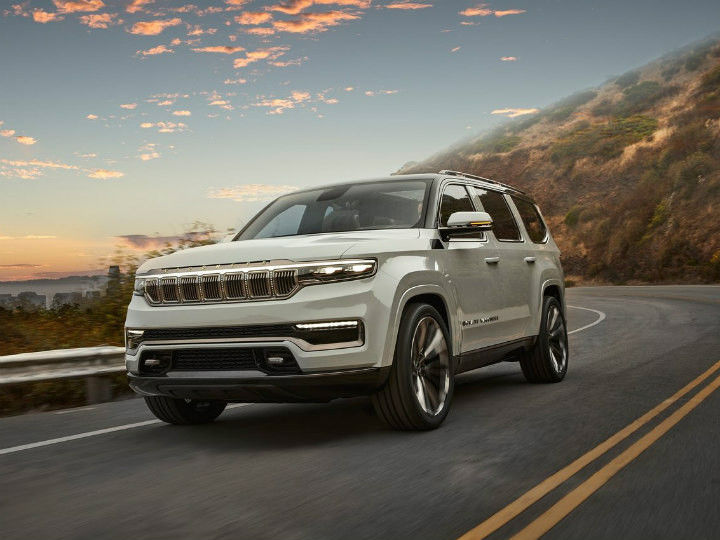 The Jeep Wagoneer moniker has been an iconic one for the Jeep brand since its debut all the way back in 1962. The American born 4x4 was a pioneer as the first four-wheel-drive vehicle mated to an automatic transmission and had a long run till 1991. A return was announced back in 2011 and we’ve had a long wait. But now after almost 30 years, the iconic Wagoneer nameplate is back in the form of the Grand Wagoneer Concept. While technically a concept, it certainly seems production ready by the looks of it.

On the outside, the Grand Wagoneer full size SUV concept looks futuristic, yet bold with a front end featuring a sleeker version of the traditional Jeep 7-slat grille. But if you look closer through the slats, its actually illuminated with LED lighting that spans the entire width of the grille. A pair of LED bi-functional LED projector headlamps and Wagoneer badging on the hood makes up the front end.

Heading over to the sides, you get a contrast full-pane glass roof, showcasing a map of Detroit and the surrounding area, a massive set of multi-spoke 24-inch wheels as well as Grand Wagoneer badging on the lower front doors with the American flag pay homage to the Grand Wagoneer’s American origins. Rounding off the design aspect is a pair of wraparound LED tail lights, rear diffuser and powered tailgate.

It also boasts a plethora of tech with the latest UConnect 5 system that Jeep claims is five times faster than its previous iteration. You also get a premium McIntosh audio system consisting of 23 custom-designed speakers connected to a 24-channel amplifier for that optimum audio experience.

Detailed technical specifications on what’s under the hood of the Grand Wagoneer concept haven’t been revealed, but Jeep has confirmed a plug-in-hybrid powertrain as part of Jeep’s electrification roadmap. It also packs three available 4x4 systems, a Quadra-Lift air suspension, as well as an independent front and rear suspension.

Production-spec versions of the Wagoneer and Grand Wagoneer will be built in Warren, Michigan, with both SUVs set for a launch in the USA by 2021. The Grand Wagoneer itself could be a platform for a premium line of future Jeep models, something like what Mercedes-Benz does with the Maybach line of models. It will take on the likes of the Cadillac Escalade and the Land Rover Range Rover once launched.