Two beginner-friendly ADVs from brands with proven off-road records, but which one pulls it off better? 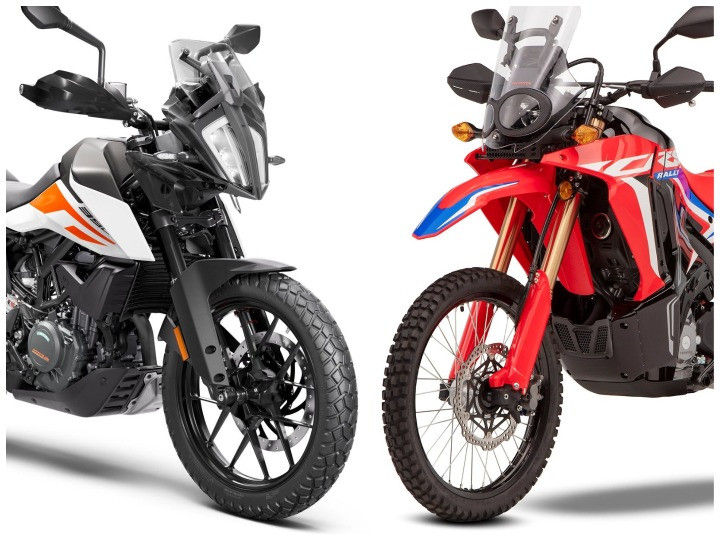 When a brand with proven experience in building off-road and adventure motorcycles decides to build a small-capacity ADV, the expectations are high, given everyone’s newfound love for the genre in India.

The KTM 390 Adventure didn’t really turn out to be the ADV everyone hoped for, considering the brand’s off-road prowess. Now, Honda has unveiled its CRF300 Rally, and the bike looks like it means serious business. So, here’s how the two ADVs from two Dakar-conquering brands stack up against each other:

Okay, with the 87cc displacement advantage, the KTM is definitely the more powerful of the two. It should be fun on the highways and off the tarmac too, right? Well, KTM’s decision to plonk the 390 Duke’s engine without fiddling with its tuning or even its sprocket size results in a bike that doesn’t have the low-end punch to get you out of tricky situations.

The Honda, on the other hand, uses the CB300R-derived engine but it’s been retuned for this bike. Not only does the engine deliver its peak torque 500rpm earlier than the KTM, but the closely stacked gear ratios deliver torque from 2,000rpm, while the KTM feels almost lifeless under 4,000rpm.

Honda's traditional frame is suspended on Showa’s USDs at the front and a linked monoshock at the rear, which handles all the undulations with grace. Though the brand hasn’t mentioned the suspension travel, the fork and monoshock have a stroke of 260mm, which we presume would result in better travel than the 390. Being a true-blue ADV, the CRF uses a 21/18-inch wheel setup, giving it superior handling abilities in the dirt. As for the brakes, we expect the KTM to have the upper hand.

Despite the Austrian brand’s off-road prowess, the 390 Adventure isn’t really great when it comes down to serious business. The 170mm suspension travel at the front and 177mm travel at the rear isn’t really the best in the business. Another bummer for Team Orange is the 19/17-inch wheel setup, coupled with the alloy wheels, which means the bike isn’t really the one for serious off-roading. That said, the tubeless tyres ensure you don’t get stuck in case of punctures.

The KTM’s 25mm shorter wheelbase makes it more agile compared to the Honda. However, factor in the 24kg weight difference, and the Honda should be more manageable in the dirt. Making Team Red’s case stronger is the SUV-shaming ground clearance. While the KTM boasts of a bigger fuel tank capacity, the Honda’s smaller engine and weight should give the bike equal, if not more range than the 390. As for the seat height, both bikes have tall saddles, but the Honda’s seat height is 5mm more than the 790 Adventure R!

Okay, the 390 clearly takes the cake here. Though traction control and the quickshifter aren’t really top-shelf stuff, they work. The CRF300 gets a simpler LCD display, so it skips on features such as navigation and smartphone connectivity. Surprisingly, the Honda doesn’t get a provision to even switch off the ABS at the rear wheel, something every ADV fanatic would want.

Though the CRF300 Rally isn’t as tech-savvy as the KTM, it is what one would expect from a beginner-friendly ADV -- an easy-to-ride bike with ample ground clearance and good suspension. The 390 Adventure, on the other hand, is a great tourer, which can handle some rough roading, but anything beyond that isn’t advisable. Maybe KTM will fix that with the 390 Adventure R.