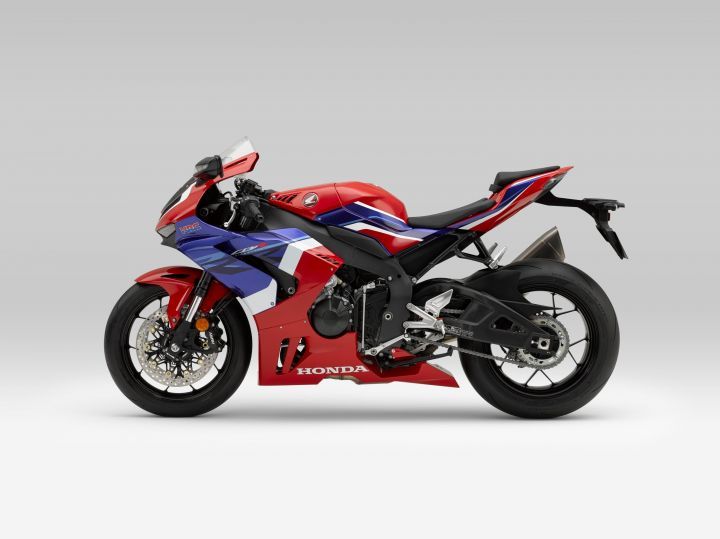 When the Europeans were busy launching one 200PS+ superbike after the other, Honda was secretly working on its new CBR1000RR Fireblade to give them a run for their money. And at the 2019 EICMA, Honda has finally entered its name into the esteemed 200PS club with the new CBR1000RR-R Fireblade. We know it’s kind of weird to add some many ‘R’s in the name, but that extra ‘R’ is more than just a suffix; it means serious business! Actually, you know what, showing is much better than talking as they say, so let’s dive right into these hot new images.

Before we go into the nitty gritties, can we just take a moment to admire what Honda’s designers have come up with?

The Honda CBR1000RR-R Fireblade will be available in two variants: standard and SP. As you might have guessed, the SP variant, being the top-end model, gets all the bells and whistles plus that gorgeous HRC paint scheme.

Honda has completely redesigned the front end of the new-gen CBR1000RR, making it slimmer. You could also say it looks angrier now thanks to those LED headlamps.

Ducati isn’t the only manufacturer to carry forward its MotoGP teachings onto a road-legal bike, because Honda has done the same thing here. It gets wings! Yes, that’s a plural: It gets three small wings to increase downforce.

It gets an all-new 5-inch colour TFT screen which we’re guessing should display everything you could possibly need on the track.

That’s what you will see while astride the new CBR1000RR-R. And oh, there’s a joystick on the left-hand side of the handlebar to change the settings on the TFT screen, which should keep you entertained for a while.

Both the variants come equipped with a titanium AkrapoviÄ exhaust, which we think will make enough noise to keep your ears ringing for a day or two.

The rear tyre is a larger 200-section radial unit for a bigger contact patch and traction.

It gets a new six-axis IMU and a whole suite of electronics including five power modes, three engine braking levels, multi-level traction control (plus off), cornering ABS, wheelie control and more!

There’s no confirmation as of now, but expect the new Fireblade to come to our shores by the end of next year. And if you’ve already set your heart on acquiring one, start saving up, ‘cause it won’t be cheap.