The Husqvarna Svartpilen 401 Is Just Around The Corner

The Indian version of the Svartpilen 401 gets minor modifications 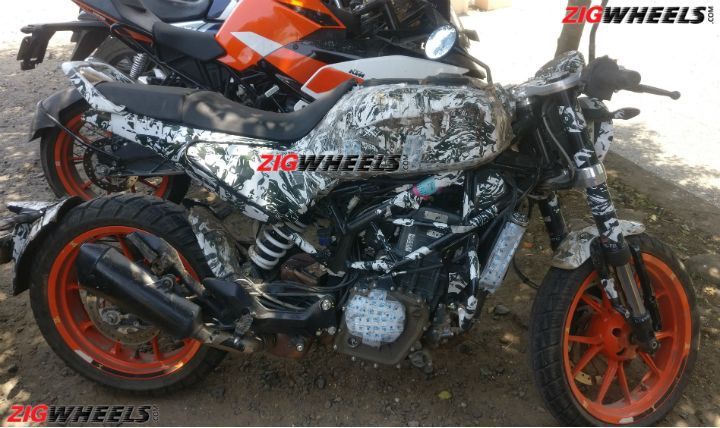 It has been a while since the Husqvarna 401 twins were last spotted. However, our eagle-eyed photographers were able to spot and snap up some new images of the Svartpilen 401 -- and in an Indian production-ready form, no less. Production of the 401 twins is expected to begin soon as some KTM dealerships have already begun bookings for the stylish Swedish bikes. KTM dealerships are expected to undergo a slight makeover to facilitate sales of the new Husqvarnas.

As is evident from the spy shots, the Svartpilen 401 is heavily Indianised. Gone are the spoke rims that were shod with Pirelli Scorpion Rally STR tyres. Instead, India is likely going to get alloy rims lifted off the 390 Duke, running on specially developed block pattern tyres from MRF.

The standard tyre hugger has been fitted with the India-mandatory saree guards and the rear turn indicators moved from it to either sides of the brake light. Given our Indian road and traffic conditions, this is a wise move indeed.

While the sharp tail design has not changed, its rather abrupt rear end seems more complete now thanks to the addition of the pillion grab handle. This bit is available as an accessory abroad but is being made standard here as Husky has to comply with Indian homologation laws. Although we did not spot any braced member on the handlebar of the test mule, it seems likely that the final bike might have one as there are ready provisions for the bracing. The seating area is likely to be longer on the India-spec bikes but we will confirm the same once the final bikes are revealed.

Powering the Svartpilen 401 as well as its cafe racer sibling, the Vitpilen 401, is the 373.2cc single-cylinder mill from the KTM 390 Duke. While these new images do not reveal anything new about the powertrain, we know from our earlier spy shots that the Huskies will come with a larger cat-con that’s BS6-compliant. Outputs are to remain the same at 43.5PS and 37Nm. It gets the same six-speed gearbox with a slip-and-assist clutch as the 390 Duke.

We can expect to see these bikes in the next few months at all KTM dealerships. The Vitpilen 401 cafe racer is likely to be priced at Rs 3.00 lakh - Rs 3.20 lakh while the Svartpilen 401 could come bearing a sticker price of Rs 3.10 - Rs 3.30 lakh (ex-showroom Delhi). Deliveries for the bikes should begin late December 2019 or early 2020.