For over two decades BMW have been making the M3 and M5 performance saloons, the benchmark for performance cars all over the world. Now however, BMW have now put their minds to electric and hybrid cars. Let's take a look at what they have come up with

BMW has started a new brand called BMW i. The i brand has been set up with the motive of creating premium products with sustainability in mind. With the i brand BMW wants to redefine personal mobility by focusing on a sustainable value chain and a host of complimentary mobility services. More about that later, let’s cut to the chase and get to the cars. 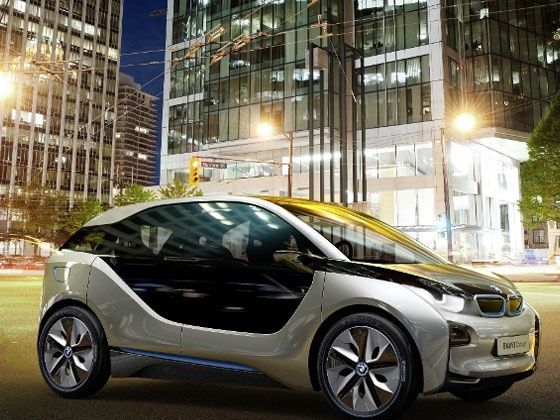 The BMW i3 concept is a fully electric hatchback. The car is aimed at the idea of a economical, emissions free city car. And with a range between 130 – 160 kms one can’t just ignore the idea of an electric car anymore. 130 kms is a reasonable enough range for the daily commute to work and back, unless you are a door to door sales man that is.

And that’s not all, the i3 is rear wheels drive! There is a 125kW electric motor at the front and the car could have, should have been a front wheel drive. But let’s not forget, BMW’s M division makes some of the best driver’s cars of all time. The i3 concept has been made rear wheel drive to provide a BMW like driving experience. The i3 can do 0-100 km/h in 8 seconds.

The car is designed in what BMW call their LifeDrive architecture. What it means in essence is that while electric cars are designed with a traditional internal combustion unit layout in mind BMW have started with a clean slate. The car has been designed purely with the technical requirements of an electric drive train. The car is designed with to be as light and safe as possible by using aluminium to build the suspension, drive systems, body structure, battery, crash structure while the body is made of carbon fibre-reinforced
Plastic (CRPF). The result is a car that weighs only 1250 kilograms with optimum interior space for four passengers, a 200 litre boot and meets the highest crash safety norms.

The i8 concept is BMW’s take on a hybrid sports car. Staying true to BMW dynamics they have very cleverly mounted the three cylinder petrol engine over the rear axle while the electric motor has been mounted in the front. The batteries have been cleverly located in the floor of the car. The internal combustion engine is a turbo charged 1.5 liter unit that makes 164kW/220 horsepower and can punish the rear tyres with 300Nm of torque. The electric motor produces 96 kW of power with 250 Nm of torque. Both the power mills can catapult the i8 from 0-100 km/h in 4.6 seconds and onwards to an electronically limited top speed of 250 km/h.

The i8 has a purely electrical range of approximately 35 kms. The battery like in the i3 can be fully charged in six hours from a standard electric socket, however, if a high-speed charger is used up to 80% of the battery can be charged in an hour. The i8 can seat four passengers in comfort and has 150 litres of storage space.

With the BMW i brand the company is building its position towards being the most innovative and sustainable car maker in the world. BMW i is aiming at providing mobility solutions of the future. In addition to electric and hybrid cars BMW is going to offer intelligent mobility solutions of the future such as improved use of parking space and booking parking spaces before the car arrives at the designated spot (the parking spaces can be booked for a duration of time), intelligent navigation systems, location-based information, intermodal route planning and car sharing schemes.

BMWs electric and hybrid cars will be built in their Leipzig plant in Germany. Vehicle production is meant to be with renewable energy and CO2 emissions will be neutral. BMW is considering the possibility of building its own wind turbines on the plant site.

The BMW i3 is due to be launched in 2013 while the i8 is due for 2014. The Chairman of the Board of the BMW Group, Norbert Reithofer, said, “As the world’s leading premium car manufacturer, our aim is to offer customers purpose-built electric-drive cars”.

BMW have taken a bold step towards the future of electric cars. The i3 and i8 atleast on the surface appear to be electric cars that can be used everyday. Combined with the clever mobility solutions from BMW i the cars have a potential to sustain themselves in the automobile market.