The Pulsar NS160 was recently spotted at dealerships, indicating the probable launch of the bike in the near future. How does it fare against the veterans in the segment? Read on to find out. 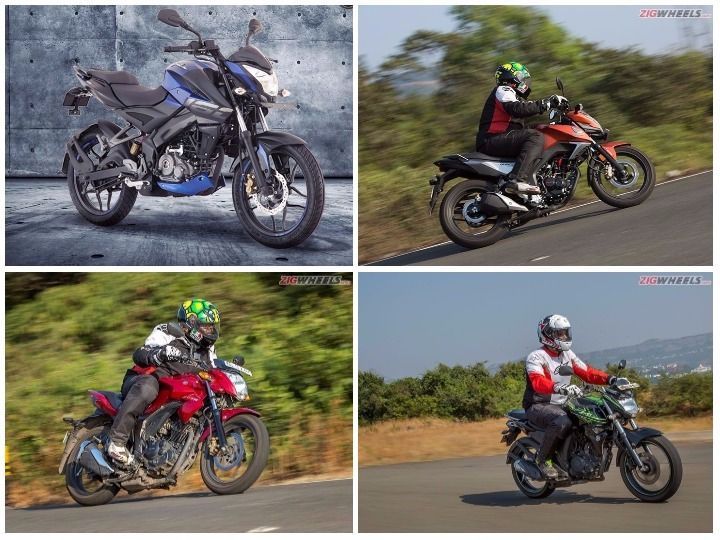 The 160cc naked segment is one of the most popular segments among enthusiasts and young buyers in the country. It’s a no brainer considering the bikes in this segment have adequate performance backed by sporty looks; an apt recipe to appeal to riders looking for maximum cool-factor with minimum expenditure. The Honda CB Hornet 160R, Suzuki Gixxer and Yamaha FZ-S FI have already been ruling this segment, so let’s see how Pulsar’s upcoming bike fares against these rivals. Also read: Bajaj Pulsar NS160 India Launch Soon

The Pulsar NS160 employs a front telescopic fork with 130mm of travel and the rear uses a Nitrox monoshock with 120mm travel. The braking duties are taken care of by a petal disc at the front and a drum at the rear and the wheels are shod with 80-section tubeless tyres at the front and a 110-section unit at the rear. With a fuel tank capacity of 12 litres, expect decent range from the 142kg (kerb) bike. When it comes to the instrument cluster, the bike uses an analogue-digital combo unit, similar to its bigger cousin, the Pulsar NS 200.

The Hornet is built on a diamond-type frame which is suspended by telescopic forks at the front and a monoshock at the rear. Coming to the brakes, the bike is anchored by a 276mm petal disc at the front and a 130mm drum at the rear. A rear disc brake with Combined Braking System (CBS) is also available as an option, which improves the braking characteristics by distributing the brake force to both wheels. The alloy wheels are wrapped with 100-section tubeless tyres at the front and a generous 140-section at the rear. The bike tips the scales at 138kg, while the CBS variant is 2kg heavier. The bike uses an all-digital cluster to display speed, revs, odo readings, trip readings and fuel level. The only grinch is that the bike lacks an engine-kill switch. Like the NS160, the Hornet too has a 12-litre fuel tank. Also read: Honda CB Hornet 160R : Detailed Review

The Gixxer also uses a diamond frame and the suspension duties are taken care of by 41mm telescopic forks at the front and a 7-step adjustable rear monoshock. The bike comes with a full-digital instrument cluster which also displays gear position and a programmable gear shift light apart from the usual read-outs like speed, revs, etc. The bike uses a disc at the front and drum at the rear while an optional rear disc variant is also available. With a kerb weight of 135kg, the bike is nimble enough for city commuting and the fuel tank is capable of holding 12 litres of juice. Just like the Hornet, the Gixxer also uses a 100-140-section tyre combination. Also read: Suzuki Gixxer : Detailed Review

Yamaha has employed a diamond type frame for its naked bike, the FS-S FI. The frame is suspended by telescopic forks at the front and a monoshock at the rear. An all-digital instrument cluster does duty in the FZ and the bike is anchored by a disc at the front and a drum at the rear. Sadly, a rear disc brake is not available even as an option. Instead, you get a cool Matte Green colour edition which is about 1000 bucks more than the standard FZ-S FI. The FZ also uses a 100-section front and a 140-section rear tyre. The fuel tank capacity is 12 litres and the bike tips the scales at 132kg, which makes it the lightest among the four. The light weight, coupled with the fuel-injected engine should ensure good efficiency too. Also read: Yamaha FZ S : Detailed Review

The Pulsar NS160 is expected to command a price tag of Rs 85,000, ex-showroom, Delhi. The Suzuki Gixxer is the cheapest among the four, with prices starting at Rs 77,936, and the rear disc brake version at Rs 81,013, both ex-showroom, Delhi.

The Honda CB Hornet 160R is priced at Rs 82,537 for the standard variant and Rs 87,037 for the CBS variant, both ex-showroom Delhi. The Yamaha FZ-S is available for Rs 83,674 ex-showroom, Delhi for the standard colour variant. The specifications of the Pulsar NS160 taken into consideration is from the version sold in Turkey since we expect the bike to be launched with the same specifications in India as well.