How Does The New Baby Pulsar NS125 Fare Against Other 125cc Bikes?

Is the Bajaj Pulsar NS125 the perfect middle ground between commuters and a pure performance-oriented naked in the 125cc segment? 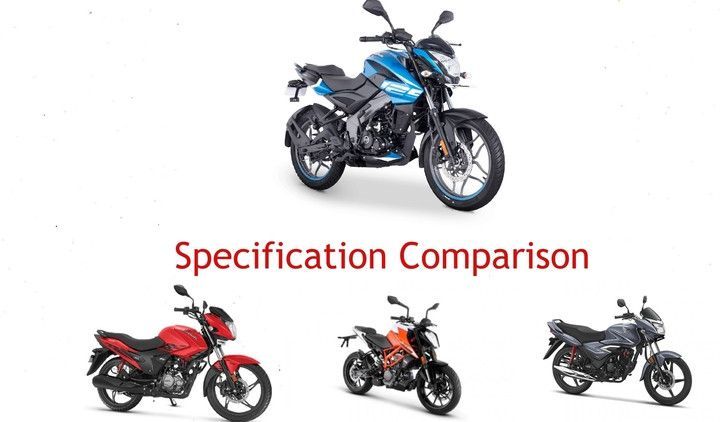 Until the KTM 125 Duke  arrived, a performance-oriented 125cc motorcycle in a price-conscious market like ours seemed a preposterous idea. However, the baby Duke became an instant hit and was even the best-selling KTM for a few months. Now, Bajaj is looking to replicate the Austrian brand’s success with its new Pulsar NS125. But if you are looking to start your motorcycling journey with a 125cc bike, do you really need to splurge close to a lakh of rupees, or are you better off with more economical options like the Hero Glamour 125 and the Honda Shine?

Liquid cooling, double overhead camshaft, 4-valves and even a six-speed gearbox -- the KTM 125 Duke certainly packs the most superior engine of the lot. While this translates to better performance, it also comes at the cost of more fuel consumption and maintenance costs.

The Glamour, Shine and the NS125 on the other hand employ simpler air-cooled engines which do not replicate the KTM’s performance but are easier to live with. Not only are these engines likely to be more fuel efficient than the KTM, they’ll also be cheaper to maintain. Given that these three are also significantly lighter than the Duke, the Austrian’s performance advantage isn’t going to count for much in daily riding scenarios.

Then comes the way these engines are tuned. While the KTM’s high-strung motor will require you to be on your toes to keep it in its powerband, the NS125’s performance is accessible a bit sooner. But if you want more frugal options, the Glamour and Shine certainly fit the bill, packing enough low-end grunt to handle city duties.

The KTM shares its components with its elder siblings, and has thoroughly modern underpinnings compared to other bikes. As enticing as its beefy USD fork and fat radial tyres seem, these are an overkill for a 14PS machine. To top that off, replacing the radials tyres or busted fork seal is likely to cost you twice as much as that of the other bikes. That said, better braking equipment and ABS (single-channel, but still better than CBS) is always a welcome addition.

The Pulsar NS125 strikes the right balance, combining the perks of the trusty perimeter frame, the monoshock from the NS160 and NS200, and a simple telescopic fork, which is likely borrowed from the Pulsar 125. Braking setup is similar to the Glamour and Shine. Bajaj’s decision of not giving the bike a single-channel ABS unit is surprising, especially after the brand launched the country’s most affordable ABS-equipped bike last month: the Platina 110.

The Glamour and the Shine’s traditional setup may seem uninteresting, but this tried and tested formula has been working just fine on our Indian roads. Complimenting that are the 18-inch wheels, which add an extra layer of stability to the riding experience. Both the bikes have the same braking setup and come with the safety net of combined braking.

The technically advanced engine and superior underpinnings add bulk to the baby Duke. At 159kg, it is 44kg heavier than the Honda Shine! Adding to the Austrian bike’s woes is the 822mm seat height. With the BS6 transition, KTM had to reroute the exhaust under the engine, taking the ground clearance to 155mm, which could result in the bike’s belly scraping over our colossal speed bumps.

The Pulsar gets a similar exhaust setup but thankfully, it still has a respectable ground clearance of 179mm. And not just that, it also has a 17mm lower seat height than its Austrian sibling.

The Glamour and the Shine’s low seat height and lightweight construction makes them easier when tackling tricky situations. While the fuel tank capacity might feel a bit less, both the Hero and Honda engines are primarily tuned to deliver great fuel efficiency. Hence, the range on offer is likely to be much better than the Pulsar’s. The Glamour even comes with i3s tech to help you eke more mileage from the tank.

At Rs 1.61 lakh, KTM is really pushing the envelope with the pricing of the 125 Duke. Especially for someone looking to start their motorcycling journey, the price is a bit too steep. While the Hero Glamour and the Honda Shine are practical options, thanks to their pricing and simpler components, they are probably too vanilla for a young person's taste. That’s where the Bajaj Pulsar NS125 comes in. It offers the practicality of the Hero and Honda bikes, without compromising on the cool quotient or being too heavy on the pocket.