Suzuki enters the premium 150cc motorcycle segment with the new Suzuki Gixxer 155. Can it stand tall to its legendary name? 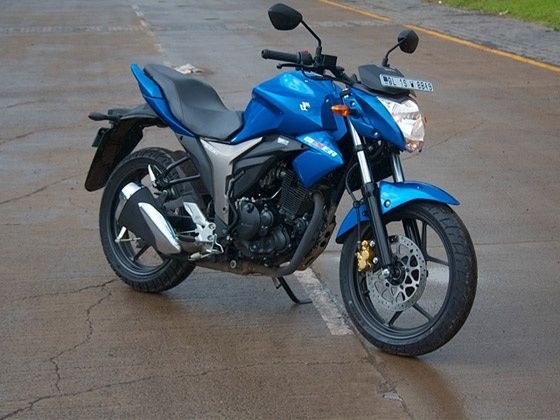 The first-gen Suzuki GSX-R started the race-replica production models trend internationally. It was a bike you could take straight out of the Suzuki showroom and hit the racetrack with. These GSX-Rs (and those that came later) were all fondly called ‘GIXXERs’ by their owners and fans alike. And thus the inspiration for the name of Suzuki Motorcycle India’s flagship new 155cc motorcycle – the Suzuki Gixxer.

The new Suzuki Gixxer has been specifically designed for India and its neighbouring regions with the focus being on styling, fuel efficiency and cost effective production. And the bike scores in pretty much all these aspects. The Suzuki Gixxer is delightfully striking with sharp character lines. Most of these lines also have a purpose, which makes the design twice as nice. The muscular and stylishly sculpted fuel tank has great knee recess offering excellent grip giving the Gixxer a big bike feel and also has the segment standard 12-litre fuel capacity. There’s also the currently trending ‘3D’ Suzuki logo on the tank with edgy tank scoops bearing the Gixxer nomenclature.

It’s a street bike, so the Suzuki Gixxer gets a smart triangular headlight with a bikini fairing. The well chiseled side panels carry a trendy matt black and metallic gold combination. Another unique design aspect is its stout dual-type exhaust, which the company has used for the first time on sub-250cc motorcycle. Suzuki claims that this exhaust design isn’t just for show, but actually helps the process of scavenging.

The execution of the rear design is especially commendable with the body coloured grabrails almost merging in to the side panels and a petite LED taillight. What also impressed me was the carved out seat. And though the pillion seat looks small, it is fairly comfortable. Finally a smart set of ‘Y’ shaped alloy wheels inspired from Hayabusa and GSX-R complete the big brother inspired design. From all angles there’s smooth flowing character lines. I am sure the on road presence will attract plenty of younger riders and having actor Salman Khan as a brand ambassador should help this cause further.

Astride it, and the riding position feels spot on as Suzuki has got the ergonomics right with a great combination of a wide one-piece handlebar, rear set footpegs and 780mm saddle height. The switches and grips have the usual Suzuki quality and finish. Some metal bits around the front fork and throttle grip showed signs of rusting, which was brought to the company’s notice, and hopefully it will be resolved in the production models.

The Suzuki Gixxer has a modern smartphone resembling fully digital speedometer, which has gear position and rpm indicator, along with the regular tacho, odo, trip meter and a fuel gauge. The kick-start has an interesting ‘S’ shape to bypass the rear brake pedal when used.

I opted for the more convenient electric-start to crank-up the newly developed 155cc. It’s a single cylinder, SOHC, air-cooled and carburetted engine which comes with a five-speed gearbox. The engine and the bike’s handling have been developed under the watchful eyes of the same designers who have also produced the Suzuki GSX-R series. There’s no comparison of the power ratings of both these bikes, as the Gixxer produces a modest 14.8PS of peak power at 8,000rpm and 14Nm of maximum torque at 6,000rpm.

Slotting in to first, the clutch feels light and progressive as one has experienced in most Suzuki bikes. The power delivery is smooth and the bike doesn’t protest when revved high, while the engine remains vibe free throughout. It does have a decent low-end torque which makes it good to ride at city speeds, but mid-range and top-end power isn’t exceptional. The bike feels best when it isn’t pushed too hard as power tends to flatten out on the top. Probably a compromise to attain higher fuel efficiency.

This lightweight motor is equipped with the company’s SEP (Suzuki Eco Performance) technology that reduces mechanical losses. Using which, the company claims, the Suzuki Gixxer 155 returns the best in class fuel economy of 63.5kmpl. So, in real world conditions, expect it to return around 50-55kmpl.

Weighing just 135kg, the Suzuki Gixxer is pretty light and extremely nimble. The weight distribution is well sorted and the wide handlebar also adds to the manoeuvrability. The beefy 41mm front forks and 7-step adjustable rear mono-shock suspension are tuned to match the wide rear tyre and also aid handling. The ride is on the softer side, to be more compliable in the city. Which too, as you’ve just read, can be adjusted and firmed up to your liking, to improve agility further.

Braking isn’t an area of concern either, with the front disc (230mm I’m guessing) and basic drum (130mm guessing again as the company hasn’t shared these numbers) brakes imparting a good feel and reasonably strong bite. I must also mention the terrific grip from the newly developed 17-inch MRF tyre (100/80 – 17 front and 140/60R – 17 rear), which made riding in heavy rains fun and these dramatic pictures possible.

This is a worthy city-based sporty 155cc bike, with distinct design and enviable refinement. Priced aggressively at Rs 72,199 (ex-showroom Delhi), it undercuts most of its competition by about Rs 3,000, including the Yamaha FZ series, which the new Suzuki Gixxer squarely aims at.