BMW’s Most Powerful M Car, The XM SUV, Will Be Unveiled On September 27 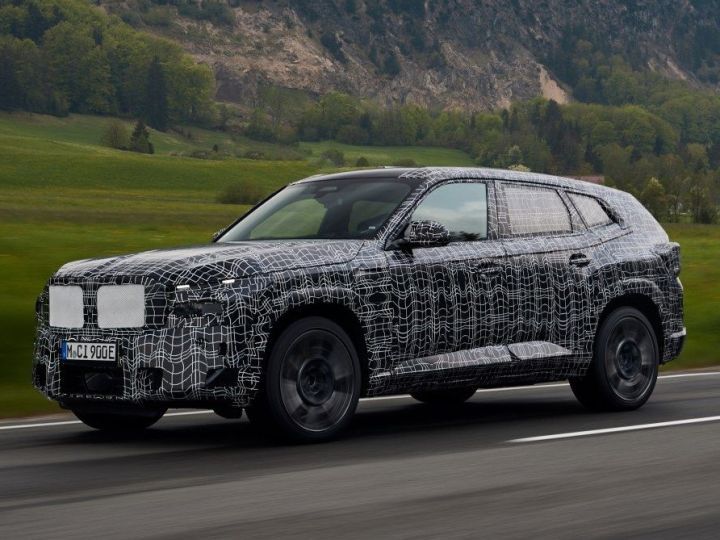 BMW’s M high-performance division will take the wraps off its most powerful vehicle ever on September 27. Simply called the XM, it’s a plug-in hybrid BMW that combines V8 power with a capable all-electric powertrain to give its driver the best of both worlds – silent in-town motoring and screaming power on the track or highway.

This is the first glimpse we’ve had of the upcoming SUV’s production-ready form sans camouflage. It has an illuminated front grille, similar to the Concept XM, with dual-element LED DRLs and headlights placed below, similar to the X7 SUV.

Inside, it’ll get a curved display that houses the driver’s instrumentation and infotainment screens within a single panel. Other features should include sports seats and a panoramic sunroof, but not a lot has been revealed thus far.

The Concept XM was proclaimed to be BMW’s most powerful M-badged performance vehicle. Indeed, the production-spec vehicle has been revealed to have 650PS and 800Nm, narrowly beating the previous “most powerful M” car, the M5 CS.

It will be equipped with BMW’s Adaptive M Professional suspension with a conventional spring-and-damper setup, but the dampers will be electronically controlled by a 48-volt system. It’ll also get speed-adaptive steering as standard for better in-town manoeuvrability.

With its plug-in hybrid system, the XM will offer up to 80km of all-electric range (WLTP). Later in 2023, the carmaker is expected to introduce an even more powerful version of the XM with 750PS and 1000Nm!

Could the BMW XM come to India?

The BMW XM will reportedly only get a plug-in hybrid powertrain. It will be produced from December onwards in the US and will be sold in North American and European markets. This makes it less likely to arrive in India, owing to the small market size for plug-ins compared with ICE and even all-electric vehicles.

That said, BMW had launched the i8 in India previously, and does offer the iX electric SUV, so the PHEV XM SUV isn’t entirely inconceivable. Still, the SUV will likely be imported as a fully built unit, which could push its price well past other BMW M models.