Like its concept form, the XM looks big and brawny despite the heavy disguise 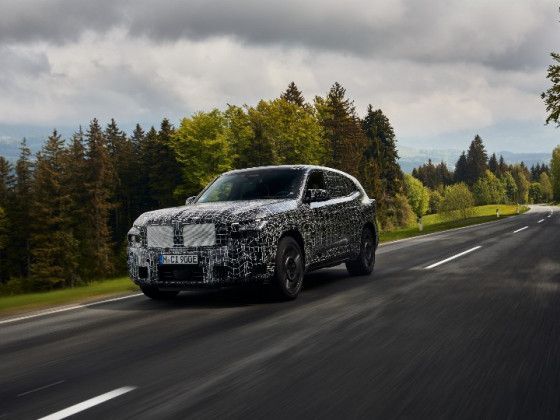 Remember the big and brawny BMW Concept XM that showed up in November 2021 with a debut slated for late 2022? Well, the Bavarians have dropped the first images of the second standalone ‘M’ model in near-production form. The brawny SUV has begun its testing phases ahead of its debut.

Crucially, the carmaker has also revealed what will be the brawns under the hood of the production-spec XM. Like the concept, it’ll combine a beefy V8 and a plug-in-hybrid electric motor, but will produce 650PS and 800Nm. While it's a downgrade of about 100PS and 200Nm over the concept, it will still be the most powerful M model to date.

Paired with a hybrid-specific M xDrive four-wheel drive system, it should be able to comfortably sprint to 100kmph from a standstill in under four seconds. What remains unchanged with the concept is its ability to go up to 80km in full EV mode.

BMW also teased some interesting performance wizardry onboard the XM, with adaptive M Professional suspension and an electromechanical roll stabilising system. There’s also an Active Roll Comfort feature that simultaneously reduces rolling movements on uneven roads on one side of the SUV, and adjusts the ride height on the other side of the vehicle. Integral Active Steering helps keep the XM agile and stable while tackling corners.

While the XM prototypes are wrapped in camouflage, it has retained most of the brawny look from the concept. Sure, it doesn’t seem to have sharp edges all over, but it rides high enough to give it a menacing presence. The traditional kidney front grille continues to take up frontal real estate, and it seems to have retained the concept’s sleek headlight setup.

We’re yet to have a proper look at the cabin, but it should remain largely similar to the concept, considering how civilised it looked. Highlights in the Concept XM included a blend of brown leather, copper and carbon fibre materials, diamond-stitched velvet bench seat for the rear passengers,  three-dimensional illuminated prism structure on the headliner, and BMW’s latest iDrive 8 curved digital driver display and touchscreen infotainment screens.

After its late 2022 debut, we could expect the BMW XM SUV to show up by 2023. Meanwhile, BMW is planning on launching the i4 electric sedan on May 26.