The latest sighting hints at the bike’s highway capabilities 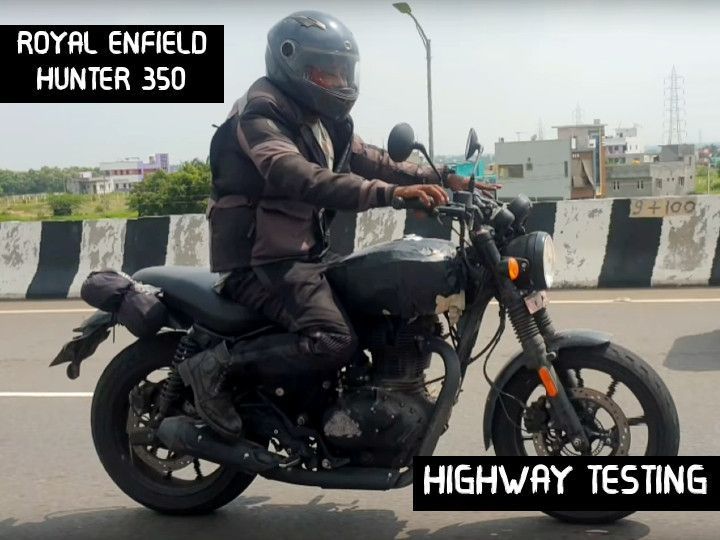 The upcoming Royal Enfield Hunter 350 has been spotted once again, this time during highway testing.

The video shows a pre-production model, with the bodywork hidden in camouflage and black coverings. Nevertheless, the overall design is similar to the previous test mules and gives serious Triumph Street Twin vibes from the side. Even the riding posture looks similar to the Street Twin with a single-piece seat, a slightly low handlebar, and low mid-set footpegs.

Design elements include a round headlight, indicators, and tail lamp -- all adding to its retro nature. Meanwhile, the blacked-out mechanicals and alloy wheels add a pinch of sportiness to the package.

Like all other Royal Enfields, there aren’t any LEDs. The video, though, shows the Hunter 350’s twin-pod instrument cluster -- one for speed and odometer and the other probably for RE’s tripper navigation.

The underpinnings are pretty basic too, comprising a gaited telescopic fork at the front and twin shock absorbers at the rear. Single disc brakes are present on both ends, and we hope dual-channel ABS is offered as standard.

These aside, the real highlight of this video has to be the Hunter 350’s highway-touring capabilities. The videomaker claims that the test mule was effortlessly doing triple-digit speeds. And this doesn’t really come as a surprise, considering the Hunter 350 will use the same 350cc motor as the Meteor 350, which manages these speeds pretty easily. Expect the Hunter 350 to be lighter than its cruiser siblings, enhancing its performance.