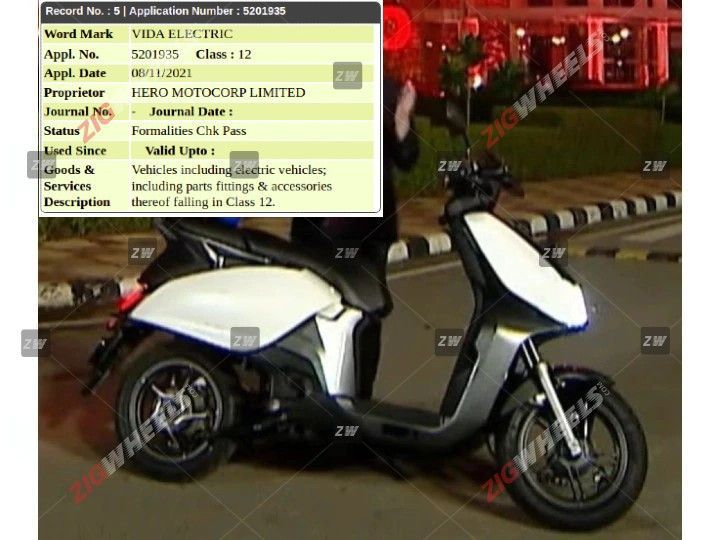 Hero MotoCorp has applied for the trademark of several names for its upcoming sub-brand dedicated to electric vehicles. The company has applied for the names: ‘Vida Electric’, ‘Vida EV’, ‘Vida Mobility’, ‘Vida MotoCorp’, ‘Vida Scooters’, and ‘Vida Motorcycles’. All of them have been applied on November 11, and ‘Formalities Chk Pass’, which means the application has been filed correctly, pending further inspection.

Now even though Hero Electric and Hero MotoCorp are run by the same family, the former exists as a standalone company. So, Hero MotoCorp will not be able to use that name for its upcoming EV sub-brand, and hence, the bikemaker seems to be experimenting with different names with the new ‘Vida’ moniker. The inclusion of Vida Motorcycles and Vida Scooters indicates Hero MotoCorp will be launching both electric bikes and electric scooters under the upcoming sub-brand. In fact, Hero recently announced that its first electric scooter will be launched in March 2022.

The upcoming Hero electric scooter will be manufactured at Hero MotoCorp’s plant in Chittoor, Andhra Pradesh. The manufacturing and testing of the battery pack will also be done at the same plant. You can read more about it in our report here. All said and done, expect Hero MotoCorp to make a formal announcement regarding its upcoming electric vehicle sub-brand soon.

In a related development, Hero MotoCorp announced its partnership with Gogoro back in April this year. Taking this into account, expect its upcoming Hero electric scooter to have a swappable battery pack. The Hero Group also has a stake in Ather Energy, and in August, Ather announced that it is willing to share its proprietary fast charging connector and charging network with other EV makers. The future definitely looks electric, don’t you think?