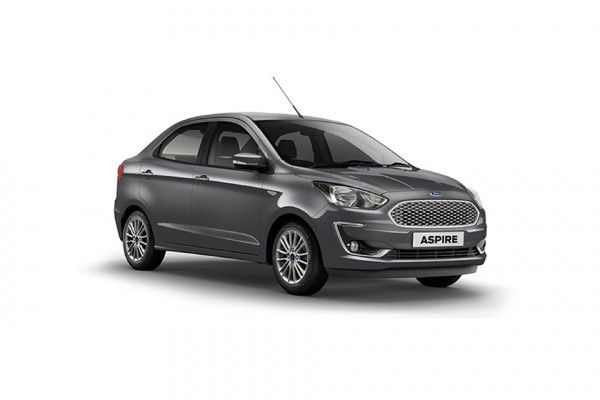 Ask your question from Aspire owners and experts
Your Question should contain at least 5 characters Submit Cancel
Available EMI Options
Rs. 15,562 per month @ 10.5% Apply for Loan

Ford has hiked prices of the Aspire by Rs 5000. This increase is consistent across all the variants. Also, the carmaker has discontinued the base-spec Ambiente. The Aspire now retails from Rs 7.24 lakh to Rs 8.69 lakh (ex-showroom). Its rivals include the Maruti Suzuki Dzire, Honda Amaze and upcoming Hyundai Aura.

Ford has ditched the old 1.2- and 1.5-litre petrol engines for a new pair. These engines too displace 1.2- and 1.5-litres, but they’re three-cylinder engines unlike the old four-cylinder units. But, we’re glad about this switch. Especially with the 1.2, because it has transformed the petrol Aspire into what’s an equally desirable package as the punchy 1.5-litre diesel. With 96PS of power and 120Nm of torque on tap, it ranks high in top trumps too. But the new gearbox ratios are tall and tend to sap some of the drive that we appreciated in the Freestyle. In our tests, the Aspire petrol-MT took 12.01 seconds to reach 100kmph, that’s on par with rivals such as the Maruti Dzire and the Honda Amaze. As far as efficiency goes, it returned 15.92kmpl inside the city and 19.52kmpl on the highway. The 1.5-litre petrol is borrowed from the EcoSport and makes a mouthwatering 123PS and 150Nm of torque. Instead of a dual-clutch automatic, it now gets a 6-speed torque converter setup. The 1.5-litre diesel soldiers on with 100PS of power and 215Nm of torque. But it gets a newer gearbox that’s far better than the old one. This engine is also super fuel efficient, and we’d recommend it over the petrol if highway usage is extensive.

Ford offers the Aspire in two variants: Titanium and Titanium Plus. Both the variants have petrol and diesel engine options. The base-spec Ambiente has been discontinued.

As far as facelifts go, the treatment dished out to the Aspire isn’t extensive per se. It gets new front and rear bumpers, a new grille and a set of bigger 15-inch alloy wheels. While we like the pattern on the gunmetal-finished grille, we really think the Aspire could’ve done with a snazzier set of wheels. The bigger and wider tyres are also welcome, but they sadly aren’t standard across the range. Also, the Aspire misses out on a bit of bling — projector headlamps, daytime running lamps are missing from the package.

Inside the cabin, there are two changes you’d pick on. For starters, there’s a touchscreen on the dash. That dated music system has been thankfully chucked in the bin. Second, you don’t get leather upholstery anymore. Also, small issues prevalent in the pre-facelift version continue to plague the Aspire. For example, the co-driver’s seat brushes against the centre console, there are no bottle holders in the rear doors and the central armrest doesn’t have cup holders either. In terms of space, there’s enough for a six-footer to sit behind his/her own driving position. But, headroom isn’t all that great, especially in the rear bench. In terms of features, you get a 6.5-inch touchscreen (lower variants get an 7-inch unit), automatic climate control, automatic headlamps and wipers, steering-mounted audio control and a bigger, updated multi-info display (MID). The top-spec Aspire is the only car in its class to offer side and curtain airbags, which bumps up the safety quotient. All other variants feature dual airbags. Anti-lock brakes with EBD and seatbelt reminders (for both front occupants) is offered as standard as well. Notably, the automatic also features ESP and hill hold.

Maruti Suzuki Dzire : The Maruti Dzire sits at the top of the compact sedan segment quite comfortably. The new generation has improved by leaps and bounds, and is among your best bets if you’re looking for a compact sedan.

Hyundai Xcent : Based on the Grand i10 hatchback, this compact sedan combines space and practicality of a larger car with the reliability and low cost of ownership associated with the brand. The Xcent is not as spacious as the competition but has one of the better-built interiors. The Xcent does not get a diesel automatic variant, unlike the Ameo or the Dzire.

Honda Amaze : : Honda’s second-generation Amaze brings a lot to the table. Plenty of features, a spacious cabin, a refined petrol engine and a fun diesel too. The CVT stands out in a sea of jerky AMTs. Add the allure of the Honda badge, and you’ve got a product that appeals to the head and the heart!

Volkswagen Ameo: The middle-child in Volkswagen’s lineup is exactly what you think it is. It’s a Polo with a boot. Pick it only if you need a diesel automatic or a bigger boot. For everything else, the Polo works just fine.

Tata Tigor : : The Tigor looks like a good overall package with decent equipment and frugal engines - though these are best used in the city. The JTP variant, on the other hand, caters to the budget-conscious enthusiast who would have had a hole burnt in their pockets earlier.

Filter By:
No results found
View All Variants

Q. Which is better, Ford Aspire or Kia Sonet?
Q. Which one is a better pick between Ford Aspire petrol manual and Tata Tigor xz+ manual?
Q. Is Ford going to shut down in India?
Q. Does Ford Aspire come with impact sensing door unlock?
Q. Which tyre size is best for Ford Aspire Titanium model?
Q. Is Ford Aspire diesel 2020 bs6 version contains 2 trip meters like A and B or single trip meter?
View More Questions
Q. At 9 lakh budget which car is best for value to buy Honda Amaze, Ford Aspire, Hyundai Venue or Tata Nexon?
Q. Which car is best between Ford Freestyle and Ford Aspire?
Q. Which is better option between Aspire Titanium and Freestyle Titanium as per as comfort, durability, clutch performance and average?
Q. Amaze or ford aspire which one is better View All Answers
Q. Ford aspire Vs Tata Altroz will be more decent?
Q. How is Ford Aspire, is it good to buy? What resale value can be expected for petrol or diesel variants?
View More Questions
All Aspire Questions and Answers

What is the price of Ford Aspire 2018 Top Variant?

What is the mileage of Ford Aspire 2018?

What are the top competitors of Ford Aspire 2018?

The top 3 competitors of Ford Aspire 2018 are Honda Amaze and Ford Freestyle.

What is the ground clearance of Ford Aspire 2018?

What are the best financing options for Ford Aspire 2018?