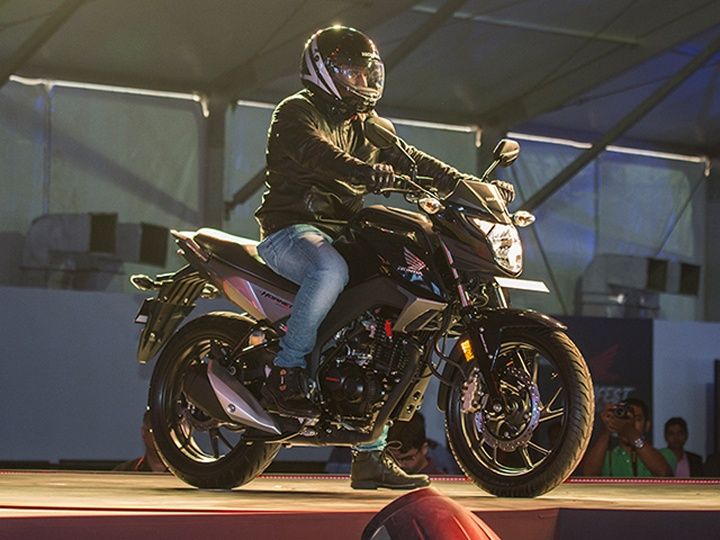 Overview:
Honda has had great success in the 150cc market in the form of the erstwhile Unicorn and the new Unicorn 160cc. But when it comes to premium 150cc offerings it has had a disappointing record to say the least. The Honda CB Dazzler and the CB Trigger failed to make an impact with respect to sales but it seems the Japanese two-wheeler giant plans to change it. For this purpose it has showcased the new Honda CB Hornet 160R.
Design and Features:
The new motorcycle has been designed to target youngsters and adopts an aggressive design philosophy. The trapezoidal shaped headlamp has been carried forward from the Unicorn 160 but gets LED pilot lamps. It seems that Honda designers have paid special attention the fuel tank as the chiselled lines and beefy tank shrouds adding a dose of muscle to the overall styling.The rear section of the CB Hornet 160R features a X-shaped LED tail light that makes the tail section look distinctive. The new Honda motorcycle also features multi spoke alloy wheels, split seats and an all digital console which is a straight lift from the Honda Unicorn 160. Switch gear quality is decent but the lack of engine kill switch is disappointing. Overall the Honda CB Hornet 160R is a striking looking motorcycle and design influences from the Honda CX-01 concept that was showcased at 2014 Auto Expo can be seen. 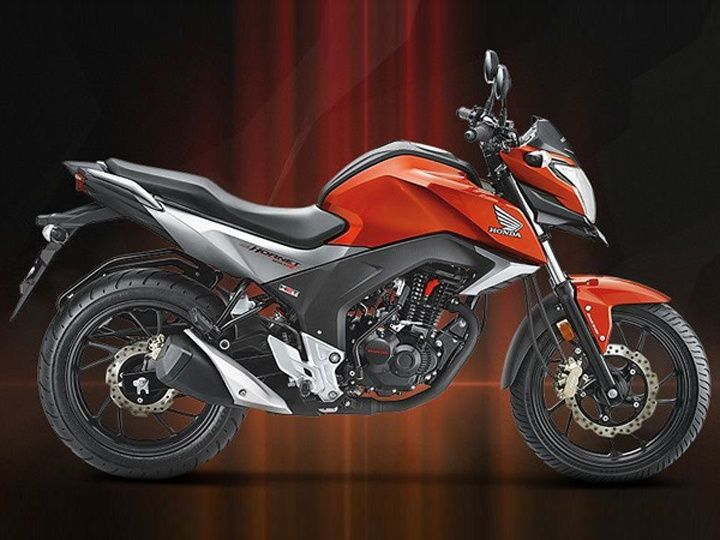 Engine:
Honda hasn’t revealed specifications of the new CB Hornet 160R. But expect it to be a straight lift from the Unicorn 160. The 162.7cc; air-cooled motor churns out 14.5PS of max power and peak torque rating of 14.6Nm. Power is transmitted to the rear wheel by a 5-speed gearbox. Going by the experience we had on the Unicorn 160, expect the new Honda CB Hornet 160R to have good performance. Power will be transmitted via a 5-speed gearbox. Instead of the heel-n-toe gear lever as seen on the Unicorn 160, the CB Hornet 160 will sport a single toe-shifter as it is a premium 150cc offering. The motorcycle will be equipped with the patented HET technology and having tested the Honda Unicorn 160 expect the CB Hornet 160R to have an overall mileage of around 45-50kmpl in real world conditions. The bike will share hardware like frame, brakes and suspension setup with the Unicorn 160.
Price & Rivals:
The Honda CB Hornet 160R will carry a price tag of around Rs 5,000 to 8,000 more than the Unicorn 160. Expect the new bike to be priced around Rs 78,000 to 83,000 (ex-showroom Delhi). Talking about competitors, the Honda CB Hornet 160R will square off against the Suzuki Gixxer, Yamaha FZ-S FI, Hero Xtreme Sports and Bajaj Pulsar AS150.
Read More
rvmp_n_gpopup

The 150cc segment can be seen as the stepping stone in terms of performance with respect to the Indian market. The 150cc motorcycles offer a great mix of performance, frugality and affordability. In the form of the Honda Unicorn and now the Unicorn 160, the Japanese two-wheeler giant has tasted great success. But when it comes to premium 150cc offerings, its track record is unimpressive in the form of the Honda CB Dazzler and later the CB Trigger which failed to make a mark in the sales chart. Also Watch: Honda CB Hornet 160R WalkAround Video 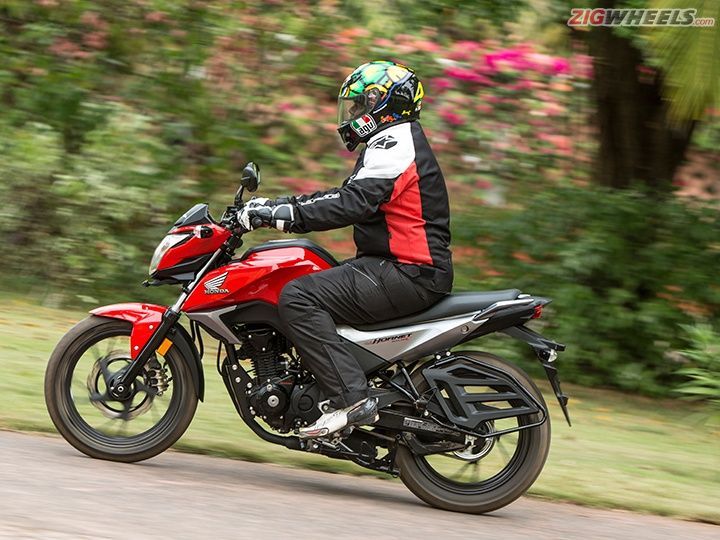 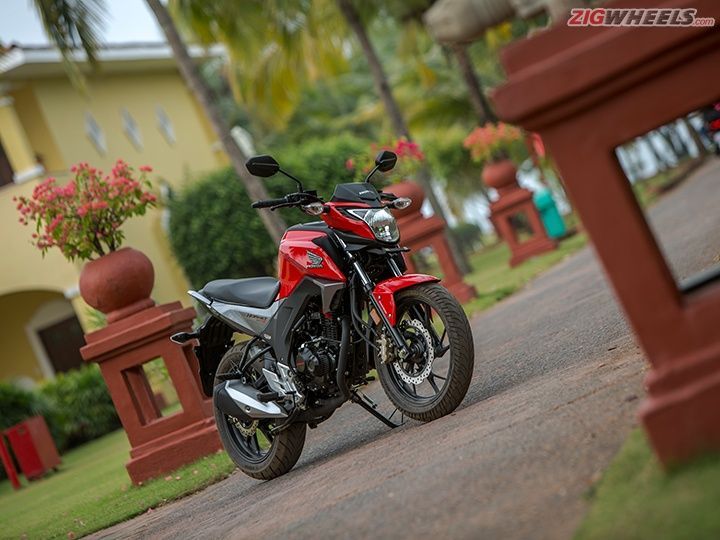 Buyers in the premium 150cc segment want an aggressively styled and modern looking motorcycle. And this is one area where the Dazzler and Trigger failed to impress. Honda seems to have understood this fact and we must say that the Honda CB Hornet 160R is a striking looking motorcycle. One is welcomed with a trapezoidal headlamp unit with twin pilot lamps neatly integrated into it, while the large tank and edgy fuel tank extensions give the motorcycle a sharp looking profile. The rear section is petite with split grab rails and the X-shaped LED tail lamp endows the Hornet 160 with a unique looking tail section. 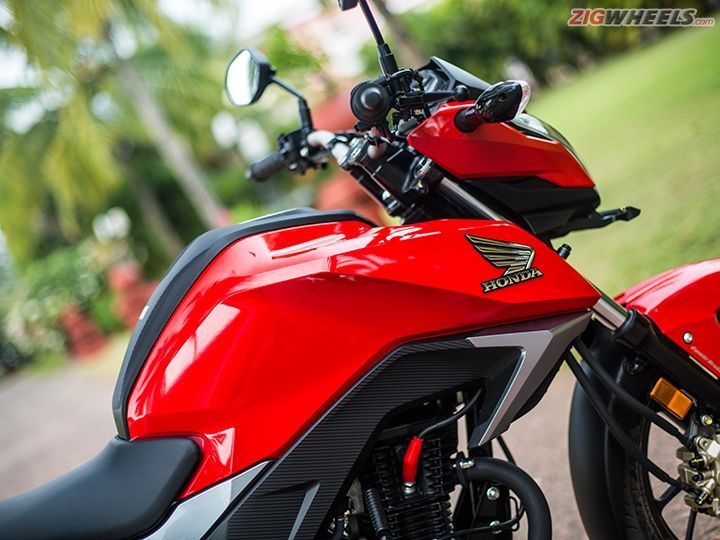 Other interesting bits on the new bike includes multi-spoke alloy wheels, stubby exhaust muffler and bare carbon finish on fuel tank and centre body panel. The all-digital console is a straight lift from the Unicorn 160 and a redesigned console would have been more welcome. Fit and finish is good but the switchgear feels a generation old and needs to be updated. Engine kill switch has been given a miss, which is unacceptable on a premium bike. We also didn't like the quality of the switchgear on the CB Hornet 160R and thought it could have been better. 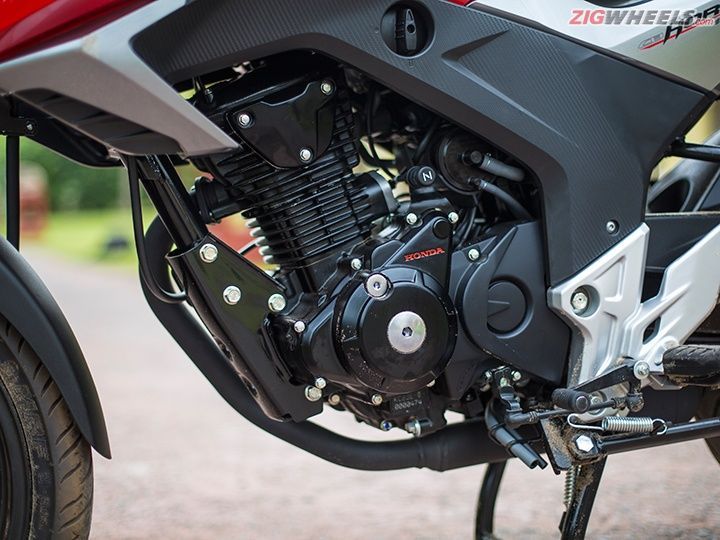 The engine used on the CB Hornet 160 is exactly the same unit as seen on the Unicorn 160. But the powerplant has been tweaked to extract more juice out of it. The 162.7cc air-cooled motor churns out 15.9PS of max power and peak torque rating of 14.8Nm. This makes the new 150cc motorcycle around 1.4PS and 0.2Nm of torque more than the Unicorn 160. Power is transmitted to the rear wheel by a 5-speed gearbox.

The engine has a high-revving nature and one needs to feed in the revs for the power band to kick in which is a trait similar to higher displacement Honda motors. Acceleration is good for a 150cc motorcycle but the CB Hornet 160R feels a bit strained above 90kmph with vibes kicking in through pegs and handlebar. In-gear acceleration is also decent which is helpful while overtaking on the highways. 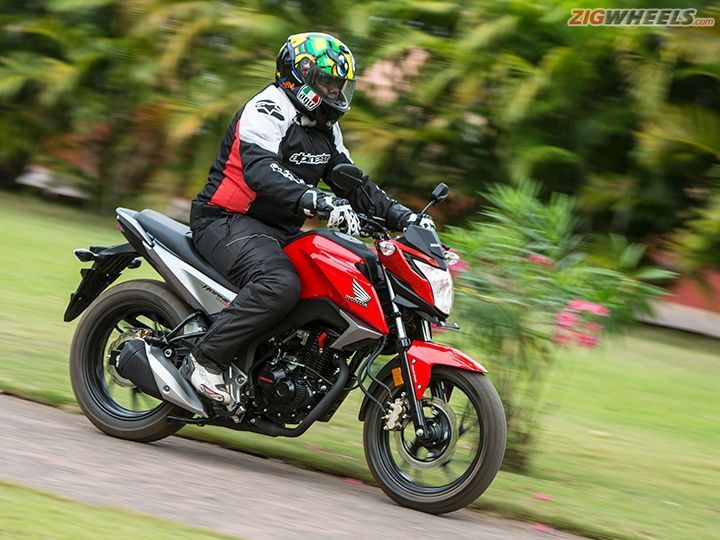 The 5-speed gearbox is notchy especially from 1st to 2nd gear which is similar trait to the Honda Unicorn 160. But the gear ratios have been well distributed specifically for riding in traffic. Honda hasn’t released fuel efficiency figures for the Hornet 160 and we couldn’t test it in Goa as it was a short ride, but going by our past experience with the Unicorn 160, it is safe to assume a mileage figure of around 45kmpl overall. Also Watch: Honda CB Hornet 160R WalkAround Video 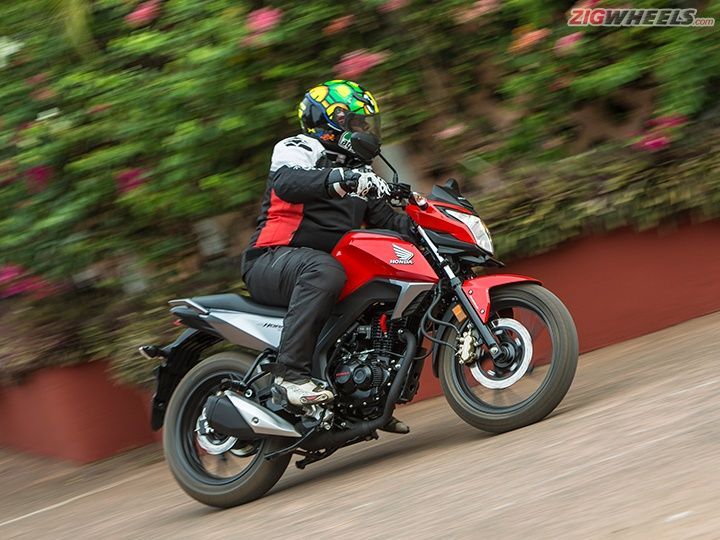 The Honda CB Hornet 160R employs a diamond-type frame as seen on the Unicorn 160. Handling of the motorcycle is impressive as it dives into corners with great enthusiasm. Improving the handling dynamics further is the 140mm section chunky rear tyre that aids the rider in increasing the lean angle of the motorcycle. 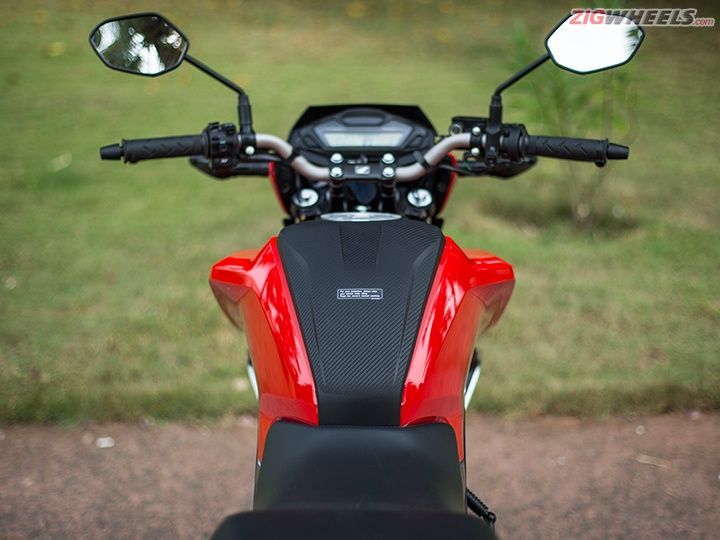 Riding posture on the bike is upright with the flat and wide handle bar feeling nice to hold, and you get a sensation of riding a higher displacement streetbike. The footpegs are mildly rear-set which gels well with the overall dynamics of the Hornet 160R and a toe only gear shifter has been provided. The seats feel a bit stiff and one cannot snugly hold the fuel tank which is a bit disappointing. The new Honda 150cc motorcycle employs telescopic front forks and monoshock unit at the back and the overall ride quality is good as it swallowed undulations and broken roads without any trouble. 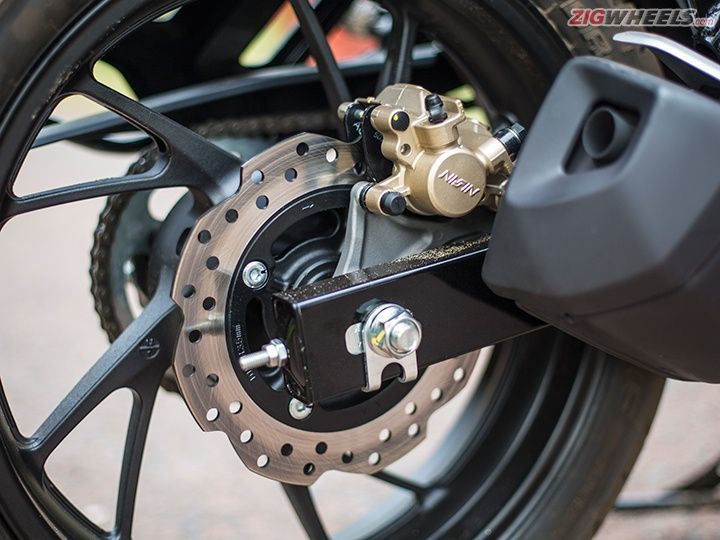 Braking is done by petal disc brakes (a first for any production Honda bike in India) at both ends and the bike we tested was the CBS version, and overall braking performance was decent. They provide good bite but better progression from the levers would have been welcome. 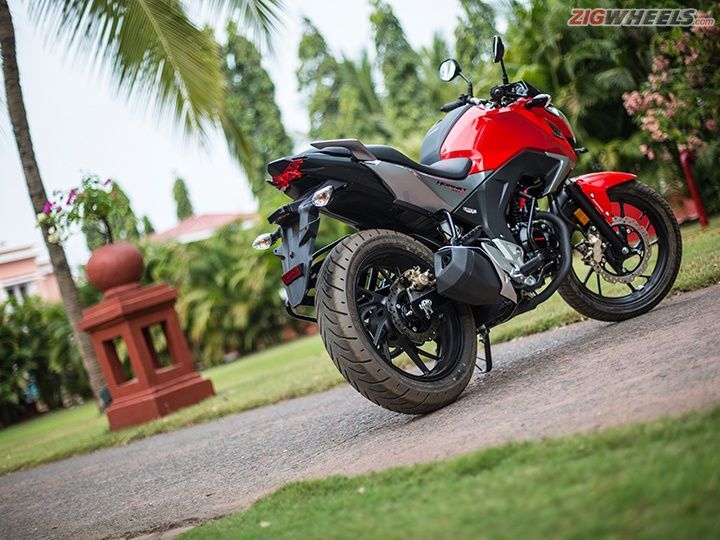 In the form of the CB Hornet 160R, Honda now finally has a competitive offering in the premium 150cc motorcycle segment. It looks the part with its sporty styling and chiselled lines making it a visually attractive bike. Performance of the motorcycle is also good with respect to its rivals and it offers decent fuel efficiency as well. But the current Rs 79, 900 (ex-showroom Delhi pricing for the non CBS variant) is on the higher side with respect to competition. It seems that Honda have got it right the third time around but whether the customers will give the Japanese bikemaker a third chance to success is something only time will tell. Also Watch: Honda CB Hornet 160R WalkAround Video

What is the expected price of Honda CB Hornet 160R?

What is the launch date of Honda CB Hornet 160R?

What are the top competitors of Honda CB Hornet 160R?