Does the KTM simply bridge the gap between the 390 Duke and 200 Duke? Or does it open up another avenue to performance motorcycling? 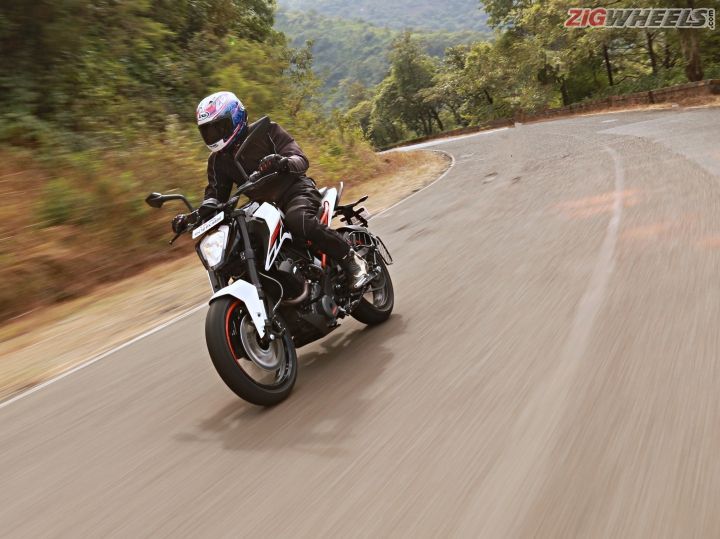 What if I told you the new KTM 250 Duke is as refined as a Japanese motorcycle? As incredulous as it may sound, the 250 Duke surprised us with its performance and the fact that it is so much easier to live with than the 200 Duke despite the higher power output. But does that mean the 250 Duke loses out on the traits that makes KTM bikes stand apart from the competition? We beg to differ.

Orange is the new black
You’d be forgiven to mistake the 250 Duke, at first glance, for the larger 390 Duke. While the previous generation 390 and 200 Duke shared the same bodywork, the new models have the 200 Duke carry the old bodywork and frame. The 250 Duke gets the new 390 Duke’s frame and bodywork, minus the all-LED headlamp. Instead, it gets a similar-shaped unit with a regular halogen setup lined with an inverted U-shaped DRL. Illumination might not be as good as an LED setup but it does give you a bright and wide spread.

It also misses out on the Duke 390’s colour TFT instrument panel. Instead, you get the 200 Duke’s monochrome LCD console. That's disappointing as the rpm bar is small and hard to read on the move, and moreover the 390 Duke’s TFT colour screen has really spoilt us. Rest of the switchgear, however, is carried over from the 200 Duke. It does not feel as tactile as, say, Kawasaki switchgear, but still retains a solid feel that seems built to last.

As you move back, the split trellis frame grabs your attention as does the sharp contoured tank in white. It also comes in bright KTM orange. The tail section neatly integrates a clear lens LED tail lamp. Overall, it looks as sharp as the new 390 Duke but has a slightly more mature air around it. The new 390 Duke looks brutish, the 250 Duke suave. The changes have it gain an additional 13kgs over the 200 Duke but then it also makes more power and torque.

Smooth operator
Powering the 250 Duke is a 248.8cc, liquid-cooled and fuel injected motor that essentially is a  downsized engine block from the 390 Duke, which makes 30PS and 24Nm. Thats 5PS and 5Nm over the 200 Duke, which feels enough. And honestly, peak figures is not what the motor is about. This one impresses with its performance and tractability. It does make power fairly higher up in the rev range, with its 30PS coming up at 9000rpm and 24Nm available at 7000rpm. It is not a buzzy or eager motor but rather feels like a Kawasaki engine, making good progress till 4000rpm and thereon starting to properly wake up and tapering off post 9500rpm. Power does not come in a gush, rather a smooth flow with a much stronger midrange than the 200 Duke.

But this motor does run fairly hot. Fifteen minutes of traffic running will have the temperature gauge on the LCD display in the higher zone. It does not, however, affect the rider that much. The hot air is well directed under and away from the rider and it is only when you are stuck in standstill traffic that will you feel the heat -- but it’s a small bother at best.

Gearing is a tad on the shorter side given the motor's penchant to make most of its power higher up. This is a tractable motor, taking 4.35 seconds for the 30-70kmph roll-on test in third gear and 6.09 seconds for going from 40 to 80kmph in fourth gear. The shorter gearing also allows the motor to run unstressed in traffic in as high as fourth gear at speeds upto 50kmph, making for a fuel efficiency of 41kmpl. On the highway, at speeds between 80-90kmph, it dropped to 35.66kmpl. A 13.5-litre fuel tank capacity should give you a theoretical highway range of around 480 kilometres on a tankful.

You also get a slipper clutch, which makes riding angry on hill roads seem like a calm and collected affair, with nary a hop from the rear wheel when downshifting hard. Shifts themselves are smooth and precise and with a light clutch actuation, makes it effortless to ride. On the highway, it makes decent progress till the 125kmph mark. Post that, it takes a lot of time to reach its top speed. We managed 131kmph (true speed) though we reckon it should cross 140kmph given time and a long stretch of tarmac. Wind blast is not much of an issue but then again you won't be hitting too much of a high speed with this.

Comfortable?
he 2017 Duke frame also gets a revised riding position thanks to new chassis geometry. Gone is the commited and uncomfortable riding posture, and in its place is a more upright stance. Seat height has increased by 20mm over the 200 Duke, to 830mm. The seat too is wider now and does not pose much of a problem for long rides. Another major upgrade is the new 43mm upside-down WP open cartridge forks and rear monoshock with separate gas and oil chambers for enhance cooling - picked up from the new 390 Duke. Ride has improved considerably and the 250 Duke just dismisses most bad road surfaces and potholes. It is still set up on the stiffer side but the rider is now better insulated from the road surface. Sharp edges and ridges too are taken care of without much of a bother to the rider. Pillion riders will rejoice at the extra comfort afforded by the longer and wider rear seat.

The stiffer setup and shorter wheelbase results in a more reactive KTM. Its 1357mm wheelbase is shorter than the 200 Duke’s 1366mm, which makes it almost as agile as the 390 Duke. A quick turning front end makes this quite lively, but it is also one which can catch a novice rider off. It is almost as capable as the 390 Duke, only held back by the MRF REVZ tyres it comes shod with. They get the job done but miss out on the outright grip that the faster wearing and more expensive Metzelers offer. It's not a bad trade off, even during hard braking, with the tyres gripping well and eliciting minimal drama.

Braking is similar to the 200 Duke’s setup. You get a 300mm front disc clamped to a radially mounted Bybre callipers while the rear gets a 230mm disc. It misses out on ABS. The Bybre brakes offer good feedback and a strong bite with plenty of feel from the brake lever. Under braking tests 100-0kmph takes 4.05 seconds taking 51.38 metres while 80-0kmph takes 3.62 seconds taking 33.95 metres.

The 250 Duke trades the KTM's rortiness for refinement, and we think, is all the better for it.  It makes a compelling prospect if you are looking for a premium, comfortable and dynamic runaround on a budget under Rs two lakh. If this was two years ago, you would be looking at the Honda CBR 250 R. It does have its quirks, like a difficult to read instrument console, and sharp handling traits that might bother a novice rider, but when it comes to the best you can buy in this price range, the KTM 250 Duke is there at the very top.