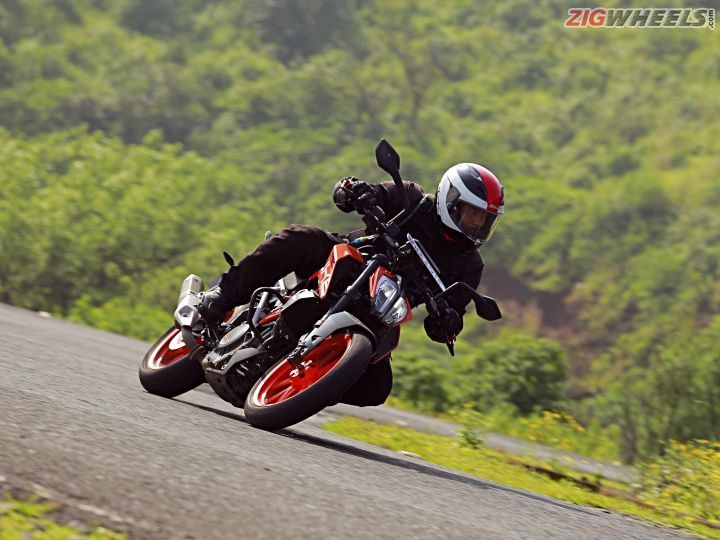 Since the first ride in March this year we’ve been desperately trying to get our hands on the new KTM 390 Duke to put some numbers behind those great feelings we got from the first ride. Unfortunately, KTM India refused to play ball, and so that bright orange and black beast you see in these pictures is actually my motorcycle bought in July. With a slightly hectic work schedule, it took a while before I could manage to break in the engine and get it serviced before putting it through a proper ZigWheels road test.

The new Duke just looks insane but then that’s more or less a given, considering that it’s spawned from the beastly 1290 Super Duke R. The new, super sharp bodywork really does set it apart from the first generation 390/200 Dukes. The DRLs and LED headlamps that distinguish it from its new 250cc sibling add even more oomph to the look. The completely redesigned side panels shroud a new metal petrol tank that now holds more fuel and the exposed rear subframe detracts from just a little visual weight in the rear section. If I had to fault something, then the only complaints would be that there is just a tad too much orange in the package for my taste, and the TFT instrument cluster looks a little slab-sided in comparison to the rest of the aerodynamically sound package.

Underneath the new flashy exterior, the 390 has a number of updates that have made quite a significant difference to the overall package. There’s the ride-by-wire system that’s been added primarily to deal with the new emission norms, new suspension front and rear and a larger front disc brake with sintered pads. The underslung exhaust has also been ditched for better emissions and lower decibels, and now in its place there is the more conventional side-slung exhaust that’s quieter and more throaty. The rear sprocket has shrunk from 45 to 44 teeth, giving a taller ratio that should boost efficiency and better the range from a tank of gas. There is also a larger air box that allows better breathing and further manages to bump up torque by 2Nm to 37Nm, but power stays the same at 43.5PS. Everything put together, there’s a gain of 5 kilograms over the outgoing 390.

This brings us to that brilliant TFT colour display. It really is eye catching and just adds to the experience of riding. The information on display is more than adequate and there is more available as you toggle through the screens with the controls on the left handlebar. That said, the shift-up warning, i.e. where the tachometer turns red and then flashes, is not quite as prominent as a dedicated shift light would be in daily upright riding, and it catches your attention only when you're crouched over.

I have to admit, I haven’t tried connecting a smartphone to the display and that’s down to something that I read in the owner's forum, where one member theorised that some of the problems people were facing with the electricals (headlight switching off, instrument cluster going blank and other little electrical gremlins) only started up after he connected his phone to the system. So, as a precaution, I have chosen to just steer away from doing that for now. Other owners I know have used it and have updated their software to the latest version and are facing no problems at all.

The ride-by-wire system has had the biggest impact in the way the new 390 behaves. This breaks the direct connection between the throttle and the injectors in favour of some clever software and a more measured fuel delivery that also promises better emissions. And the result is much smoother power delivery, an area where the old 390 Duke struggled. It’s now a much more amicable beast in the city, with none of the juddering at low speeds in higher gears. On one side this refinement does, ever so slightly, dilute some of that raw thrill that the old motorcycle had in bucketfuls. But on the flip side, that same harshness the old motorcycle dished out was a little polarising and the new Duke should now appeal to a much larger audience.

Out on the open road with the motor ticking over 4000rpm, it’s still very much the hooligan we want it to be. Whack the throttle open and it will hit the 100kmph mark in 5.98s, just a few tenths slower than the older bike. That’s down to the the taller gearing and increased weight, but in our books it's a small price to pay for the improved refinement.

The other change that also makes a big impression is the new suspension, front and rear. The new open cartridge forks are much more supple over the small stuff that used to unsettle the older Duke and still firm enough to have all the handling prowess that you crave around a set of twisties. In fact, the one thing that hasn’t changed much is the Duke’s appetite for corners. All the domestication we’ve spoken of has only affected the motorcycle when riding upright.

The rear shock is also new with new spring and damping rates and it definitely feels a little stiffer than the old setup and better matched to the front fork. With my hefty weight, I feel it’s more supportive around corners than the previous unit that tended to squat a little when pushed hard. As soon as you chuck the Duke into its first corner, you’ll find a smile growing inside your helmet. It still turns in beautifully, is happy to change line and doesn’t drop its haunches on the way out.

One complaint that a number of 390 owners had was the bite and ‘feel’ from the front brakes which they found lacking. With the new 320mm rotors paired with sintered brake pads and a new master cylinder, the braking has also been transformed. This new setup has sharpened things up quite a bit with great feel and bite at the lever, and this too just builds confidence and allows you to push the new 390 harder than before.

On our efficiency runs the Duke returned 25.7kmpl in the city and 28.5kmpl out on the highway. Combined with the larger 13-litre tank, it gives you a theoretical range of well over 300 kilometers for each tankful, and even if that drops down to 250-270 kilometres in the real world, that’s still a decent range for touring and a marked improvement over what the old 390 Duke could realistically manage.

It’s probably true that in terms of outright performance numbers the new 390 Duke may actually be just a few tenths slower than the outgoing model. Its wild nature is intact, but the 390 is genuinely more civil and obviously better at tackling the urban environment. The confidence that the new package inspires means that when it’s time to get a move on, the Duke is an even more potent package. And if a motorcycle eggs you on to ride it more often, for longer, and push harder like the 390 Duke does, then, in our books, it’s a lot more than just ready to race.