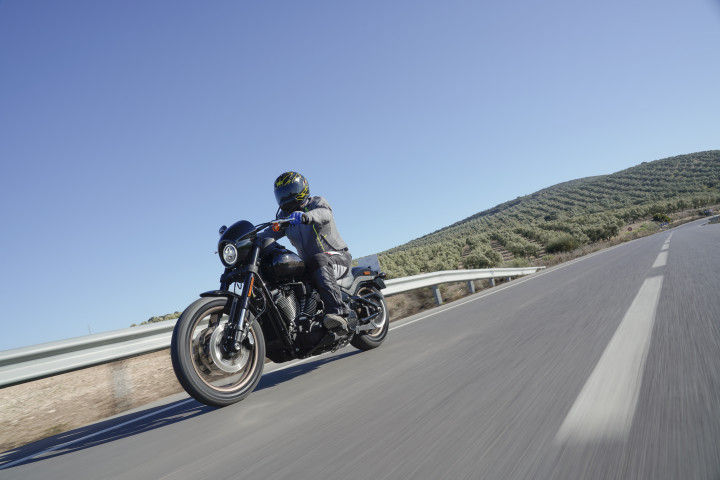 An icon in its own right, the Harley-Davidson Low Rider has been a fan favourite of Americans. It embodies the classic cruiser styling that fans have adored for ages. Even though it was part of the erstwhile Dyna family, the Low Rider transitioned on to the modern Softail range. And after receiving a positive global response, Harley thought it had to do something special to honour the icon. Thus was born the Low Rider S.

From afar, it might look like it is just a blacked out version of the Low Rider with almost no bling to be found on the bike. Look closely though and you will find a different front end and even the numbers ‘114’ stickered on to the exposed air-box. But is that really enough to make the Low Rider S that much more special?

Gimme More Torque!
The ‘114’ sticker means Harley has given the Low Rider S the Milwaukee-Eight 114 cubic-inch engine; the largest one that you can spec on a Softail. This 1,868cc V-twin engine pumps out 161Nm of torque at 3000rpm. By the time this cruiser goes on sale (April) in India, the engine will be updated to meet BS6 emission norms, which means it will have a lower peak torque rating of 155Nm. But that’s still 11Nm more than the smaller 107ci engine of the Low Rider.

Most of this torque kicks in from revs as low as 1000rpm, not shocking considering that the motor usually idles at 800-850rpm. Out on the fast Spanish highways, the engine got up to the 120kmph quite easily, the tacho needle hovering just above the 2500rpm mark. Twist the throttle further and it blasts past the 160kmph mark in no time.

It isn’t just the dollops of torque that this engine churns out that impresses you the most. It is the calmness of it all. The Milwaukee-Eight engines, with two counterbalancers, are among the smoothest motors produced by the American brand. But in case you were worried that the “Harley” experience may have been numbed by the new motor, you would be glad to know that the characteristic V-twin vibes are present. These mellow sensations are felt at medium revs at the bars and the seat (obviously, given its proximity to the latter of the two large cylinder heads).

Gear shifts are positive and swift but not slick. Each shift is accompanied by a characteristic clunk or thud. The clutch effort required is a bit much, which could prove to be a pain within city limits, especially in stop-go city traffic situations.

It was a bit chilly in Spain during our ride. Hence, it was hard to judge the engine’s heat management. If the 107ci engine is anything to go by, the Low Rider S will not burn your legs to a crisp.

Sharper Handling
Harley introduced the brilliant new Softail chassis for the 2018 model lineup. It was lighter, stiffer and was dynamically more capable. The Low Rider S retains the frame as well as the swingarm and preload-adjustable monoshock from the standard Low Rider. But Harley has tweaked the front end. This being the S model, Harley has sharpened the rake angle from 30-degrees to 28-degrees. As a result, the wheelbase now stands at 1615mm, shorter by 15mm. It also gets the stiff front USD fork from the Fat Bob, amplifying its performance credentials. The alloy wheel setup of a large and slim 19-inch front and a small wide 16-inch rear is unchanged.

Before riding the bike, we were told to proceed with caution on the slightly marbely twisty roads of Malaga. Paying heed to the warning, we set forth. The small changes made to the bike are evident while riding it. It was a hoot trying to stick to our pacey lead Harley rider in the twisty section. The bike is eager to go hunting down corners, even more so than the standard Low Rider. The shortening of the wheelbase has not affected the mid-corner stability of the bike, remaining planted all throughout the bend.

As you gas out of the corner, the extra torque from the 114 engine lurches this 300kg+ motorcycle towards the next corner with vigour. The rear wheel did momentarily break traction a few times when gassed hard. Blame the road surface rather than the Michelin Scorcher rubber. As far as ride quality goes, we would have to reserve our judgment until we get our hands on the bike in India; the smooth Spanish roads rarely bothered this Harley.

To bring this heavyweight to a grinding halt, Harley has fitted an additional rotor on the front wheel. You get a four-pot caliper on each one of these discs while the rear disc has a twin-piston floating caliper. Stopping power is fierce, with the Low Rider S managing to shed speed rapidly. Our only qualm with the brakes is that it could do with a bit more feedback at the lever. Dual-channel ABS comes as standard.

Tuck That Gut In
Not only did Harley change the steering geometry and the front suspension unit but also changed the handlebar of the bike. Gone are the ‘Buck-horn’ bars. Instead, you get a wide and chunky moto-bar which is mounted on tall 4-inch risers. The seat height has gone up by 10mm, and now stands at 690mm. The ground clearance is a lowly 120mm, 10mm lower than the Low Rider. But heck, it’s called a ‘Low Rider’ for a reason. The pegs are in the same mid-set position as before.

Personally, this knees-up posture is not my cup of tea. Add to that, the fair bit of reach to get to the bars made it a bit strenuous for me. This riding posture is better suited for lean riders. However, given that typical Harley riders are known to have a paunch like yours truly, it might not be as comfortable an experience as you would expect from a Harley.

Inspires Anarchy
Hollywood has elevated many Harleys to icons. Remember good ol’ Arnie jumping his Fat Boy in the Terminator series, or Captain America using his WLA Liberator to fight off Hydra in the First Avenger, or Black Widow chasing down Ultron’s truck on the LiveWire? The Low Rider too was immortalised, albeit on the television screen with a show revolving around the motorcycle gangs of America -- the Sons Of Anarchy.

The Low Rider S takes design inspirations from the Harleys used on this show. The blacked-out look is a typical trait of the bikes used by the SAMCRO (Sons of Anarchy Motorcycle Club, Redwood Original) in the series. The bronzed aluminium alloy rims bring out the bareknuckle vibe of the bike.

The single pod LED headlight is surrounded by a round black bikini fairing, which has been added on the Low Rider S. In fact, even the LED tail light has a light smoke finished cover. In the vast accessories catalogue of Harley-Davidson, you could also accessorize your Low Rider S with smoked lenses for the LED turn indicators to complete the dark look. There is a silver colour too, but that doesn’t really go well with the brutish vibe of the bike.

There are two vertically-stacked round info panels mounted centrally on the large 18.9-litre fuel tank. The top one is an analogue speedometer with a digital inset relaying information such as gear position, fuel level, a trip meter, an odometer and range indicator. The second round pod is an analogue tachometer that's pretty hard to read as you have to considerably lower your vision to check out the revs.

Verdict
Does the Low Rider S feel a bit special? The Low Rider might have been uber cool but the S looks like a bad-ass. But in a country like India, where everybody is obsessed with flashy and bling items, the Low Rider S’ understatedness might not work in its favour. The low ground clearance is a cause for concern on Indian roads too, but we hope that with a name like ‘Low Rider S’, buyers know what they’re getting themselves into. With that in mind, if you want to buy a performance-oriented Harley-Davidson in India now, get the Fat Bob. It is so much more involving and fun to ride than the Low Rider S. However, the BS4 stocks of the Fat Bob are running dry. Come April 1, Harley India will take the BS4 Fat Bob off the counter and we might have to wait quite a while before a Euro 5/BS6 version shows up.

The current Softail family of six will be chopped down to a mere two, the Low Rider and the Fat Boy being the lone survivors. With an expected price tag of Rs 17.5 lakh (ex-showroom India), the Low Rider S will be introduced in April and become the third member of this family. Of the remaining trio, if you want the most dynamic Softail, then the Low Rider S will become your only choice. Which is still ok in our books as the 114ci engine is just sweet. And for some weekend fun, it does the job well. The only thing you might need to do is get in better shape. That might just help you enjoy it a bit more.