The Niken is by far the most advanced, the most unique ‘motorcycle’ Yamaha has ever built. The cherry on top? It doesn’t sacrifice functionality in its quest for uniqueness 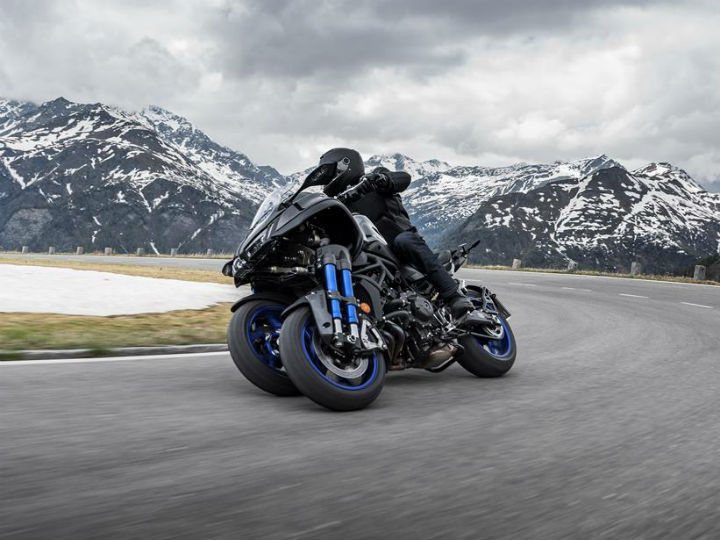 Yamaha wowed us when it unveiled the Niken three-wheeled motorcycle back at the 2017 Tokyo Motor Show. “Niken” is Japanese for “two swords” and boy does it look the part with its unique twin front wheel setup! The wheels are even capable of leaning like a normal two-wheeler, so the Niken really made us wonder: why three wheels when two will suffice? We got to do some digging about the whole design philosophy and it seems to have convinced us that the Niken is not only unique but offers its own set of advantages over a conventional motorcycle. Here’s what makes it tick:

Leans on the Leaning Multi-Wheel technology:

The Yamaha Niken revolves around a core concept called ‘Leaning Multi-Wheel’ or LMW technology. This isn’t the first time Yamaha has used this tech on a two-wheeler. It was earlier implemented on the Tricity, a scooter with two tilting wheels up front.

In the Niken, Yamaha has further evolved the Tricity’s steering mechanism by implementing what’s called Ackermann steering geometry. In a conventional setup, there are two front wheels that are capable of turning, connected to a frame which has a rigid rear wheel(s) on the other end. Now imagine there’s a centre point around which the vehicle turns. When each of the front wheels turn with the same angle, the radius traced by each front wheel will be different as they are further apart from each other. This results in the tyres slipping while cornering. So Ackerman steering geometry consists of a set of linkages which ensures that when the vehicle turns, the wheels on the inside have a greater angle of turn to compensate for the extra distance the outer wheel travels for its set angle.

So with this setup coupled with the parallelogram steering link ensures the front end feels as natural as possible. In fact, it offers lean angles up to 45 degrees. Moreover, the 410mm track remains constant even when it leans, thereby ensuring you have plenty of grip even when you begin to scrape the pegs on the tarmac.

The complex steering system is linked to a pair of inverted 41mm forks on each wheel. The fork leg on the leading side is actually meant only for changing directions. The trailing fork leg is the actual suspension, with about 110mm travel, and it offers adjustability in the form of rebound and compression settings. Yamaha has made sure the mass is as centralised as possible, so the rear-linked almost-horizontal monoshock is located just below the seat. It offers full adjustability, with rebound, compression and tool-less preload adjustment.

The bike is built on a new hybrid frame that consists of a cast steel steering head linked to a cast aluminium swingarm pivot via steel tubes. The aluminium swingarm is 15mm longer than the MT-09’s unit, for added stability. Yamaha says with the rider, the weight distribution is 50-50.

The twin front wheels are actually small 15-inch units wrapped with meaty 120-section radial tyres up front while the rear is a larger 17-inch alloy shod with a fat 190-section rubber. The Bridgestone Battlax Adventure tyres are V-rated (designed for speeds up to around 240kmph) and are designed specifically for leaning wheel vehicles.

The Yamaha Niken employs an MT-09 streetfighter-derived 847cc inline-three liquid-cooled engine, churning out 115PS at 10,000rpm and 87.5Nm at 8500rpm. The engine is counterbalanced for better refinement and the 6-speed transmission gets an assist and slipper clutch, along with a quickshifter as standard. That said, the quickshifter allows only for clutchless upshifts.

The engine is reined in by ride-by-wire throttle. There are three riding modes: Standard Mode, ‘A’ Mode and ‘B’ Mode. With two wheels up front and one driving wheel at the rear, there’s always risk of losing traction at the rear wheel. But fret not, as the Niken gets a two-mode adjustable traction control system. You can also turn it off if you want to.

The motorcycle comes to a halt using twin 298mm discs with radial calipers up front and a 282mm disc at the rear. As expected, Yamaha has provided dual-channel ABS as standard. Theoretically, the twin discs coupled with the twin-wheel setup should offer strong stopping power despite the discs being small. Touring enthusiasts would be happy to know that the bike gets an electronic cruise control as standard. This coupled with the large 18-litre fuel tank (claimed to offer about 300km range) should keep mile-munchers satisfied.

Popularity in the virtual world:

The Yamaha Niken was recently introduced officially in an online multiplayer shooter video game: PlayerUnknown’s Battlegrounds. Along with the Niken, the T7 Concept ADV was also brought in. You can read all about it here.

Death Stranding is another game which uses a similar three-wheeled motorcycle. While it may not exactly be the Yamaha Niken, it surely seems to be inspired by it. The fictional motorcycle is a lot more advanced than the real one, with electric motors powering both the front and the rear wheels. It even comes with a highly advanced wireless quick-charging system.