Yamaha India, Can We Please Get This Tenere? 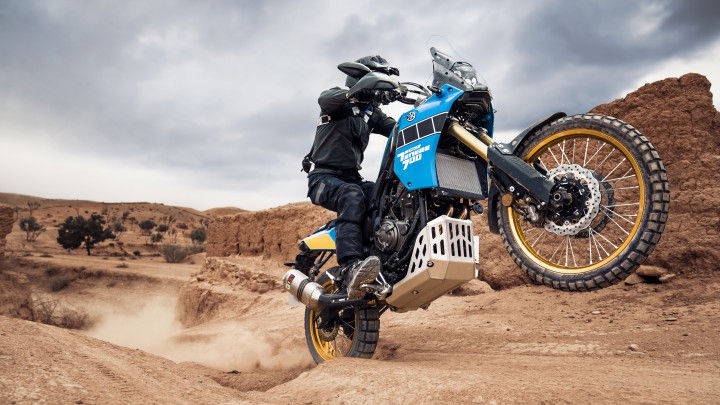 Yamaha had been playing around with the idea of a middleweight adventure motorcycle for years before launching the Tenere 700 at EICMA 2018. The Tenere 700 has quickly gone on to establish itself as one of the most popular ADV models in Europe, with Yamaha claiming to have sold 8,000 units of the bike so far. While it is not as powerful as other names in the business (Tigers, Africa Twins, Multistradas and GS-es) it is equally capable. Yamaha has now decided to take a step further on to the hardcore side with the Tenere 700 Rally edition.

The Tenere 700 Rally edition only comes in this iconic blue and yellow livery that was found on the 1979 Yamaha XT 500 Dakar rally winner. The golden-tinge on the USD fork sleeves and the yellow wheels just add to the wowness of the design.

FUN FACT: Yamaha Is The Second-most Successful Manufacturer In Dakar History
Cyril Neuve won the inaugural two editions on the Yamaha XT 500 and the Japanese bikemaker went on to win seven more titles. In fact, its 850T has racked up seven Dakar titles and the only bike that has bettered this record is the KTM 450 Rally with nine wins to its name.

Aside from the paint job, the Rally edition receives a taller ‘Rally’ seat, special rubberised thigh grips, better handlebar grips and more durable crash protection. The Rally seat makes sure that your bottom is perched 20mm higher, which at 895mm (gulp!) is daunting to say the least. The crash protection bits include a metal skid-plate made from 4mm thick aluminium, an aluminium radiator guard, and laser-cut aluminium chain guard. The new LED turn indicators are also new for the Rally edition.

And as a cherry on top, Yamaha is kitting the Rally edition with a specialised Akrapovic slip-on exhaust that is street legal. There is no extra horsepower and torque benefits from this Akra system, serving mainly an aural purpose.

The Tenere 700 continues to be powered by the 698cc CP2 engine that is also found on the MT-07 naked. The engine puts out 73.42PS and 68Nm, which is modest for its engine capacity. What should entice you is that it gets adjustable long-travel suspension at both ends, 21-/18-inch spoke rims and knobby rubber, all of which should make it one hell of an off-roader.

Yamaha India has shown very little inclination to bring this ADV to India, which is quite a shame. But if it does, it will definitely find a lot of takers, especially this edition.