Slated for launch later this year, the 7-seater Harrier will rival the Mahindra XUV500 and the upcoming 7-seater version of the MG Hector 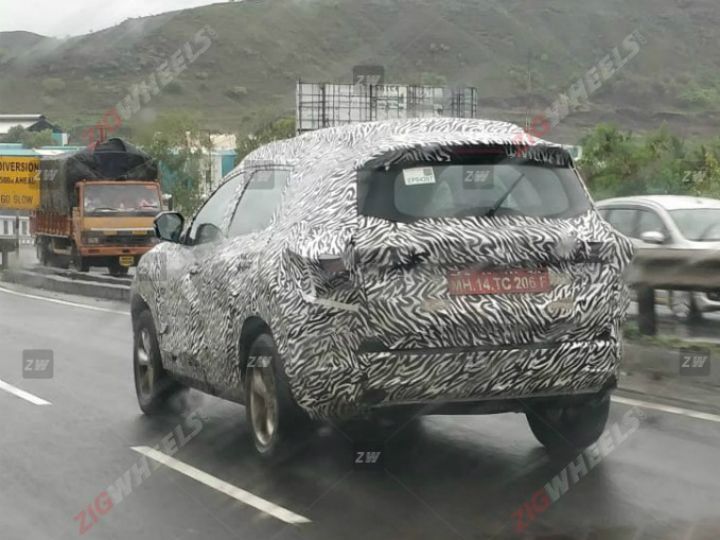 The Tata Harrier has grown in popularity thanks to its immense road presence and modern design. It ticks all the boxes and packs all the necessary attributes to go up against its 5-seater rivals. But, where it falls short is when you bring the XUV500 into the big picture. The lack of third-row seating puts it at a disadvantage, especially when MG is also readying a 7-seater version of the Hector. Tata also took note of this way before and the Harrier 7-seater is right on track as it was spotted testing yet again.

The SUV will most likely get a similar front end to the Harrier. Major differences will be focussed towards the rear and apart from having more seats, the Harrier 7-seater will also get different styling for the rear section. The test mule spotted this time was shod with bigger wheels and tyres and also had a bulge in its roof, which was not present in the test mule spotted earlier.  It is also likely to get a new tail lamp and bumper design along with a longer rear quarter glass, with a more upright stance. A standard 5-seater Harrier was also spotted along with the prototype and going by the fact that the SUV was loaded with occupants, we can safely assume that it was being load tested or benchmarked against the Harrier.

The Harrier’s OMEGA-ARC platform will underpin the 7-seater version, but it will be longer by 63mm (4661mm) and taller by 80mm (1786mm). The Fiat-sourced 2.0-litre diesel engine, meanwhile, is expected to make around 170PS and  350Nm of torque. The engine will come mated to a 6-speed manual and we can also expect a 6-speed torque converter. The new automatic gearbox is also most likely to be offered in the Harrier at a later stage. It will also come with all the goodies featured in the Harrier like the 8.8-inch touchscreen infotainment with Apple CarPlay and Android Auto, a 9-speaker JBL audio system, a 7-inch colour MID and more.

The Harrier 7-seater was first showcased at this year’s Geneva Motor Show. Even though it was called the Buzzard then, it is unlikely to carry that name when it is launched here. This is the second time the SUV was spotted testing, suggesting that the launch is on track and the SUV will reach dealerships by later this year. And for the big question, expect it to attract a premium of around Rs 1 lakh over the 5-seater version, which retails for Rs 12.99 lakh to Rs 16.75 lakh for the recently launched dual-tone XZ variant (ex-showroom Delhi).