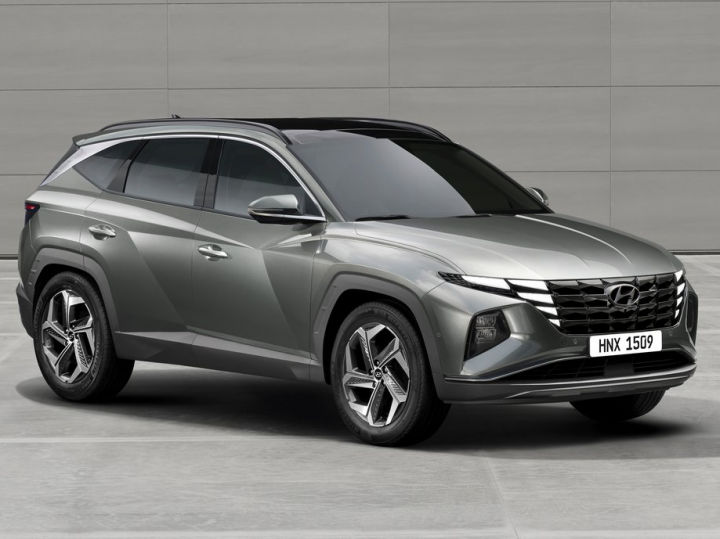 After plenty of teasers and announcements, Hyundai has unveiled the 2021 Tucson. Hyundai’s newest kid on the block features a more swoopier design, modern interiors, added features, and a clean plug-in hybrid powertrain. Here’s all you need to know about the fourth-gen Hyundai Tucson:

It is based on the Vision-T concept that was displayed at the 2019 Los Angeles Auto Show. The Tucson will be offered in two wheelbase options: a short wheelbase and an extended long wheelbase, depending on the market. We’re also happy to report that the production-spec model retains most of the design elements from the concept.

The next-gen Tucson follows Hyundai’s ‘Parametric Dynamic’ design language, which is an evolution of its Sensuous Sportiness design language. The slatted front-grille along with vertically stacked DRLs is a straight lift from the concept and you also get split LED headlamps, which are found in recent Hyundai SUVs. Plenty of sharp creases and character lines dominate the Tucson’s profile while the squared-out wheel arches are nicely filled by large dual-tone alloy wheels. The rear-end of the Tucson is also interesting with connected LED tail lamps that mimic a canine teeth.

The Tucson’s interior design is modern with a touch-control based central console. The tablet-style instrument display looks similar to the next-gen S-Class while the steering wheel looks similar to the Creta. We also particularly like the wrap-around dash layout with the faux AC vents that look similar to Audis.

As with any Hyundai cars, you get loads of features in the new Tucson. Highlights include connected car tech, a 10.25-inch touchscreen infotainment system, wireless Apple CarPlay and Android Auto, a Bose sound system, an air purifier, a sunroof, and voice command-based feature activation. You also get party tricks like Hyundai’s digital key, which allows you to open the car via an app on your smartphone.

The new Hyundai Tucson is powered by two engine options: a  2.5-litre petrol engine and a 1.6-litre turbo-petrol plug-in hybrid. The 2.5-litre petrol develops 190PS of power and 247Nm of torque (estimated figures). It comes paired to an 8-speed automatic transmission.

The plug-in hybrid, on the other hand, develops a combined output of 230PS/350Nm (petrol engine develops an estimated 180PS/264Nm). The Tucson drives all four wheels and gets both drive modes and traction modes similar to the India-spec Hyundai Creta.

The next-gen Hyundai Tucson will go on sale in Korea this month and we expect it to reach India around 2022. There’s also a sportier N-Line variant cooking up and we hope that comes to India as well. Prices are likely to start around the Rs 23-lakh mark, putting it in the ballpark of Jeep’s Compass, Skoda Karoq, and the upcoming facelifted VW Tiguan.