Honda Motorcycle & Scooter India Pvt. Ltd. (HMSI) has invested more than Rs. 1000 crore at the 2nd plant and doubled the annual production capacity of this plant to 1.2 million units 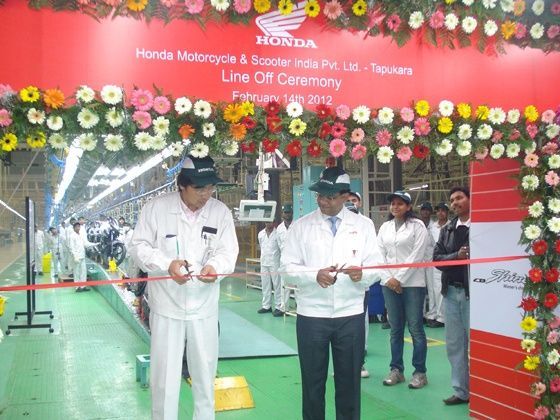 The growing demand for Honda’s motorcycles and scooters has encouraged HMSI to chalk out an aggressive expansion strategy for its production operations here in India, something that gained tremendous impetus when the company inaugurated its second manufacturing facility at Tapukara, Rajasthan in 2010.
Having successfully completed its first cycle of production of 600,000 units at Tapukara last year, HMSI recently announced the start of its second phase of production operations at same plant. However for the second phase HMSI has invested more than Rs. 1000 crore and more so it has doubled the annual production capacity of this plant to 1.2 million units.
So far, HMSI had restricted the production of its scooters only to its Manesar plant, but the newly inaugurated second assembly line at Tapukara will be flexible for production of both Honda’s scooter and motorcycle models, which will include the Activa, CB Twister and CB Shine. For its second phase the Tapukara plant has generated over 3,500 associates.

Speaking on the occasion, Mr.NK Rattan, Vice President, Sales and Marketing, said “The plant initially started the operations on July 11, 2011 with initial annual production capacity of 0.6 Million units. Further to meet growing demand of customer, 2nd phase with 0.6 million units capacity is started today making the total capacity to 1.2 million. With this, we shall be able to service our customers of Activa and CB Shine in more speedily manner”.
The company has always laid a great deal of emphasis on going the green way when it comes to its manufacturing processes, and at the new assembly line at Tapukara HMSI will be utilizing production technologies refined at the first plant, while employing more advanced automation and other measures to increase the operating efficiency at this plant. Measures such as rain water utilization & waste water recycling have also been taken into consideration.
HMSI plans to touch a total annual capacity of 4 million units in the coming years, a dream that could be made into a reality once the company’s third plant at Bangalore area becomes fully operational in the first half of 2013, with annual production capacity of 1.2 million units.