Hero’s hotly-anticipated motorcycles, the XPulse 200 and the 200T, are finally here! And here’s a closer look at the two bikes 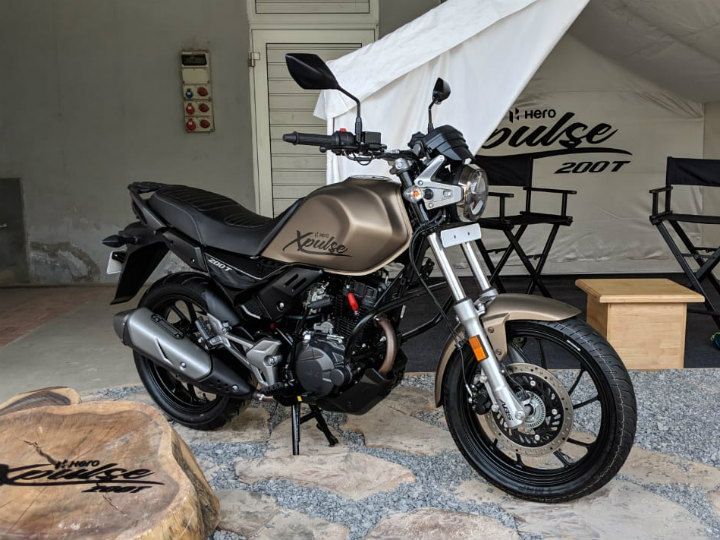 After months of waiting, Hero has finally launched the XPulse 200 and the XPulse 200T in India. And what is even more exciting is the fact that Hero has nailed it with the price. While the carb variant of the XPulse 200 is priced at Rs 97,000 (Fi variant is priced at Rs 1.05 lakh), the 200T will cost you Rs 94,000 (both prices are ex-showroom Delhi). Quite tempting, right? We have already ridden both the motorcycles on and off-the-road, but we can’t share our opinions until tomorrow. However, what we can do is give you a detailed look at both motorcycles from the launch event.

As you can make out from the setting, the XPulse 200 is the off-road capable version of the two.

To cement its mud-plugging credentials, the XPulse 200 gets a raised beak, knuckle guards and a small windscreen.

To make sure that the XPulse 200 can handle any kind of terrain, Hero has equipped it with spoke wheels (21-inch up front and 18-inch at the rear) shod with dual-purpose Ceat Gripp tyres.

It gets long-travel suspension with 190mm of travel at the front and a gas-charged 10-step preload adjustable monoshock with 170mm of wheel travel at the rear.

Now you don’t have to bring the map with you if you are lost during trail riding. That’s because the XPulse 200 comes with a digital instrument cluster with a Bluetooth-compatible turn-by-turn navigation system.

The fuel tank may look petite in this image, but it can hold 13-litres of fuel!

The XPulse 200 comes with an aluminium bash plate to make sure that the bike’s underbelly isn’t damaged during off-road shenanigans.

While the bike looks imposing with those long-travel forks, it actually isn't. The seat is just 825mm high so riders can easily swing their leg over the bike.

Powering this entry-level adventure motorcycle is a 199.6cc air-cooled engine that generates 18.4PS of power and 17.1Nm of torque, mated to a 5-speed gearbox.

If you are not a big fan of this matte gold paint option, then there are other paint options you can choose from: matte black, glossy black and glossy red.

As the XPulse 200T is a touring motorcycle, it features a wide handlebar, comfortable ribbed seat and conventional exhaust system.

Just like the XPulse 200, the 200T too features LED lights at the front and back.

It gets the same digital instrument cluster as the XPulse 200.

In terms of suspension, it gets telescopic forks at the front and a 7-step preload adjustable monoshock at the rear.

Powering the touring motorcycle is the same engine as the XPulse 200.

The XPulse 200T comes with a nifty luggage rack at the back, which should keep your luggage in one place.