The new Rally Kit for the XPulse 200 will make your bike properly competitive off the road! 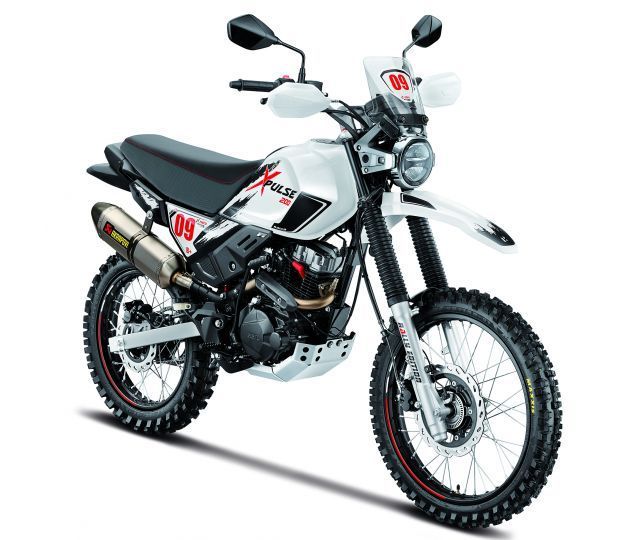 Hero MotoCorp had a rather unimpressive lineup at this year’s EICMA. The Xtreme 1.R Concept with its puny-looking air-cooled engine with oil-cooler didn’t turn heads either. But what really stood out in its stall was the XPulse 200 with the Rally Kit developed in collaboration with Hero MotoSports Team Rally itself. It will be offered in early-2020 for a price of around Rs 50,000, which makes it half the cost of the stock bike (Rs 1.05 lakh, ex-showroom Delhi). The kit aims to help budding professional offroad riders make the most of their XPulse 200. Here’s a detailed explanation of what it’s all about in pictures:

The Rally Kit for the XPulse 200 makes the bike look a lot more butch overall. Also, the showcased model features neat-looking Rally livery complete with the blood group and competition number. As you can see, the front fender is gone but the beak-like offroad fender has been retained.

The stock 37mm telescopic fork has been replaced with a longer fork that’s fully adjustable as well. The stock 190mm stroke itself was good enough and with the extra travel (Hero hasn’t revealed how much, exactly), going offroad fast will be an easier task.

The 21-inch front wheel is shod with Maxxis knobby tyres, which should offer better grip off the road than the stock Ceat Gripp dual-purpose rubber. The brake is stock, though. It’s a 276mm petal disc with a single-channel ABS.

Hero has raised the handlebar’s height using risers so that it is easier to control while standing up and riding offroad. We’d have liked it if the stock handlebars featured additional bracing for better rigidity so that the handlebars can retain the shape (to an extent) even in case of a fall.

The handguards are stock and are made out of plastic. It would have been better if Hero offered fully looped ones with aluminium bracing, which can improve the protection considerably.

Hero has replaced the stock seat with a flatter unit designed in a way to ensure easy position change while offroading.

Sadly though, Hero has retained the internals of the engine intact, apart from the exhaust. However, the sprockets have been changed. The Rally Kit comes with 12 teeth unit up front and 40 teeth at the rear, which should ensure greater low-mid-range grunt. Also, note the bear-claw footpegs, which have been lengthened to accommodate adventure riding boots.

The Akrapovic exhaust should make the engine feel less restrictive. Unfortunately, this exhaust is not a part of the Rally Kit but Hero is trying to work out a deal to provide one.

Thanks to the longer travel front and rear suspension, the ground clearance has gone up from 220mm to 275mm!

Hero has extended the length of the side stand to match the taller suspension. Also, the rear fender has been replaced with a shorter one, which not only reduces the weight but also makes the bike look a whole lot cooler!