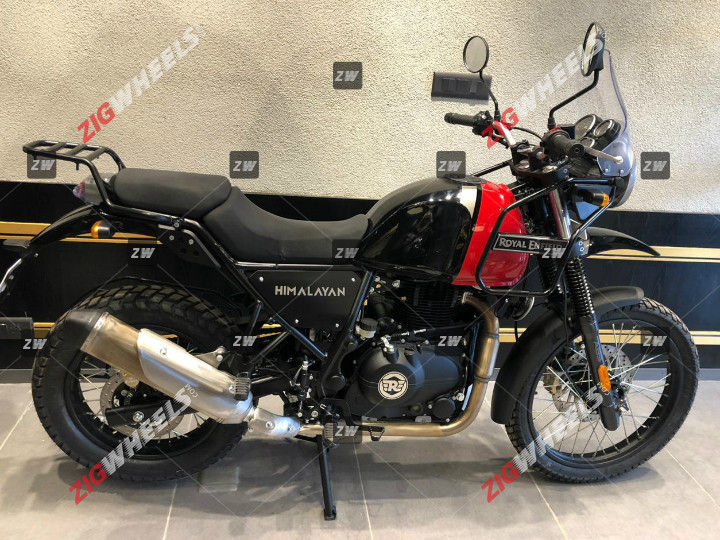 After teasing us on its official site a while ago, the BS6-compliant versions of the Royal Enfield Himalayan have started reaching dealerships. The new Himalayans look identical to their BS4 counterparts aside from the presence of the new cat-con. It also dons the new colours that were showcased at EICMA 2019. We expect Enfield to hike the price of the Himalayan by Rs 6,000-Rs 8,000. According to our dealer sources, the bike will be officially launched in the coming week.

While you cannot spot it visually, the Himalayan BS6 also gets switchable ABS. This off-road friendly feature can be confirmed thanks to the toggle switch (circled red in the above photo) found on the revised instrument panel. This makes the Himalayan the most affordable adventure tourer to get switchable ABS, taking the title away from the BMW G 310 GS.

There are a few more telltale signs, one of which could be the engine malfunction light, arriving thanks to the presence of an OBD sensor. The ‘hazard’ toggle switch (circled red in the above photo) returns, as it is located below the engine killswitch.

Given that the Himalayan’s 410LS motor was already running a fuel-injection system, the changes necessitated to meet the BS6 emission norms won’t be too taxing on the engine. Expect a marginal drop in power, if any. The BS4 model pumps out 24.5PS and 32Nm.

Mechanically, no further changes are expected on the Himalayan BS6. The long-travel suspension units will be retained as will the 21-/17-inch spoke wheel setup. It continues to run on the same CEAT Gripp XL rubber.