The Cobra 321RR was leaked via type-approval documents, hinting at an imminent launch in the Chinese market 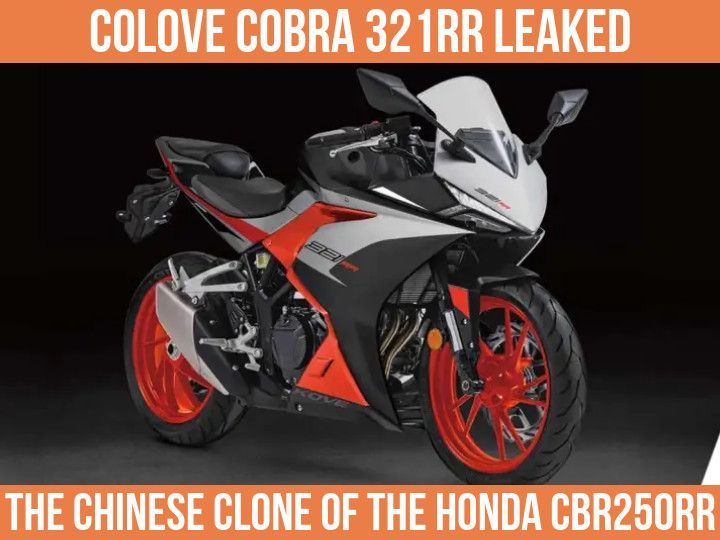 Colove Motors, a Chinese bike maker notorious for making clones of famous motorcycles, is set to launch its full-faired entry-level sportbike, the Cobra 321RR, in its homeland. This was revealed in type-approval documents filed for its sale by the company.

The Colove 321RR is essentially a fully-faired version of Colove’s naked offering, the Cobra 321R. And according to the documents, the 321RR borrows most of its components like the USD fork, exhaust, engine, and braking setup from its naked sibling. It is powered by a 322cc, twin-cylinder engine putting out 39.5PS and 28.5Nm, and has a claimed top speed of 170kmph.

These numbers coupled with the impressively low 151kg kerb weight of the Cobra 321RR should make it quite fun to ride. For reference, the new and lighter 2022 KTM RC 390 has a dry weight of 155kg.

What it does differently, though, is the design. Unlike the KTM 690 Duke-inspired design of the Cobra 321R, the full-faired Cobra 321RR borrows its design cues from the Honda CBR250RR. This is quite evident from the overall silhouette of the bike, even though some elements like the headlamp and tail have been reworked. Nevertheless, the Cobra 321RR does come off as quite appealing.

Being a Chinese bike, there’s no shortage of features too. You get single petal discs at both ends with radially mounted Nissin calipers, ABS, all-LED illumination, split seats, and a TFT instrument cluster. The TFT doesn’t seem too informative and looks a little chintzy.

Full details of the Cobra 321RR will be revealed once it is officially launched. And since this product is mainly for the Chinese market, it will probably never make it to Indian shores.