The Top 5 Most Powerful Electric Motorcycles

Electric motorcycles are known for their insane power figures, but which ones take the top spot? We find out 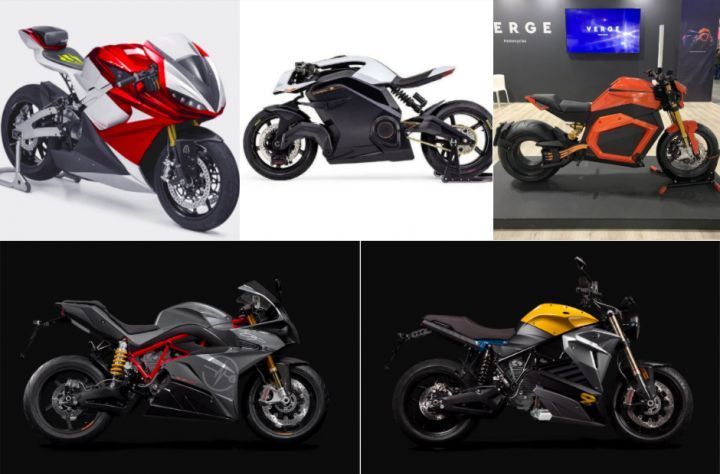 Electric two-wheelers are all the rage right now. We see electric two-wheelers in different sizes and form popping up in some corner of the world almost every day. While most manufacturers are either focusing on electric scooters or entry-level electric motorcycles to cater to the masses whose numero uno priority is range, there are a few bike makers who are prioritising power. Luckily for us, there are a few electric sportbikes, which give a whole new meaning to the term ‘speed.’ Spoiler alert: We are dealing with motorcycles with above 100PS and mind you, these are not traditional motorcycles. These bikes have insane power and torque figures, that are accessible from the go.

Let’s start with the most powerful of the lot, the Lightning LS-218, ‘cause why not? Lightning wanted its first bike to be as electrifying as possible. Behind the sports bike-like design, lies sports bike-beating components. The fully adjustable Ohlins suspension at either ends and the brakes are from Brembo. However, the party piece of the LS-218 is its electric motor. It is powered by a 150kW liquid-cooled motor that produces 149kW of power and 228Nm of torque. We know electric motors produce a lot of torque, but the LS-218’s torque figure is more than what you get in a Maruti Suzuki Ciaz!

With such power at disposal, Lightning thought of sending it to the Bonneville Speedweek in 2018 where the LS-218 hit 351kmph, making it the fastest electric motorcycle! So, Lightning has created a motorcycle, which can demolish established petrol-powered motorcycles on a drag strip and can be used as an urban commuter as well. The company offers three battery packs: 12kWh, 15kWh and 20kWh that offer a range from 160km to 290km, which is quite astonishing for a performance-oriented electric motorcycle. Want to hear the whizzing sound of the electric motor when it’s made to pass the 250kmph barrier? Here you go.

At the 2019 EICMA, Energica took the wraps off the all-new Ego+, which is the brand’s most powerful and fastest electric motorcycle yet. Now, Energica is lending its motorcycles for MotoE, which should give you a hint of what to expect from it. The Ego+ is essentially the Ego with a bigger battery and more power. It features a 21.5kWh lithium-polymer battery whereas the standard Ego is powered by a smaller 13.4kWh lithium-polymer battery.

While the peak power between both variants remains the same at 107kW, the Ego+ has 5Nm of extra torque at 215Nm compared to the standard model. Energica has capped the top speed at 240kmph. And to keep you on the ground while doing these kinds of speeds, the Ego+ plus gets a tonne of rider aids such as four-level regenerative braking maps, a six-level traction control system, and dual-channel ABS with rear-wheel mitigation system.

Moreover, Energica is also offering a DC Fast Charge Mode 4, which can juice up the Ego+ up to 80 per cent in just 40 minutes. And if you keep it plugged in for about an hour, you have 400km of range at your disposal! Yes, 400.

The motorcycle that you are seeing on your screens is not a concept, it’s the production-ready Arc Vector! It’s a limited-edition motorcycle with only 355 units available worldwide priced at an eye-watering $118,000 (Rs 84 lakh). And it does justify its high price tag. Well, kind of. The 399V electric motor belts out 102kW of power and 85Nm of peak torque. Arc claims that the Vector can go from nought to 100kmph in just 2.7 seconds and has a top speed of over 200kmph. It features a carbon fibre swingarm, Ohlins suspension at both ends and braking hardware by Brembo.

For Rs 84 lakh, you not only get a superfast and an angry-looking motorcycle, but also a high-tech helmet with an in-built head-up display! There’s also a riding jacket, which has haptic sensors to alert the rider if there’s a vehicle in the blind spot.

Yes, there’s another Energica in this list. Called the EsseEsse9+, its motor has a rated power output of 80kW and 200Nm of torque. This neo-retro has a claimed top speed of over 200kmph and a range of 400km! For an electric motorcycle, this sort of range is nothing short of insane. In terms of cycle parts, it gets fully adjustable suspension at either ends and disc brakes at both ends with dual-channel ABS offered as a standard fitment. Feature-wise, it gets the whole lot, we mean six-levels of traction control, cruise control, remote start, heated grips and Bluetooth connectivity.

There’s a chance you might have never heard of this motorcycle until now, and that’s ok; we don’t blame you for not keeping an eye at the 2019 EICMA. This very orange electric motorcycle, which could be a proper fit for the next Tron movie, houses an 80kW motor. But that’s not its talking point. You know, we have seen electric vehicle manufacturers claiming some insane torque figures, but Verge TS is on another level. Because the bike maker says that the electric motor makes 1000Nm of torque. No, that’s not a typo. Now, the manufacturer hasn’t revealed the 0-100kmph time, but it’s fair to assume that it will be under 4 seconds. And if you are worried about its range, the bike maker has got your back because it gets a range 300km in the city and 200km on the highway. We can’t wait to see this bike spinning its wheel on a dragstrip.

Now, comes the sad part. The chances of these bikes coming to our shores are bleak, but soon, we will electric sportbikes in the form of the Ultraviolette F77 and the Emflux One.