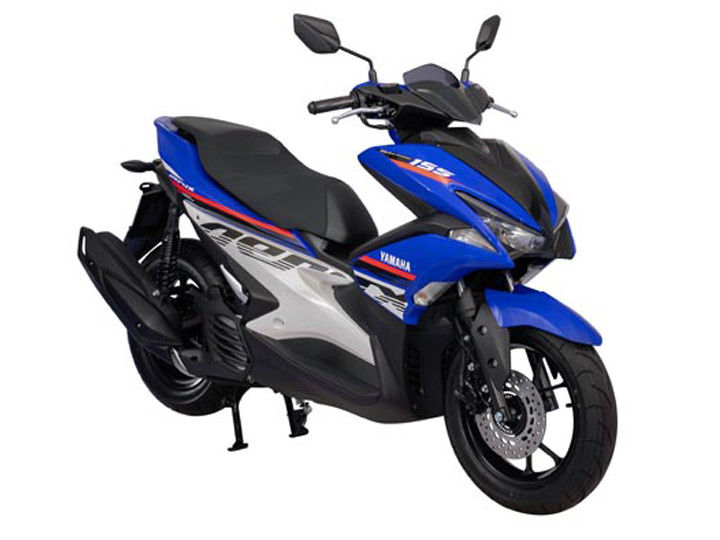 Yamaha’s international portfolio has a little something for almost everyone. It’s latest offering is the 2020 Yamaha Aerox, a scooter powered by the YZF-R15’s engine. The scooter has received significant updates for 2020 including more features, a new engine as well as cosmetic changes. Here’s a compilation of images that’ll give you a better idea of what the scooter’s all about:

To start things off, the Aerox features an ‘X’ shaped design emphasising its crossover DNA. Yamaha has essentially taken the best elements from a sportbike and merged it with that of a maxi-scooter.

The characteristics of a sportbike can also be on the scooter's sleek side panels which integrate with the turn indicators.

It features a full-LED headlight running LED DRLs and an LED tail light with conventional bulb indicators at the rear.

The rider’s cockpit is greeted by a smartly designed, full-digital instrument console complete with Yamaha’s Y-Connect application that allows riders to pair their phone to the scooter.

The app enables riders to view calls and messages on the console and share details of rides with other Y-Connect riders via the app. Other notable features include service schedules, error codes, and last parked location.

You even get a mobile charging socket placed in the glove box on the front apron.

Oh and just in case you’re wondering, you don’t necessarily need a physical key to start the scooter as it features keyless ignition.

The designers at Yamaha have thought about every little creature comfort. Refueling, for instance, can be done without even getting off the scooter as the fuel tank is placed in the mid-tunnel behind the front apron. Convenience at its best! The larger fuel tank now has the capacity to hold 5.5 litres, instead of the previous 4.6 litres.

It has loads of underseat storage too, 25 litres to be precise, which is good enough for a half-faced helmet and some knick-knacks.

The Yamaha Aerox is powered by the same 155cc, liquid-cooled, single-cylinder fuel-injected engine with variable valve actuation as seen on the R-15 V3. Although, it's been retuned to make 15PS at 8,000rpm and 13.9Nm at 6,500rpm on the Aerox. Thanks to the new motor, the scooter makes 0.3PS more power. Torque, though, has dropped by 0.5Nm.

In terms of hardware, the Aerox comes equipped with a telescopic fork and twin gas-charged shock absorbers.

The scooter is anchored by a disc brake up front and a drum brake at the rear.

Sadly, none of this matters, as the scooter will most likely never see the light of day here in India. It’s specifically designed for markets such as Malaysia and Indonesia. As for its price, it costs Rp. 1,45,641, equivalent to Rs 1.45 lakh in India.